What Budget 2009 Means For You

The Budget doesn't seem to have made much of a difference as far as the finances of middle-class individuals are concerned. It has, however, benefited individuals in the higher salary bracket. 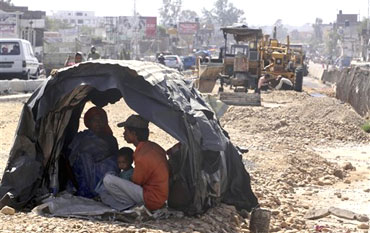 The Budget doesn’t seem to have made much of a difference as far as the finances of middle-class individuals are concerned. It has, however, benefited individuals in the higher salary bracket.

Presenting his first Budget after taking over, Finance Minister Pranab Mukherjee announced two major steps that are set to have a positive impact. It has opened the ambit of education loans to students opting for vocational courses and has cleared the air on the taxation process of the New Pension System. Also, the Budget has paved the way for rolling in tax reforms.

Here are the details of the major changes that the Budget is set to effect.

Impact: Although the exemption limit has been raised, the net savings would amount only to about Rs 1,000 for women and other taxpayers and Rs 1,500 for senior citizens.

The surcharge of 10 per cent on income exceeding Rs 10 lakh removed.

Impact: This will translate into gains for taxpayers with income above Rs 10 lakh. Their net savings will be at least Rs 30,000 per year.

In respect of maintenance, including medical treatment, of a dependent who is a person with severe disability, the deduction limit under Section 80DD is proposed to be increased to Rs 1 lakh from the present limit of Rs 75, 000.

Impact: The limit for normal disability (up to 40 per cent) remains the same at Rs 50,000. It is only for severe disabilities (at least 80 per cent) that an individual can avail the additional benefit.

The Budget proposes that the Fringe Benefit Tax on the value of certain fringe benefits provided by employers to their employees is abolished henceforth.

Impact: This will take you back to the pre-FBT era. FBT was supposed to be paid by the employers. However, in most cases, they passed it on to their employees.

The income tax department has been asked to work on SARAL-II forms.

Impact: This will make income tax returns simpler and user-friendly.

Goods and Services Tax on the cards

The introduction of GST is proposed to happen by 1 April 2010. The broad contour of the GST model is that it will be a dual GST comprising of a Central GST and a State GST. The Centre and the States will each legislate, levy and administer the Central GST and State GST, respectively.

The Budget clarifies that the NPS will continue to be subjected to the Exempt-Exempt-Taxed (EET) method.

Impact: This makes the investment qualify for Section 80C benefits. The annuity, however, remains fully taxable.

To enable students from economically weaker sections to access higher education, the Budget proposed to introduce a scheme to provide education loans full interest subsidy during the moratorium period. The scheme will cover loans taken by students from scheduled banks to pursue any of the approved courses of study in technical and professional streams from recognised institutions in India.

Impact: Education loans will now be available to a larger section of students. It is estimated that over 5 lakh students would avail this benefit.

Section 80E of the Income Tax Act provides for a deduction in respect of interest on loans taken for pursuing higher education in specified fields of study. The Budget proposes to extend the scope of this provision to cover all fields of study, including vocational studies pursued after completion of schooling.

Impact: Even the parents can avail Section 80E benefit.

Impact: For existing as well as potential homebuyers there was nothing to look for in the Budget proposals. However, the indirect benefits to the real estate sector cannot be ruled out largely due to the emphasis on infrastructure development.

A new project for modernisation of the employment exchanges in public-private partnership will enable a job seeker to register online and approach any employment exchange. Under the project, a national web portal with common software will be developed. This will contain all the data regarding availability of skilled persons as well as requirements of skilled persons by the industry.

Impact: Information gathering will become much easier both for the employer and the employee.