'We Will Accomplish Olympic Mission'

'Mujhe dil se lagta hai ki 100 per cent hum semi-finals ke liye qualify karenge. Look at the last two Olympics where we came really close to winning a medal. With such an experienced team I am confident we will do it this time' 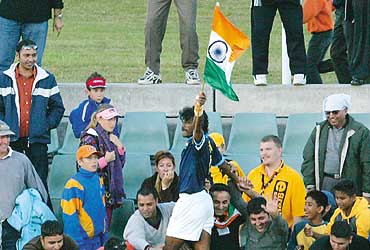 Mercurial forward Dhanraj Pillay, hoping to play in a record fourth Olympics in August, expressed confidence he would be selected in the Indian team to play the Athens Games.

"As long as I am fit and playing well, I am confident I will be selected. I am 100 per cent fit and the training in US has benefitted me immensely. I feel fitter, my speed has improved and have also regained some lost strength," he said.

Pillay, whose omission from the first probables' list for the Olympics created a big controversy, was recalled last month under pressure from former players and hockey fans.

The 36-year-old former Indian captain said that eight-time gold medallists India would definitely qualify for the semi-finals at Athens.

"Look at the last two Olympics where we came really close to winning a medal. With such an experienced team I am confident we will do it this time. Our main aim is to perform well in the Olympics and win a medal.

Pillay was also confident of a good showing in the four-nation tournament in Amsterdam, which also features world champions Germany, Olympic champions Holland and arch-rivals Pakistan.

"I just want our performance to be great so that our Olympic mission can be accomplished, for which we have been preparing hard," he said.

A 16-member Indian team along with eight stand-byes will be picked for the Olympics after the Holland meet.

On the three week American experience, where the Indian probables underwent rigorous training at the Athletes' Performance Centre in Tempe, Arizona, Pillay said "The guys have used the opportunity well."

The star player was extremely satisfied with the fitness training stint at Tempe.

"America's best athletes train there and we were lucky to have got a chance to be there. The trainers were really good and professional. We learnt a lot from them," he said.

Pillay was also vocal on the benefits of psychological training at the camp.

"We talked to them (the psychologists) about how we feel. They asked us to forego all negative thoughts and concentrate on what we have to do on the field," he said.

"They gave examples of America's best players like ace golfer Tiger Woods and basketball icon 'Magic' Johnson and told us what these guys have said."