We Lost To A Superior Unit

India was a better team and there is no shame in losing to a side that displayed thorough professionalism and commitment in all the departments with such consistency. 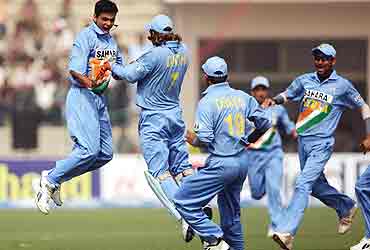 The series has already been decided. But there will be plenty at stake when the teams lock horns in the fifth and final one-day international in Karachi on Sunday.

India would be hoping to extend the winning spree that would enable them to start the home series against England with a more positive, aggressive and confident note. Sunday's game should also be an opportunity for some untried players to show their worth at the international level and strengthen their places in the Indian team for upcoming assignments.

Pakistan, on the contrary, would be hoping to pull one back that would surely minimize their pain and disappointment. It is always healthy to finish any series on a winning note, no matter if it has already been secured. It helps to restore the players' confidence and self belief for the next series, which in Pakistan's case is a tour to Sri Lanka.

Coincidently, the traditional rivals will be engaged in two battles at different levels on the same day -- the seniors in Karachi and the juniors in the ICC under-19 World Cup final in Colombo.

Rahul Dravid was quick to wish his team the best of luck but Inzamam-ul Haq forgot. Maybe, the pressure of the critics and the dismal performance of his team has not allowed Inzy to look anywhere else except his own unit.

Nevertheless, Inzy, the humble, caring and modest character that he is, announced a monthly stipend of Rs 10,000, on behalf of his team, for former Pakistan hockey goalkeeper Mohammad Qasim who has been diagnosed with last degree cancer.

It was a great gesture that showed that this Pakistan team cares for its fellow sportsmen. Qasim is in his late 20s and represented Pakistan in the World Cup, Olympics and Champions Trophy.

Reverting to cricket, Dravid won the all-important toss in Multan and Rudra Pratap Singh and Irfan Pathan set up an easy victory for India. The two bowlers made optimum use of the good conditions and R P, although conceded too many wides, proved dangerous when he pitched the ball in the corridor of uncertainty.

The fielders backed their bowlers and ensured that India nailed Pakistan when they were down and struggling.

t has been an amazing turnaround for the teams. India won three games on the trot after pulling defeat from the jaws of victory in the Karachi Test and then lost the high scoring game in Peshawar.

Pakistan, on the contrary, had been playing excellent cricket and winning almost everything until they lost their way so badly that made them look a mediocre side.

Pakistan's problems kept multiplying as the series progressed. All the top batsmen lost form at the same time and the injuries to Shahid Afridi and Shoaib Akhtar imbalanced the team and strategy.

And when things start to go wrong, there is no end to it.

For a change, Inzamam planned to chase the target in Multan by naming Imran Farhat as the super sub. But he lost the toss and then slumped to 29 for four, and therefore, was left with no option except to use Farhat to stabilise the innings.

The planning was correct though I disagree on the choice of Farhat. I believe Faisal Iqbal should have been the right candidate because he is a specialist middle order batsman and secondly he had scored a century in a pressure situation in the Karachi Test.

A score of 161 against a quality batting lineup like India cannot be defended and even though Sachin Tendulkar got a third-ball duck, Dravid made sure there were no further crumbles.

But let's face the fact that India was a better team in the one-day series and there is no shame losing to a team that displayed thorough professionalism and commitment in all the departments with such consistency.

Pakistan could have done better but maybe the back-breaking season took its toll.

Pakistan is certainly not a team that can be discounted. It has proved its critics wrong over the years and would surely do it again. But the bottomline is that the Pakistan team management needs to review the situation, do some soul-searching and address the real issues so that the team hits back in the right direction.