We Have To Decide How To Differentiate Terrorists From Innocents: Aung San Suu Kyi On Rohingya Muslims

"You in India would be well versed with this," she said. 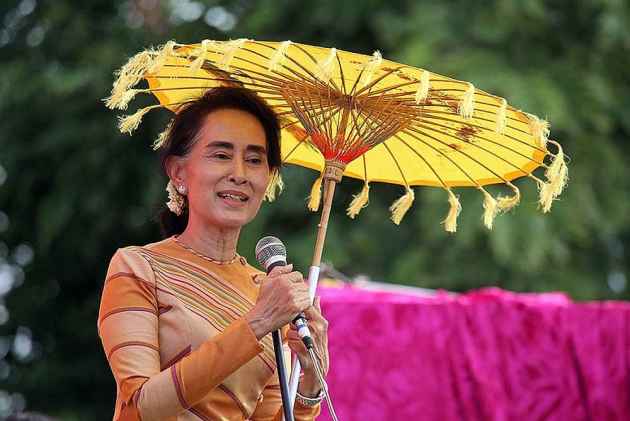 After worldwide outrage on Nobel Peace Price winner Aung San Suu Kyi's prolonged silence on the atrocities on Rohingya muslims in the country, the State Counsellor of Myanmar has said it is the 'biggest challenge we had to face'.

"It is a little unreasonable to expect us to solve the issue in 18 months since the situation in Rakhine has been such since many decades and go backs to pre-colonial times ," Suu Kyi told news agency ANI, adding that they have to decide how to differentiate terrorists frm innocents.

"You in India would be well versed with this," she said.

The UN had recently called  for her government to end violence that has forced 146,000 Rohingyas to flee to Bangladesh.

Even though Suu Kyi acknowledged the duty to take care of "our citizens", she also said "our resources our not as complete and adequate as we would like them to be."

Suu Kyi on Wednesday had said the global cry over violence on Rohingya Muslims was fuelled by a 'huge iceberg of misinformation.'

Rohingya refugees have poured over the border with Bangladesh, fleeing a massive security sweep in western Rakhine state by Myanmar forces following a series of deadly ambushes by Rohingya militants on August 25.

Suu Kyi's government has faced growing international condemnation for the army's response with refugees bringing with them renewed stories of murder, rape and burned villages at the hands of soldiers.

But in her first public comments since last month's ambushes, she said sympathy for the Rohingya was being generated by "a huge iceberg of misinformation calculated to create a lot of problems between different communities and with the aim of promoting the interest of the terrorists".

The comments were made in a statement put out by her office following a call with Turkey's president Recep Tayyip Erdogan who has been particularly critical of Myanmar's treatment of the Rohingya, dubbing it a "genocide".

But Suu Kyi defended her government's actions saying her administration was "defending all the people" in Rakhine state.

Myanmar's Rohingya are the world's largest stateless minority and have lived under apartheid-like restrictions on their movement and citizenship for years.

More than 200,000 Rohingya have fled to Bangladesh since October.

That includes 146,000 in the last two weeks, piling huge pressure on an impoverished neighbour that already hosted 400,000 Rohingya who had fled Myanmar over the past four decades.