'We Have Broken The Trend Of Hypocritical Politics'

It has happened for the first time in J&K that a ruling party continued to speak on issues which it used to while it was in opposition, says the outgoing chief minister, adding that he sees the government, under the new Congress CM continuing smoothl 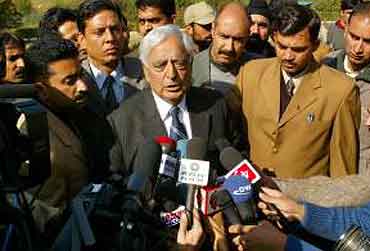 Nagendar Sharma: Mr Sayeed, after having been the chief minister of one of the most controversial and troubled states, how do you see the politics of J&K today after having demitted office?

Mufti Mohammad Sayeed: We had promised an environment of peace to the people of the state who had been suffering for the last 10-15 years. Our thrust during the three years was on the functioning of democratic institutions in the state and on the democratic process. We made the security forces accountable for human rights violations in the state and put an end to their high-handedness, which existed in the state before 2002. Our endeavour was to start a peace process in the state and give importance to the democratic institutions - and we have done it. Today, an environment of peace exists in the state. Marriage ceremonies go on till till midnight now - was it possible earlier? More than a millions pilgrims have undertaken the Amarnath yatra this year. Such facts speak for themselves.

Listener from Ambedkarnagar (UP) : Mufti sahib even during your tenure, terrorist activities in J&K continued, but you adopted a soft approach towards militancy, which proved beneficial also to some extent, and these days Indian and Pakistan leadership is moving forward on the confidence building measures (CBMs). Do you think Ghulam Nabi Azad would follow the roadmap you are leaving behind?

Mufti Mohammad Sayeed: Well, the alliance which is ruling Jammu & Kashmir at the moment, is an alliance of four-five partners of which PDP and Congress are the major constituents. During the past three years, there has been a decline in militancy in the state. Even if there is an incident, it is dealt with sternly, but life does not come to a stop any more. The situation is normal in the state and the people are participating in developmental activities. We have opened four new universities in the states and the drop-out from primary schools is not more than four percent now, so an environment of normalcy exists. The Congress-PDP government has the capacity of taking this process forward and I have no doubt whatsoever on this score.

Mufti Mohammad Sayeed: We have been trying since five-six years that these walls of hatred be pulled down. The biggest success of our government was the starting - the first time since 1947 - of Srinagar-Muzaffarabad bus on April 7 this year. We wanted this Karwan-e-Aman [the caravan of peace] to run daily, instead of twice-thrice a month so that people on both sides of the border can freely meet each other. These measures - the bus, opening of relief camps along the LoC - show that we are moving on an unprecedented positive direction. South Asia, and particularly the SAARC region, could eventually emulate EU countries, where citizens of member countries can travel without a visa, I am confident we would have a visa free travel in SAARC also in the coming days.

Nagendar Sharma: Mufti Sayeed sahib, there is a feeling that opening of relief camps along the LoC is the maximum that India and Pakistan could achieve, which is why both the centre and J&K government are projecting it as a big achievement...

Mufti Mohammad Sayeed: I do not think so and nor have I got any impression of this kind to the best of my political experience . The whole environment in the region has changed and people would not tolerate any diversion from the real issue of good relations between the two countries. I have met both Prime Minister Manmohan Singh as well as UPA chairperson Soniaji along with many other central leaders. All of them really see it as a great opportunity, perhaps a rare one, to improve relations. The real thing is that the desire for friendship is so strong that any attempts to thwart it would not be tolerated now and I see a commitment in Indian leadership to have good neighbourly relations with Pakistan.

Listener fro UAE : Mufti sahib, how much you think you succeeded in bringing those attracted by militancy in the mainstream, and your efforts like having relief points along the LoC, would the Congress-led government continue these ?

Mufti Mohammad Sayeed: The earthquake in Pakistan and J&K was a humanitarian problem, and our Prime Minister was also very keen that those affected should be provided all possible help. Now, some quake-affected areas in Pakistan are unapproachable by road or any other means of transport -- even helicopters are not effective in providing relief there. In such difficult areas we were in a position to help the victims. It is with such an approach that the decision to open the relief camps along LoC has been taken. So far as your question on J&K government’s direction is concerned, well, this is a coalition of four-five parties and the chief minister has to carry along all the sections. I do not think that the Congress has any doubts regarding the peace process -- remember, we are with the Congress, and this process would continue.

Nagendar Sharma: Mufti sahib, the new chief minister Ghulam Nabi Abad has said he would like to carry along all sections, including those outside the coalition, those who did not contest elections and also those who are outside the mainstream. What is your reaction?

Mufti Mohammad Sayeed: Well, while talking about J&K, you have to keep in mind the ground realities. What he has said is a good step. The reality of a state like J&K is that you would have to take everyone along in running a government, and this is the biggest challenge as well. I think Mr Azad’s statement is a good sign. I say involve and talk to everyone, whether they are in coalition or not. Without involving everyone you cannot work in J&K.

Listener from Delhi : Mufti sahib, after becoming the chief minister, you had said in this very same programme that healing touch policy would be a success. Could you say the same now, especially when people like Hurriyat are also reluctant to talk to government of India?

Mufti Mohammad Sayeed: My friend, look at the change in the situation of the state, it would not have been without an internal change that Prime Minister Manmohan Singh would have agreed for a bus between Stringer and Muzaffarabad. When we came to power, [Syed Ali Shah] Geelani was in a jail in Ranchi, we ensured that he got treatment in Mumbai - same for Yasin Malik. Today you see Hurriyat delegations going to different places freely - all this is a result of 'healing touch'. It is not merely a policy, it is a complete doctrine of good governance, democratisation of powers and people’s voice being heard. We made an endeavour to improve the environment in the state, and nobody can deny that.

Listener from Kanpur : Mufti sahib, did you succeed in checking militancy in the state?

Mufti Mohammad Sayeed: Militant activities in the state are on a consistent decline now. Even if an incident takes place it is dealt with sternly now, but it does not affect public life anymore. During our three year rule, these activities did not get public support, and even if such elements tried to create disturbances they were ignored by the people. Militancy cannot survive without popular support and it is not there in the state now. A fish cannot survive without water and nor can militant activities if people do not want them. What we tried was to win the hearts and minds of the people, our effort was to see that people do not turn to militancy and I think we succeeded to a large extent. The booming tourism in the state is an example of the normal situation prevailing in the state. Kashmir is a show window of India, and the increasing number of tourists visiting the state now have become ambassadors for other parts of the country and world too.

Nagendar Sharma: Mufti sahib, you have been advocating strong friendly relations with Pakistan, is it possible and would Kashmir really benefit from that ?

Mufti Mohammad Sayeed: For the first time in 57 years, the relations between India and Pakistan are now J&K- focussed. Starting of Srinagar-Muzaffarabad bus on April 7 this year and now the agreement to open relief camps on five points along the Line of Control from November 7 shows that people of J&K are now getting importance in relations between the two countries. But everything cannot happen at once. I am emphasising on the continuance of the peace process, regular dialogue and its speed.

Nagendar Sharma: But do India and Pakistan trust each other to the extent that any result of ongoing peace process can be expected?

Mufti Mohammad Sayeed: Politics is an art of the possible - of possibilities and making things possible.  If both the countries are coming close to each other, it is because of the ground reality prevailing in India and Pakistan. There is a strong desire for friendship among the people on both sides. It is now a compulsion for the ruling establishments on both sides as people are forcing them to have friendly relations. It is a reality which is now being realised. This is a window of opportunity and a golden chance which cannot be allowed to go waste by either country.

It is a fact that at the moment both countries have hard positions. India has its own view on J&K and so has Pakistan. In such a scenario, it is not important that all that is being talked about between the two countries be made public before time. I feel that a concrete progress on the Kashmir issue between India and Pakistan is very much in the offing. I am hopeful that a picture would emerge in the coming days which would help in both countries moving away from the status-quo and eventually leading to break it. This would happen gradually and not in one go.

Listener from Jammu : Sir what is the future of Ghulam Nabi Azad led Congress-PDP government in the state?

Mufti Mohammad Sayeed: Congress and PDP came together on certain issues. This is a programmatic alliance, in which we have other partners also. I see this government continuing smoothly, as both Congress and PDP have mature leadership in the state, they would adhere to the programme promised to the people of the state. This vehicle would continue to roll on and would not sit idle. I am optimistic and I do not think the Congress party would deviate from the alliance programme. All of us are together for the well being of the state.

Nagendar Sharma: Mufti sahib what is your future role in politics ?

Mufti Mohammad Sayeed: Well, I am in politics since 1959 - you must understand, I have been in the thick of things for almost five decades now. The PDP has good existing and emerging leaders who would take the party forward. No political work would stop, irrespective of whether I am around or not.

Nagendar Sharma: Would the PDP resort to open criticism of its senior alliance partner if the Congress deviated from the common minimum programme?

Mufti Mohammad Sayed: It is for the party president Mehbooba Mufti and her colleagues to decide. I have told them that the manifesto which we have tried to implement should continue. It is the people's agenda which we have followed there, and there should be no compromise with that. It has happened for the first time in J&K that a ruling party continued to speak on issues which it used to while it was in opposition. We have broken the trend of hypocritical politics in the state.