Now that their long-cherished war has started, Bush and Blair feel they no longer need to spit and polish their carefully fabricated moral arguments any more. 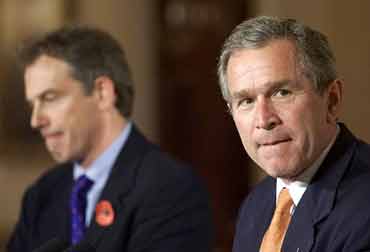 Now that their long-cherished war has started, Bush and Blair feel they no longer need to spit and polish their carefully fabricated moral arguments any more. The boys have gone in. The ‘shock and awe’ is being delivered after the surgical strikes. The battleground has been prepared to Pentagon’s satisfaction. So why bother with arguments?

Jingoism will have its own momentum, as banners carried in counter-demonstrations against the anti-war activists in San Fransisco showed yesterday - "Support the US or Shut up". Here in Britain, I watched a veteran of WW2 being heckled as a traitor as he spoke about why he was against this war. As my students occupied the centre of Newcastle yesterday, I saw their fellow students abuse them and proclaim "How do you think Britain got to where it is now? We need war to show them who is boss."

Misinformation, fear and a potent mix of racist supremacism have been stoked carefully. No wonder the aggressors have abandoned the arguments for a while. Instead, they gloat openly about their true aims.

Take the US defence analyst assessing the action on BBC on the morning of March 21. He ended by saying he couldn’t see how Iraq’s army could stop the Anglo-American, sorry,‘coalition’ troops from taking Basra and Baghdad shortly. The Iraqi force, he said, was mediocre and had been cut off from military technology for 12 years while the US had invested more than any country in the world in hardware for the new millennium. It could not be a contest.

So true, and everything that the anti-war activists have been saying all along. That Iraq is not a military threat to its own neighbours, let alone Britain and the US. But did we see the analyst in the countless debates held on television and radio in the six-month build up to war? No. then we were treated with the spectacle of sometime-historians like Andrew Roberts in Britain who said on Newsnight programme that Iraq was a greater military threat to the West than Soviet Union ever been (admittedly to guffaws by Jeremy Paxman and British army officials).

So, if Iraq is not a military threat, then maybe it had to be attacked to uphold the authority of the UN? Have we not been told, till we were sick, that Tony Blair had tried to drag the US down the UN route? If only it weren’t for those cheese-eaters across the channel? Now we must support the US attack because it was in the interest of the UN and resolution 1441?

But here comes Richard Perle in the Guardian on March 21st with 20 point bold headline above his article - ‘Thank God the UN is dead’. Perle, to his credit, has never hidden the fact that one of the aims of this American war is to kill the UN in its current form. In the article he gives a succinct summing of the views of this American administration - that it refuses to be bound by international treaties, to tolerate any rivalry from ‘friendly powers’, that it will use military might and initiate regime change whenever it feels like, that it will use its position to buy off nations to construct the figment of coalitions of the willing.

All this, of course, has been public knowledge and clearly outlined on the website of the Project for the New American Century - the think-tank of which Perle and most of Bush’s inner circle were founding members. It fell to poor Tony Blair to try and sell it to the rest of the world that US and Britain were attacking Iraq to uphold UN authority. Within a week, first Rumsfeld and now Perle has not even pretended to be aware of Blair’s lies.

So, not about military threat and not about the UN. Perhaps the war is about ‘liberating’ and restructuring Iraq then? Handing over the administration of the country to its people? Affirming Kurdish autonomy? Along comes the vote in Turkish parliament on the 20th . The long-awaited agreement to let US aircrafts use Turkish airspace is achieved. Now the B-52s taking off from Britain don’t have to go over Africa and mess up their lethal timetable. In exchange, of course, the Turkish troops get ready to move into northern Iraq to secure the Kurdish autonomous area against disturbances.

The Pentagon has initiated ‘surrender talks’ that will spare the Iraqi regular army and the Generals, as well as key members of the Ba’ath party. They will be needed as the new collaborators who will assist General Tommy Franks in his occupation of the country. Dick Cheney’s brazen lies about his company Halliburton’s trade with Iraq from 1998-2001 have recently exposed in Counterpunch and other US newspapers. Surprise, surprise, the company is now at the forefront of the foreign company’s rushing in to ‘hold the oilfields of Iraq in custody for its people’.

Tony is still trying, of course.

In last night’s laughable and irrelevant declaration of war (the war had started the night before with the US ‘surgical’ strikes, and Blair was awakened from his sleep after being alerted by a ITV reporter), he gave us his solemn word that the oil revenues of a free Iraq would be held in a UN trust fund for its people. Listen to your American controllers, Prime Minister, the UN is dead.

Tony has also promised the Iraqis, those who can still hear after tonight’s episode of ‘shock and awe’, that they will have democracy. Just like Afghanistan, where since yesterday, the US stepped up its air campaign of bombing ‘suspected Taliban villages’ on behalf of the extremely popular and freely elected leader Hamid Karzai.

One by one, the empty shells of Bush and Blair’s moral arguments are being casually ejected from their smoking guns. The calculation is they need not bother anymore. The lies now shine bright. And they wonder why the protests show no sign of ending!

Dr. Pablo Mukherjee teaches at the University of Newcastle.