In the video, the soldiers, wearing white jackets can be seen dancing to the song Hawa Hawa, a famous number of Pakistani singer Hasan Jahangir which was first released in 1987. 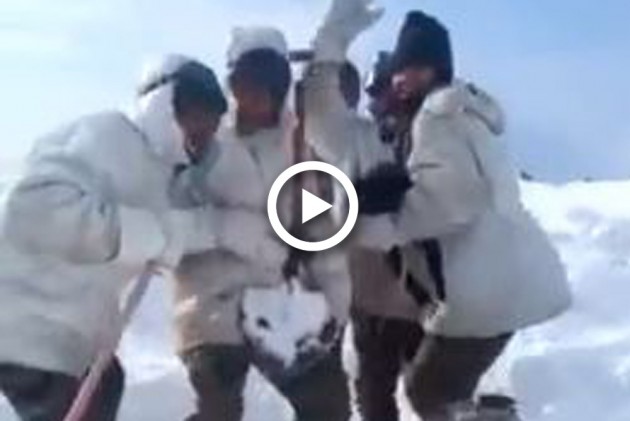 A video of Indian Army soldiers dancing in a care-free jovial manner at a slow-clad high-altitude location is winning hearts on the internet.

In the video, the soldiers, wearing white jackets can be seen dancing to the song Hawa Hawa, a famous number of Pakistani singer Hasan Jahangir which was first released in 1987.

The song is popular across both sides of the Indo-Pak border and a funky version of it, sung by Mika Sing also appeared in the Ileana D'Cruz and Arjun Kapoor starrer Mubarkan which was released was released in 2017.

Love this video of the Indian Army soldiers dancing in a high altitude area on the song ‘hawa hawa eh hawa’ of Hassan Jahangir from 1987. It warms your heart and brings such a smile. This song was quite a sensation once. And continues to be a catchy number! pic.twitter.com/nW38tgJe5F

The video is becoming a sensation on social media where users are appreciating the morale and high-spiritedness of the soldiers. However,  we could not verify the veracity of the video.

The soldiers holding spades and other tools--one is even holding a dog--using them as props for their impromptu dance moves, shake a leg with each other even as they are situated in a tough climatic terrain with harsh weather conditions.

Over the years, several moving stories of Army soldier, on duty in hostile conditions, have garnered tremendous support from the public.

However, this video is eliciting joyous reactions on social media, showing a different side of the Army.