It is high time the government took a call on whether it should continue to pay for the research students and professors who engage in break-India activities and use campuses as base for their divisive agenda. 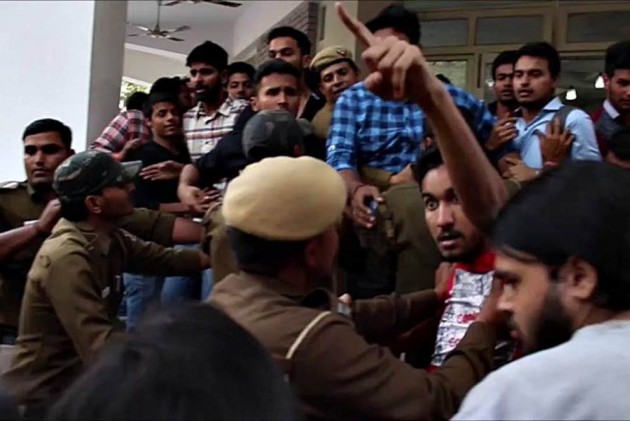 Is it accident or by design that a macabre campus drama enacted in 2016 just before the five state elections is being replayed now, in the midst of another round of elections? It is also possible that we may not hear about it after 11 March as it happened last year after the assembly polls were over. It is neither about the freedom of expression nor about academic debate in university campuses. As in 2016, nobody knows what the real provocation was.

A section of JNU students were agitating denouncing the new UGC norms on making research accountable and time-bound. It did not evoke any response. And suddenly we heard about a seminar that was cancelled and subsequent ruckus at Ramjas College.  Sedition, anti-national slogans and alleged hooliganism by ABVP all come to the fore and a huge protest is manufactured if not on the streets and the campuses, at least on TV studios and newspaper headlines. That it was a fringe group and they sadly lacked the necessary mass base for a relentless agitation came clear when as in 2016, all the political parties opposed to the BJP jumped into the fray.

The most striking feature of the sedition brigade was that their defenders came from the ranks of research students, who live on monthly stipend from taxpayers’ money, the university teachers who again get their salary from the same source and politicians who swear by the Constitution to protect the unity and integrity of the nation. The chant of azadi in a sovereign country in itself is an oxymoron. There is no other country in the world where people enjoy so much freedom. One has to only watch the TV debates where university professors wax eloquent defending treason and traitors.

The pro-terrorists, anti-national groups are trying to mount an operation in the colleges in Delhi University. Political parties of all hues have jumped into the escalating trouble in campuses. Kejriwal and Sitaram Yechury among others have found the scenario too good to give a miss. It is intriguing that the communists who of late and the Congress which were swearing by the constitution and national integrity are finding common cause with Kashmiri separatists and Maoist subversives in their blind hatred for the BJP.

It’s not about colleges. It is politics by other means for the Congress and Communists. Having ceded ideological space to the BJP in state after state, election after election, the Left-Congress combine is looking for causes to pin prick the BJP government at the Centre. What better turf than the DU, right at the capital.

During the Bihar elections, the issue was Rohith Vemula, at Hyderabad University. Kejriwal and Rahul Gandhi rushed to protest the death of a ‘Dalit boy.’ The opposition accused the ABVP of abetting the suicide of the student, who had actually posted several times on the Facebook about his disappointment with the left, including mentioning leaders like Yechury by name. Now, it has been found out that Vemula was not a dalit after all. So could we go back in time machine and amend a whole lot of sentiments and take back all the crocodile tears shed?

To the last T, the hate-BJP campaigners are repeating the strategy. They introduced Umar Khalid into the scene, though he is on bail with the court advising him to mend his ways. The guise was ‘academic’ discussion on Bastar at Ramjas College, in the North Campus. Khalid, for several years has been pursuing study on Bastar Naxalites on government stipend and raises anti-India slogans. When ABVP protested the invitation to him it was withdrawn. Matters should have ended there. But they didn’t. Because the script was being written elsewhere and the students were only playing the designated role.

Suddenly, a section of students of Ramjas College took out protest march, abusing ABVP. It was a provocation. And ABVP countered the protesters, with their own slogans. The two groups clashed.

As per the script, the AISA, SFI, NSUI students rushed to the studios even when violence was on in the campus and the chorus was that the ABVP was provoking violence. One student leader also carried ‘proof’ with her, of the stone that hit her head. There were allegations of beating up women and even teachers. Later, the social media came in by streaming pictures of SFI leader Pradip Bhattacharya beating up ABVP students, even as he waxed eloquent about the so-called ABVP violence.

The teachers had also been lined up. New faces, which had not yet been identified as flag bearers of communists condemned ABVP. The whole campaign was to drum-down into the minds of the public that ABVP was some hooligan outfit.

The Congress-Communists are using students much the same way as terrorists use women and children in the front and fire from behind. LTTE, Kashmiri terrorists all used this strategy.

Having completely lost the political relevance and reduced to an irrelevant political force, both the communists and the Congress are trying to pop up issues to try and divide the society. Their utter failure to provoke the public against demonetization added to their political frustration. With most political analysts, reports and surveys indicating that BJP is posting a resounding victory in UP has unnerved the opposition.

The issue that needs to be addressed is, should the campuses in India be allowed to be platforms for anti-nationals? Should the future of the students be endangered by a handful of fringe elements, who are playing into terrorists hands? As such hardly any of the Indian universities make it to the institutes of excellence in the world. With incidents like these, the image is bound to go down further.

Also, it is the taxpayers’ money that is being spent on the students who are studying in these universities. While a large number of institutions suffer from paucity of funds, JNU, DU and some select central universities hog a bulk of the HRD university allocations. It is high time the government took a call on whether it should continue to pay for the research students and professors who engage in break-India activities and use campuses as base for their divisive agenda. Foil attempt to make campuses incubators for subversion and treason.

(The author is a senior journalist and political analyst. Views are personal. He can be contacted at Balashankar12@gmail.com; Twitter@drbalashankar)