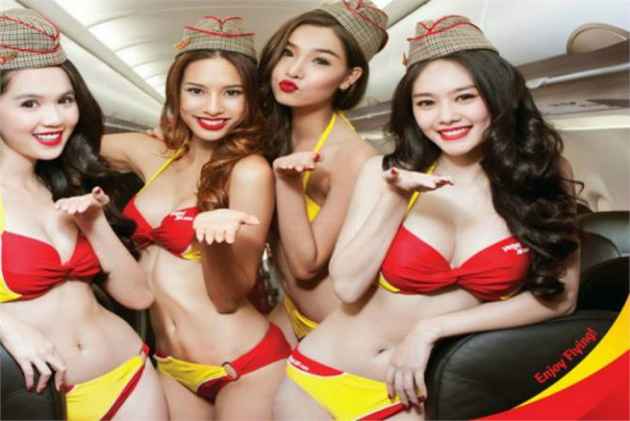 Vietnam-based low-cost airline Vietjet Air will soon commence direct flight service between Ho Chi Minh city and New Delhi four days a week to cater to the fast-growing air traffic between the two cities.
Run by woman entrepreneur Nguyen Thi Phuong Thao, the airline is popularly known as "bikini airline".
Vietjet Air has been in the news for its the racy “sexist” marketing stunts that. The airline has been publishing an annual calendar featuring bikini-clad models dressed as flight attendants, pilots and ground staff. Launched in December 2011, the budget airline saw an exceptional growth in its first years since taking to the sky.
BBC reported that in the past, the airline has made occasional headlines with having its stewardesses serving the aisles wearing little more than a bikini as uniform.
The airline found themselves in hot water in 2012 when five female bikini-clad flight attendants took part in a mid-flight dance posing as beauty pageant contestants. The airline had not obtained permission from Vietnam's aviation authorities, and it was fined £678.20 (around Rs 62,000), reported The Sun.
The company declined to divulge the commencement date of the flight, however, a company official said that services will be started "very soon", reported news agency IANS.
At present, there are no direct flights between the two countries.
The announcement was made at the India-Vietnam Business Forum organised in New Delhi recently to mark the visit of Vietnam President Tran Dai Quang.
Currently, the airline has a fleet of 55 aircraft and operates 385 flights daily on its 82 routes spanning Vietnam and across to international destinations.
According to a report, the official announcement says “direct flights”, though all other communication implies these will be non-stop flights. The two terms are used interchangeably, but they don’t mean the same thing. A direct flight can include stop-overs at one or more airports — it simply means you don’t have to change flights along the way. A non-stop flight, on the other hand, is just that—non-stop.