The DMK front may form the government, but the real winner of the Tamil Nadu election appears to be Vijaykanth, an actor known as the poor man's Rajnikanth. Updates 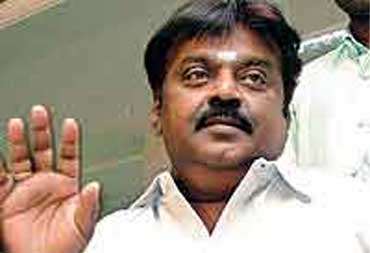 The winner of the Tamil Nadu election appears to be Vijaykanth, an actor known as the poor man's Rajnikanth (now figure that out!). With one seat for Vijaykanth from Vridhachalam, the success does not manifest itself in 'party position' tables. However, with 8.3 percent of the popular vote, with no one for an ally, his party has proved to be a spoiler in more than a hundred constituencies. He is threatening to emerge as the only pan-Tamil Nadu force next to DMK and the AIADMK. Travelling across Tamil Nadu in April 2006, I ran into several people who said they would vote for Vijaykanth's party. Asked to give the full name of his party, they fumbled. 'Desiya DMK' said one person in Thirumangalam who was in favour of the party. Quizzed further, "What does it matter, Vijaykanth's candidate will poll 20,000 votes here," he said emphatically. The figure became an Election Commission of India statistic on May 11, with Desiya Murpoku Dravidar Kazhagam's T. Thanapandian polling 19,970 votes in Thirumangalam, coming third.

Vijaykanth was not imaginative in christening his party. The trend with new Tamil parties in the last 15 years has been to eschew the Dravida/ Dravidar tag in their nomenclature—be it Puthiya Tamizhagam, Pattali Makkal Katchi or Viduthalai Chiuththaigal (literally Liberation Pathers, known however as Dalit Panthers of India, DPI). Vaiko's MDMK (Marumalarchi Dravida Munnetra Kazahagam) was an exception, but the party hardly took flight on its own wings. DMDK, launched on September 14, 2005, was initially keen to hitch a ride with either of the two Dravidian heavyweights. Panrutti Ramachandran, a former AIADMK minister, was the Chanakya of the party. (He however lost in Panrutti.) Vijaykanth even called on DMK chief M. Karunanidhi after launching his outfit. 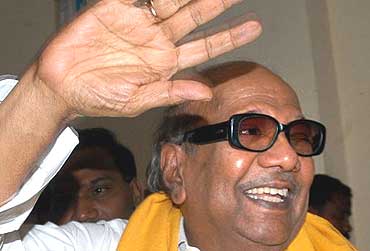 The six-party DMK-led Democratic Progressive Alliance, despite Vaiko's exit, hardly had place for Vijaykanth. Vijaykanth's wife Premalatha then began negotiating with Sasikala Natarajan, AIDMK chief J. Jayalalitha's confidante, in earnest. Their demand for 40-plus seats was not entertained, what with 35 already allotted to Vaiko. Vijaykanth, finally forced to go it alone, seems to have won a place in the general voters' hearts for the simple reason that he stood up to the might of the two Dravidian parties.

On April 17, K. Palanivel, a government employee sipping tea and savoring the evening newspapers in Thenkasi, said: "The Congress claims to be a national party and keeps talking about ushering back Kamraj rule. But it does not have the gall to contest all the 234 seats. Vijaykanth is doing that and we respect him." A perception that seems to have resulted in the DMDK securing between 10,000 to 35,000 votes in each constituency in the western districts—Coimbatore, Nilgris, Salem and Erode—thus managing the third position in all the 28 constituencies in this region. 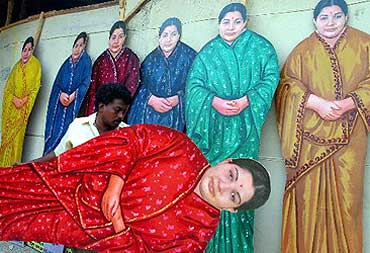 The vote for Vijaykanth has to be understood as an abstract protest vote and not an approval of what Vijaykanth stands for as such. On several occasions during the campaign he was in an inebriated state, chewing gum to suppress the breath. Campaigning in Cuddalore, he once assaulted a candidate in full public view because he had apparently used too many vehicles in the convoy causing an accident. On another occasion he ended his speech by suggesting that people vote for the AIADMK; correcting himself after being prompted. Though he has a strong Naicker fellow-feeling, his image as a filmy hero has enables him to connects across castes. He has with 35,000 fan clubs with 23 lakh card-holding fans. Several of these fan clubs are in Dalit colonies.

However, that did not stop incidents like these from happening. On May 2, some DMDK workers damaged party flags and banners after Vijaykanth refused to visit a Dalit colony near Erumanur, Cuddalore district, and address voters there. Vijaykant was on his way to Reddikuppam village in Vridhachalam constituency. A heated argument followed and the workers damaged party flags and removed banners from the colony. Similarly, on polling day, Vijaykanth was denied entry into a Vanniyar-dominated area of Vridhachalam. There's an unverified claim that more than 100 of the candidates he had chosen belong to Naicker/Naidu community. It needs to be said the actor did field a sizable number of Christians, Muslims and women as well. However, the votes polled by DMDK are hardly a reflection on the local candidates. They represent an abstract vote for change.

Vijaykanth's calculation is to wait for a post-Karunanidhi scenario. Opinion polls have indicated that Karunanidhi's son Stalin has hardly 1% popularity as chief ministerial candidate; whereas Vijaykanth stands next to Karunanidhi and Jayalalitha. As chief minister as the age of 83, it is only a matter of time before Karunanidhi looks for his successor, most likely in Stalin. In a coalition government with the Congress extracting its pound of flesh, Karunanidhi will not find it easy to anoint Stalin, what with the Marans grumbling about it. Karunanidhi, who has postponed a colon surgery, will have to pull on despite poor health. He represents the other end of the Budhia syndrome. If it's objectionable that a four-year-old should run long distances, it remains to be seen how long an 83-year-old man who can hardly walk without support will be allowed to run.

Results At A Glance