And proud of it. Multi-ethnic but no melting pot, New Delhi is home to every kind of Indian. The three of our tribes... 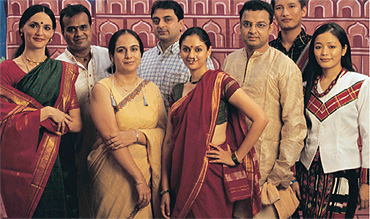 outlookindia.com
-0001-11-30T00:00:00+0553
While New Delhi may seem to be primarily the capital of Punjab and then of India, a closer inspection reveals this to be, for the most part, untrue. Historically Delhi has always been a stew, open to anyone with an army, a caravan, or a singing voice. It is a fact, post-Independence, that there is more balle balle per square foot here than anything else, but, increasingly, people from other communities are flocking here. It is the seat of government and a burgeoning centre of industry, a thriving academic hub and the nucleus of a growing youth culture that provides education, employment, and entertainment. Young people from all over the country have always come to Delhi to study; now, with all that is available to them here, they’re coming to stay.

People are flooding into this city, and they’re not all Bangladeshi slum-dwellers. What makes this influx interesting is that they’ve retained their cultural markers while assimilating Delhi’s own. Their languages, their cuisines, their festivals; they all tug Delhi in different directions, turning a creamy homogenous maa ki daal into a much more heterogenous stew. More to the point, Delhi isn’t complaining. What could be more cosmopolitan than that?

We can’t give you a listing of all the tribes, of course, and where they hang out, or even how to recognise them. But we’ve taken a few at random, and where to observe them in their natural habitat. The thing is to bring your open mind, in some cases your appetite, and a sense of curiosity. You’ll be surprised at what you find.

A Large Tribe: The Bengalis

The Bengalis form one of the largest non-Punjabi groups of the city. There is even a Bengali Club in the Old City, which points to the fact that there were Bengalis in Delhi before Independence, holding down jobs as lawyers, doctors, clerks and higher level officers in the central bureaucracy. Independence, or rather Partition, sparked the biggest wave of Bengali migration to New Delhi. Chittaranjan Park started life as East Pakistan Displaced Peoples’ Colony, or EPDP colony for short. The area was zoned for plots that were apportioned to refugee-migrants. What that means is that the core of C.R. Park was, and remains, East Bengali. The fact that C.R. Park still continues to be such a hotbed of Bengali influence points to two things: one, that the Bengalis love their roots and lay them deep, wherever they are, and two, if you’re looking for Bengali culture or, more prosaically, Bengali sweets, this is a good place to start. A great many of the ‘dyed in the wool’ Bongs one meets are actually born and brought up in Delhi. This in itself points to two further things: the resilience of Bengali culture, and the fact that Delhi’s soil isn’t quite as inhospitable to other influence as it is generally thought to be.

As any Bengali will tell you, the community loves to eat, talk, organise, fight and pray—soccer in Calcutta of course covers all these options—and they also love to culture it up. There are over 600 Durga Pujas every year in the NCR, and each one with feasting, prayer, and all the cultural paraphernalia the Bengalis love to surround themselves with. That means dance, music, theatre of all sorts, and pandals that range the entire aesthetic and political spectrum. Most of this is open to the public.

Markets 1 and 2 in C.R. Park are great places to saunter around at any time. While you wander and eat daal-puris and dhakai parathas and puchkas and the gobhi-filled shingharas, or shop for hilsa or mutton chops or tele bhaja, you’ll be listening to the sounds of Bengalis all around you, animatedly discussing the issues of the day. The Babu Moshai restaurant (K-1/52, Chittaranjan Park, 26275220, 26274327) is fully good enough for the average non-Bengali to get a taste for the cuisine. Annapurna Sweets (the one at Community Centre, Yusuf Sarai, not the pale imitations in C.R. Park) is a good place to get mishti as is the venerable Annapurna Mishtan Bhandar in Chandni Chowk (near Shish Ganj Gurudwara, 23962050, 23862109; branch at P 37-38, Pandav Nagar, Mayur Vihar I, 22759945). Aficionados swear by the kancha golla at the Chandni Chowk shop, which has been running since 1929.

The other time to see Bengalis revving it up is on and around the 8th of May, the birth anniversary of the uber-Bong, Rabindranath Tagore. Then the fervour knows no bounds. There are workshops and seminars and recitals of Rabindra Sangeet by school troupes and by more accomplished groups. Uttarayan, a large membership-based organisation—and also the name of the old boy’s home in Santiniketan—organises a real jamboree of Bengali culture around that time, including an evening of Rabindra Sangeet at Kamani Auditorium. The level of musicianship is very high indeed, and the enthusiasm of the many groups involved infectious. Call Uttarayan for details (Sanjoy Sarkar, secretary, 26167159; Ashis Mukherjee, president, 26537355). The Bengal Association on 3 Hailey Road is a good resource (23327431); their monthly newsletter is a mine of info. If you can, speak to Badal Roy or Amaresh Ganguli.

And A Small One: The Mizos

At the other end of the spectrum are the Mizos. Though a well-organised and well-knit community, its small size makes it hard to get a handle on. As with other Northeastern communities, the Mizos came to Delhi for two things: the government and education. Employment in the Northeast is sparse. Now, with the burgeoning of the service industry and IT spinoffs like the BPOs, more and more kids are staying on after they get their educations. This has come as a boon for many Mizos who miss home but know that job prospects back home are extremely limited.

The cohesive nature of the Mizos lends itself to close organisation. In Delhi they were organised first by the Mizo Student’s Union. The Mizo Christian Fellowship and the Welfare Association followed. Any self-avowed Mizo can join, for a small membership fee. They meet every Sunday at 4pm for a Mizo service at the Free Church in Green Park. The service is non-denominational, and it also serves as a convenient place for everyone to hear about births and deaths and other community stuff. Parties are arranged, get-togethers planned; the nitty-gritty of living in a place far from home, for example the transport of mortal remains back to Mizoram, is arranged and paid for.

Their roots are strong, as is their faith, and they affirm these whenever they meet. However, unlike the Bengalis, the Mizo community is hard to get a feel for, if you’re not a part of them. This is not due to any intransigence on their part. Some of it is due to pure ignorance on the part of Dilliwallahs; Mizos are sick of being thought of as Nagas, or Nepalis, or even Thai.
Their food is hard to come by and no, a momo at their Dilli Haat stall does not qualify as Mizo food. Tracking Mizo food down in Delhi, if you’re not friends with a Mizo, is practically impossible.

But don’t despair. At the time of the Kut, their harvest festival, which they try and arrange around the time of the Dussehra break, they try and get everyone under one roof or one lawn and then they have the works. Recitations and debates for the children and young adults, costumes and quizzes and games and sports and food; music and theatre and, if affordable, a live band or two in the evening, where the formidable musicianship of the Mizos can be viewed. Music is a way of life for them, and many of them already play in bands around the country. All this is arranged purely on the back of the membership fees people pay, and space is at a premium, but if you can wangle an invitation, go take a look.

And One In The Moddle: The Telugu

Though not as well-known as the Tamil community and not as well networked as the Malayalis, Delhi’s Telugu population has not lagged too far behind. The Delhi Telugu Sangham estimates that there are half a million Telugu people here, and they all take being Telugu seriously. In fact, so focused are they on their own culture, high, pop, and otherwise, that when Chiranjeevi’s movie Tagore was released here, the fans got out their musical instruments and cheered outside the theatres.

The Telugu influx started before Independence, mostly in the Central government services. G. Sai Krishna Rao, the general secretary of the Telugu Sangham, estimates that half of the 500,000 Telugus in Delhi may actually have been born and brought up right here.

That doesn’t gloss over their roots, though. The culture is an old one, and it constantly reinforces itself. The first settlements were in West Delhi, in Karol Bagh and Patel Nagar. These would have been in central government housing schemes; as these were bought into by outsiders, their occupants moved, to Janakpuri and R.K. Puram, to Noida and most recently, to Dwarka. What remains constant is that the Telugus stick close to each other.

Cultural troupes are brought up from AP. These are open by invitation to non-Andhra people as well and tickets are advertised. A popular community activity is the Karthika Masam—the end of Karthik—when the practise of the Vana Bhojanam, literally eating out under the trees, leads to giant open-air picnics. Cooks are brought in from AP, and entire families take Talkatora Garden, Lodi Garden or other green spaces over for the annual cookout.

But the Telugu people don’t only eat under trees; if you’re after good Andhra food, look no farther than Andhra Pradesh Bhavan (1, Ashoka Road, 23382031). The meals here are quick, clean, affordable, and very good indeed, and you can get non-veg food as well. If you’re a vegetarian, Balaji Hotel on Gurudwara Road and Southern Hotel on Arya Samaj Road, both in Karol Bagh, are good choices for authentic Andhra food. Southern Super Bazaar on Arya Samaj Road stocks essential ingredients, including seasonal vegetables, and makes for an engaging wander. There are branches in Janakpuri and Gurgaon. Rama Stores Munirka is another South Indian landmark, though that one is much more pan-South Indian, with a little bit of everything.

The Andhra Education Society runs six schools in Delhi, though you don’t have to be Telugu (or Telengana) to be admitted. Sri Venkateswara College is similarly set up. The Delhi Andhra Association on Lodi Road serves as another fulcrum for the community.

Being a religious bunch, temples naturally play their role in the community, though, interestingly, they worship at the other South Indian temples in Delhi, and don’t have one exclusively associated with them. Malai Mandir and the Ayyappa Mandir in R.K. Puram, Vinayak Temple in Sarojini Nagar, etc; the Telugu contingent worship at them all.

So there it is. Three tribes of Delhi, one huge, one tiny, one in between. The fact that they are far from home hasn’t stopped them from making themselves at home. The Punjabis don’t seem to mind; they like the food, at any rate, and discovery can always start with that. Take a look at your city, or even around your place or work or study. There’s more to it than meets the eye.

With inputs from Muneeza Naqvi and Pallavi Srivastava