By bringing China, India, Brazil and Saudi Arabia together with the leaders of the developed world to discuss the economic crisis, the summit provided a vivid manifestation of how globalised the world has become. 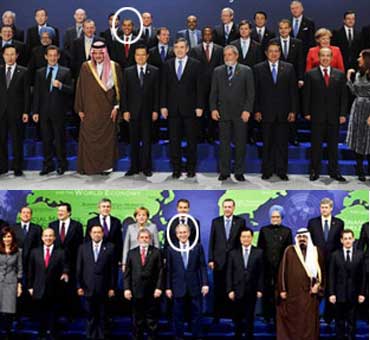 The prime achievement of this month’s G-20 summit, in long-term, historical terms, may turn out to be that it took place at all and ended with sufficient harmony for a second meeting to be planned. That is not to damn the proceedings in London with faint praise. By bringing China, India, Brazil and Saudi Arabia together with the leaders of the developed world to discuss the economic crisis, the summit provided a vivid manifestation of how globalised the world has become. The G7 and G8 may continue to meet, but a wider forum has been created which reflects the way in which the world has altered.

That said, the world is not so much in need of long-term historical significance as for more immediate measures to cope with a recession which grows more threatening by the day. On this count, the London summit fell decidedly short. Though the line-up for the final photograph – with President Barack Obama moving to the back row - may have illustrated the widening of the decision-making process, the proceedings showed all too clearly how national and regional divisions stand in the way of effective global action.


Despite some pre-summit grandstanding by President Nicolas Sarkozy of France threatening to leave if he did not get his way, there was never a serious threat of a breakdown; the meeting was too important for that. Nonetheless, a more serious and fundamental flaw was evident which will have to be overcome if real progress is to be made at future G-20 meetings. The summit showed little readiness on anybody’s part to budge from prior positions and little sign of a readiness to compromise or to get to grips with basic issues. If that does not change, the G-20 will be able to play only a marginal role as individual member countries, and blocks such as the European Union, pursue their own paths.

The fundamentally destabilizing structural divide between the surplus exporting nations and the deficit importing countries was not addressed. While economic stringency may be obliging Americans to spend less, the shifting away from the Clinton and Bush era economic model is still a distant prospect as the US stimulus program aims to boost incomes and, thereby, consumption. For their part, Germany, China and Japan see their road to recovery as lying through the old model - a revival in exports. Chancellor Angela Merkel says her country does not want to alter its reliance on exports while China has been rolling out tax relief for export industries under strain, from steel to textiles. Between them the three biggest exporting nations run an annual surplus of $835 billion which has to be matched by spending by the deficit nations.


The $1 trillion pledged to the IMF, the World Bank and other international bodies was welcome, but well short of what is needed and remains a general commitment with no fulfilment date attached. President Obama may have wowed public opinion on his visits to London, Strasbourg, and Prague, but Europe’s leaders (with the exception of the fence-sitting British) were not swayed when it came to joining the United States and China in stepping up stimulus measures. For the Europeans, who point to their welfare states as protecting their citizens from the downturn, tighter regulation and a drive against tax havens was more important than pumping in more money and aggravating budget deficits – despite arguments that getting out of the present hole is more important than constructing machinery to prevent similar outcome in the future.

As Prime Minister Gordon Brown and others insisted, the summit was only an initial encounter. Much more work and many meetings will be needed to work out solutions to the crisis. The urgency of the fast deteriorating situation, though, leaves no time for such exercise.


Away from the cheering European crowds, President Obama faces massive challenges as US unemployment hits a 25-year high and Congress estimates this year’s federal deficit at $1.8 trillion. The OECD predicts a 4.3 per cent contraction in advanced economies this year followed by stagnation in 2010. Growth in the Eurozone is forecast to drop by 2 per cent this year. Eastern Europe is in maximum danger. Exports from China, India and South Korea fell by more than 20 per cent in February over 2008. Nobody knows how many toxic assets remain hidden, but Western banks are in no condition (or state of mind) to fuel expansion – a study by Morgan Stanley puts the balance sheet shrinkage at 15 leading banks at $3.6 trillion with another $2 trillion to come.

There was, of course, a commitment to free trade in London – anything else would have been unthinkable. But, with its report that 17 of the 20 countries represented had enacted protectionist measures, the World Bank showed just how fallible such promises can be.. From the ‘Buy American’ program to President Sarkozy’s talk of repatriating car manufacturing by French companies from Eastern Europe, politicians all too easily pander to real or imagined political pressures. Mr. Brown’s spin doctors may have come up with a reassuring gloss on his earlier promise to ‘create British jobs for British workers’ but the visceral appeal to nationalism was unmistakable.

What makes the current crisis all the more challenging is that it is taking place at a time amid a shift in the balance of the world economy. If big emerging economies, notably China and India, have been hard hit by their exposure to the contraction of global demand, the London summit was fresh confirmation of globalisation’s momentum since China joined the World Trade Organization in 2001. The problem is that nobody has a clear vision of how the two parts of the global economy – the West plus Japan, on the one hand, and the BRIC nations (Brazil, Russia, India and China) on the other – can better fit together in more than a simple trading relationship.

This quandary, addressed only by implication in London, concerns China most of all. The last seven years not only propelled the People’s Republic into the position of the third largest global economy but also turned it from a country which, following the advice of the patriarch Deng Xiaoping, grew richer but kept quiet into a power that is ready to make its voice heard. So, before the summit, Beijing’s leadership lambasted the Western financial system, talked about Special Drawing Rights (SDRs) held by the IMF as an alternative to the dollar and admonished Washington to set its house in better order.

However, for all its expressions of concerns about its dollar holdings, there may be little China can do to lessen its symbiotic relationship with the US, at least in the short term. Still, it has gained a voice which will not be muffled and is likely to be followed by other big emerging economies represented at the summit. A page has been turned which recognizes the scale and scope of globalisation. Now, the urgent task is to put more substance into the new world forum before the strength of the recession and the play of national interests block the emergence of a new mechanism that can respond to the global challenge.

Jonathan Fenby’s latest book, the Penguin History of Modern China: The Fall and Rise of a Great Power, 1850-2009, has just appeared in paperback. Rights: © 2009 Yale Center for the Study of Globalization YaleGlobal Online

How Real Is Rural Prosperity?