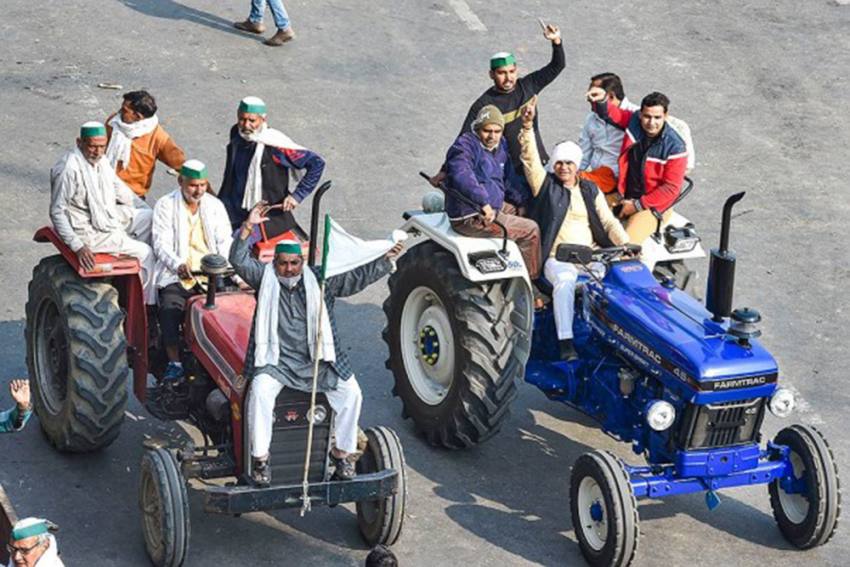 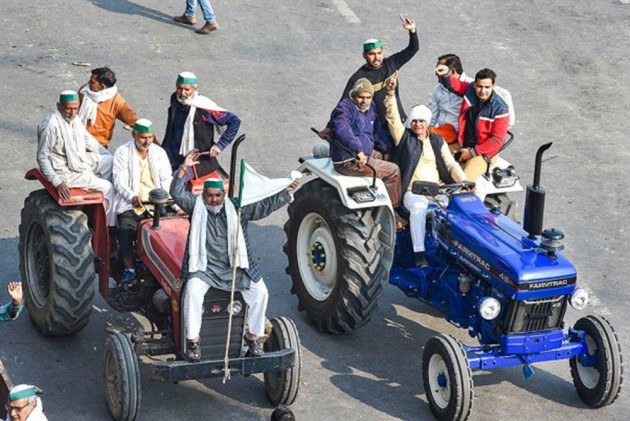 Tractor-trolleys and other key farm equipment have been turned into temporary shelters for thousands of farmers who have assembled at the Delhi border to protest the Centre's new farm laws. The farmers’ protests entered the fifth day on Monday, with the protesters threatening to block all five entry points to Delhi.

As temperatures dipped in the national capital, the farmers demanding that the laws be repealed are spending the nights inside their tractor-trolleys covered with tarpaulin. Most of the farmers brought at least two trolleys with each tractor with one trolley carrying ration and other essentials and the other being used to accommodate the protesters. Farmers have also cushioned their trolleys with layers of straw and laid mattresses over it to protect themselves from the cold. The tractor-trolleys have been stationed on a 10-km-long stretch in an area in Haryana bordering Delhi.

Flags of various farmers' outfits from Punjab and Haryana can be seen fluttering atop the tractors, some of which are fitted with loudspeakers and are being used by the leaders of peasants' bodies to address the gatherings. The protesting farmers say they will force the Centre to repeal the “anti-farmer” laws.

“If these laws are implemented, farmers will be destroyed,” said Trilok Singh, a farmer hailing from Amritsar. Protesting farmers have said that they have come prepared for a long stir and have stocked themselves with ration, clothes, cooking gas cylinders, quilts and other essentials.

“We will rest only when these laws are scrapped. In Punjab, we peacefully sat in protest for two months, but our plight did not move the Centre, now they will have to listen to us because our livelihoods are at stake,” said another farmer Lakhwinder Singh hailing from Moga district.

When asked about the Centre’s claims that these laws will benefit the farmers, Lakhwinder Singh said, “The one who is going to eventually benefit are the big corporates, we don't see much gain for farmers.”

Meanwhile another farmer Kuldeep Singh asked, “When the Centre first brought the ordinance before the laws were passed, did they consult farmers at any stage. When farmers don't want these reforms, why are these being thrust upon us?” The farmers said that they would not return to their homes, till their demand for scrapping of three farm laws was accepted.

Meanwhile, the farmers on the occasion of the birth anniversary of Guru Nanak Dev on Monday, the founder of Sikhism, performed 'Ardas' (prayer) at the Haryana-Delhi border and distributed 'karah parshad' among protesters.

The All India Kisan Sangharsh Coordination Committee, Rashtriya Kisan Mahasangh and various factions of Bharatiya Kisan Union had given a call for the “Delhi Chalo” protest to press the central government to scrap the three new farm laws.

Farmers protesting the Centre's three farm laws have expressed apprehension that the laws would pave a way for the dismantling of the minimum support price system, leaving them at the "mercy" of big corporates.