An Indian, living in New Delhi and brought up on an ever-increasing diet of cricket, warms up to that quintessential American sport: baseball 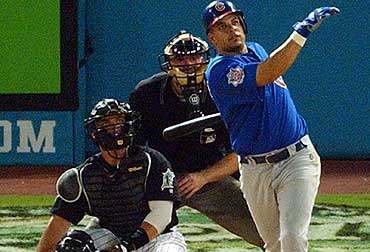 The past 10 days, I have been waking up bleary-eyed in the wee hours of the morning to watch grown-up men in smart ‘uniforms’, in another continent and time zone, throw, hit and catch a ball. And it’s not the Australia versus Zimbabwe cricketing mismatch Down Under. Rather, it’s baseball -- cricket’s distant cousin, thrice removed, if not more.

Come October, every year, the baseball season in the US hits the home stretch, with the Major League Baseball (MLB) playoffs. The season culminates with the finals, billed, rather grandiosely, as the World Series. It’s strange because all the 30 MLB ball clubs are rooted to US and Canadian cities, and about the only relevant international flavour is the presence of player imports -- that too less genuine and more home-grown, of the migrant type -- from Japan and Latin America.

The US might be, arguably, the best in the world in baseball, yet something’s not right when a country’s domestic league accords itself a global connotation simply because it boasts the best players and commands the biggest following. It’s another instance of just how inward-looking, yet extremely self-sufficient, American sport is. Anyway, as the Bard said, what’s in a name?

Behind such trivialities lies a game, just like so many others, tailored by the same fabric that gives sport a life, and turns it into an enthralling spectacle. Two teams, human beings with skills and emotions, engaged in a competitive game. It’s a plot line that holds appeal, in varying degrees, to sports aficionados the world over. Even if they don’t have team loyalties to cling to. Even to an Indian cricket buff, who, at first sight of baseball, couldn’t help but engage in comparisons between the two bat-ball sports, and dismiss baseball as a crude version of cricket.

In the beginning, it was jarring to note that baseball is, in large part, an all-or-nothing sport, with an overriding emphasis on ‘making a play’ -- a structure that doesn’t encourage creation or reward finesse (as cricket does so very faithfully). There’s an incredibly skewed work allocation, with the pitcher and the catcher sharing much of the load and calling most of the shots, while the others lounge around in the background for a good part of the game. And, unless you are a pitcher, there’s absolutely no worth placed on endurance, as the game demands brute strength and the occasional full-throttle burst of energy, not oxygen reservoirs.

But over the period of three years during which I’ve been watching baseball, sporadically at first and with some regularity now, I have come to realise that all comparisons between the two games are superfluous and academic. Baseball is baseball, cricket is cricket. Each has its own reasons, each has its own rhythms. Over time, baseball has grown on me, to the point of offering me my own comfortable space, within which I can experience the essence of this sport and feel part of a sporting contest.

Not being an American, or never having been to the US, or never having sat in a ball park on a pleasant summer evening and heard the crack of a bat, means I am likely to be dismissed by some as an outsider, incapable of appreciating baseball the way it is meant to be appreciated. Perhaps. I don’t relate to baseball the way, for instance, a Yankee fan would, with an acute sense of history, memories of buzzing New York nights spent at Yankee Stadium, local rivalries (with cross-town rivals, the Mets, or a little further away, with the Boston Red Sox), and a sense of belonging with his or her team.

The absence of team loyalties, soaring and sinking with their performance, means my involvement with baseball is, some would say, incomplete. Perhaps. Yet, I don’t feel slighted or short-changed by this position of neutrality or my outsider status, for there are other hooks in the sport of baseball I find myself seeking. And when finding them, latching on to them, and deriving a sense of pleasure and excitement that, for me, borders near complete.

There’s beauty in watching a good starting pitcher work his way through a game and strut his stuff -- fastballs, curveballs, breaking balls. An enduring memory is a snake-like Randy Johnson of the Arizona Diamondbacks firing in slithering, unplayable fastballs and curveballs to the Yankees in the 2001 World Series. There’s beauty in watching short-stops like Derek Jeter and Alex Gonzalez do darned good impersonations of Jonty Rhodes, marking out their territory, flinging themselves on the muddy diamond line and seemingly turning the art of double plays into a science. There’s beauty in the home run, in watching, say, Barry Bonds pound a travelling ball 400 feet into McCovey Cove in the San Francisco Bay. There’s beauty in watching a team defend a slender lead in the bottom of the ninth inning. Those are my hooks, and they make for an imminently watchable ballgame.

This year, in the playoffs, I have revelled in the spunkiness of the Florida Marlins: in Ivan Rodriguez, the very caricature of a working man’s player; in the slight, pants-in-socks Juan Pierre, who clears the infield at will; in Alex Gonzalez, gifted with loose limbs, hawk-like anticipation and a fluent arm. I have marvelled in the battling Cubs and their throttling pitching duo of Mark Prior and Kerry Woods. I have admired the character and depth of the Yankees, who are, in so many ways, similar to the current Australian cricket team. I have smiled for the fans of the ‘jinxed’ Cubs and the Red Sox, who, after an eternity, have a chance to go all the way.

However, much as all this invigorates me, it’s fine so long as it is the playoffs; it just doesn’t sustain my interest through the year. A lot of things Americans see endemic to baseball and find oddly charming simply escape a cricket-watching outsider like me. Take the baseball season, which Americans love for the way it plays out over the summer. If you ask me, it’s tedious and long, and wasted.

First, there’s a pre-season, which involves teams squaring off in friendlies, so as get into playing shape. Then, there’s a 162-game regular season, spread over six months, that decides which eight of the 30 teams progress to the playoffs, which is basically a euphemism for the quarter-finals. Then, there’s the post-season, quarter-finals onwards. Phew! It’s an overkill. The regular season is way too long (the contribution of each game to an outcome being 1/162), with far too many meaningless games (a bit like the previous zonal Ranji Trophy format), and simply doesn’t do justice to its ultimate purpose of narrowing down the title contenders.

The playoffs, though, are a different deal. The concept of a five-match or seven-match series, played home and away by turn, with the loser staying home for good, is compelling. It was why on the morning of October 8, the first day of the Indian international cricketing season, instead of watching Ganguly and Fleming babble inanities at the toss in Motera, I found myself engrossed in a pulsating Game 1 of the seven-match conference series (semi-finals) between the Cubs and Marlins. And will probably continue to do so through October.