Kerala’s world-famous Thrissur Pooram festivities ended today afternoon. Amid the joy, there was a tragedy as well. A cursory look at the 2018 edition of the extravaganza: 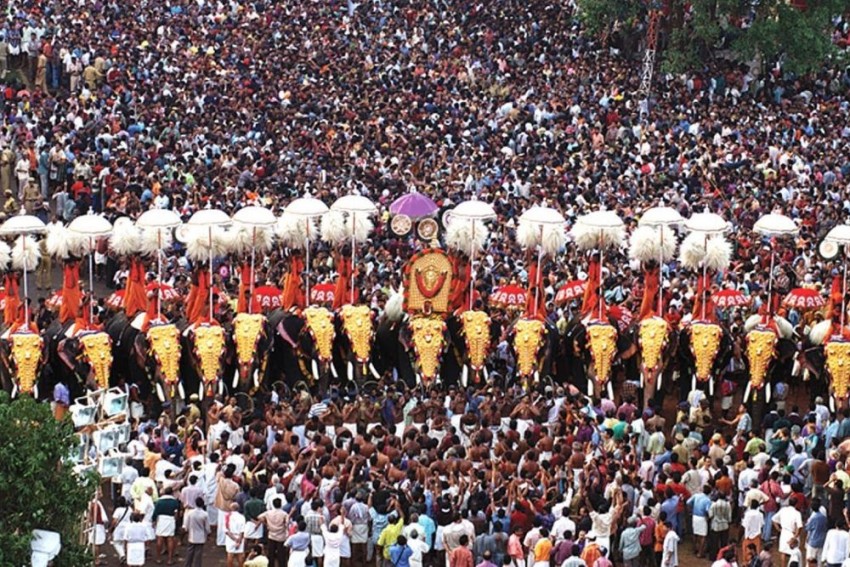 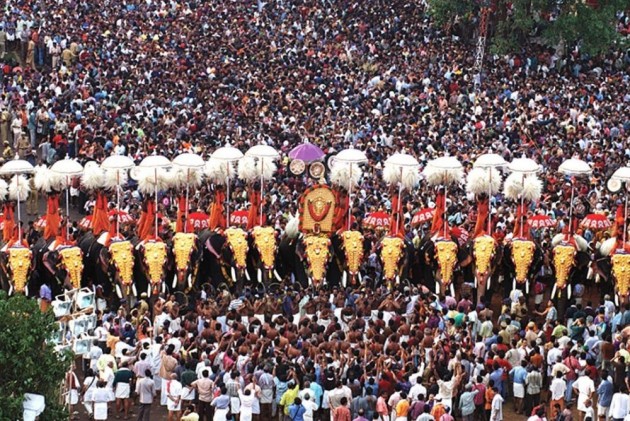 This time when the two caparisoned elephants came face to face in salutary gesture that highlights the farewell ceremony, some in the crowd at the Kerala town could have also thought of a percussionist who passed away amid the ensembles-centric festivities that typically span 36 hours. Else, just outside the imposing gateway of the vintage temple in Thrissur on Thursday afternoon, people cheered aloud as usual when the deities of the event’s two main goddesses were positioned close in direct opposition, atop a tusker each.

The locale was dotted by the leaves of banyan trees that lend some shade to the largely male buffs of what is God’s Own Country’s biggest traditional cultural extravaganza: Thrissur Pooram. The annual feature is a good 22 decades old, having debuted in 1797—as an act of sweet revenge by the local Sakthan Thampuran king who is said to have felt belittled by a allegedly rude act by the organisers of a pompous temple festival at Arattupuzha in the region.

Ever since, Thrissur Pooram has enjoyed a special status in the long list of conventional temple festivals that light up the linear strip of south-western India loosely called Kerala. It has been more so after the land’s official formation as a state in 1956. The degree of celebration has had its ups and downs like for any such event, though of late Thrissur Pooram has been increasingly becoming carnivalesque. This metamorphosis, over a quarter century, has been aided by general affluence, consumerist culture, Hindu revivalist tendencies, surging participation of youngsters and ubiquitous media presence, among others.

So, at 1 p.m. today (April 26) the two main competing temples at the Pooram met at the pathway of the western gopuram of Vadakkunnathan shrine, which the hub of the entire mela. The metal-moulded chief idols of Thiruvambady and Paramekkavu temples in the central-Kerala town symbolically gave a silent goodbye to each other, placed as they were on two pachyderms that rose to the poignant occasion and raised their trunks as if being respectful to each other.

Such is the craze for elephants in Kerala that the mammal has its legion of fans, who keep debating and discussing the beauty in the looks of each part of the gargantuan animal. After all, Hindu mythology has an elephant-headed god, Ganesha, which tends to make tusker a natural ally of the religion’s ecology. The tamed ones, predictably, have names: in fact, at the end-Pooram formalities today, it was Thiruvambady Chandrasekharan and Paramekkavu Rajendran that ceremoniously carried the Bhagavati idols and faced each other in the ritual known as ‘Upacharam cholli piriyal’.

Besides Thiruvambady and Paramekkavu, Thrissur Pooram typically sees the participation of eight other temples in a five-km radius around Vadakkunnathan temple (which, in itself, is nothing more than a host in the festivities). Each of these smaller shrines reach the venue to join the festivities with their defined ethnic ensembles played in the presence of a line-up of elephants to a timetable set by tradition. 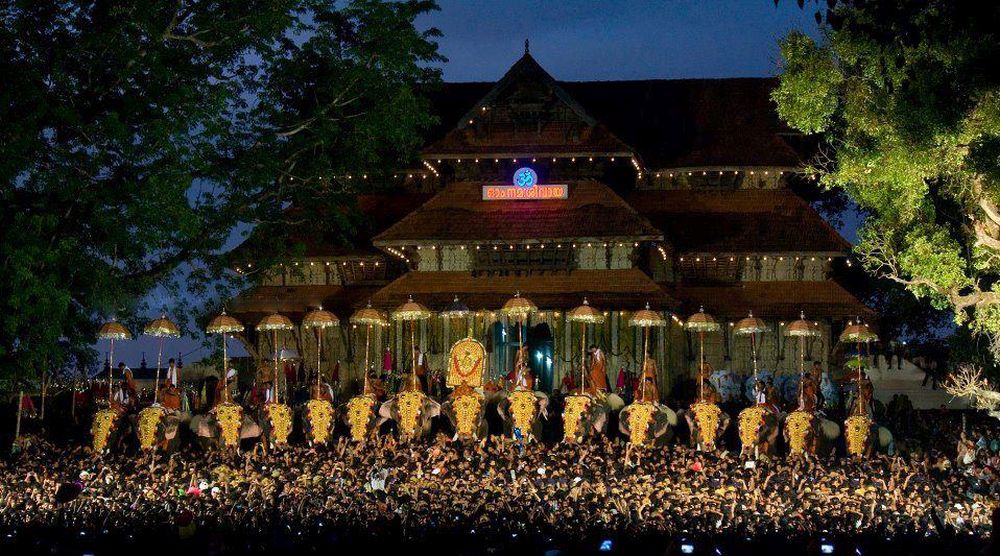 It is while performing in one such percussion concert that the 2018 Pooram met with a tragedy: maddalam drummer Kundalasseri Krishnankutty Nair, 62, died on Wednesday evening. The artiste, who was playing the weighty horizontal drum at the dusk-time panchavadyam for Kanimangalam Sastha temple, felt uneasiness while tapping his hands on the instrument and proceeding with his team towards Vadakkunnathan.

The percussionist, who lives in Kongad in Palakkad district neighbouring Thrissur, was rushed to hospital, where he was declared “brought dead”. The organisers of the Kanimangalam wing of the Pooram cut short their celebration by subsequently making a single-tusker march with minimal percussion support.

Panchavadyam, which is usually a two-hour symphony involving five categories of instruments (totalling some five dozen artistes), finds its centrality at a noon-time performance called ‘Madathil ninnulla varavu’ by the Thiruvambady segment. It starts barely an hour before Paramekkavu, with 15 caparisoned elephants in front of that temple on one bank of the arterial Swaraj Round, revs up with a chenda-centric percussion. Now, that is an introduction to a Pandi concert called Ilanjithara Melam once the 150-odd artistes stride into the precincts of Vadakkunnathan. At evening, the two sides face each other as a 15-elephant line-up to show off the rich variety of their multi-hued and many-shaped parasols in a highly-popular hour-long standing called Kudamaattam.

A near-repetition of the morning ensembles happens after sundown. Then, in the small hours, the open ground, Thekkinkadu Maithanam, around the Vadakkunnathan doubles as the venue for exhilarating fireworks. This time, though, Thursday pre-dawn saw them happen amid tight safety measures, leaving the spot sparsely populated by buffs.

As summer is already at its peak in Kerala, the tropical state will from now see a slide in such temple festivities. Then, in a month from now, the coastal land will—so to speak—welcome Indra, the god of rains. That will mark the onset of another monsoon.