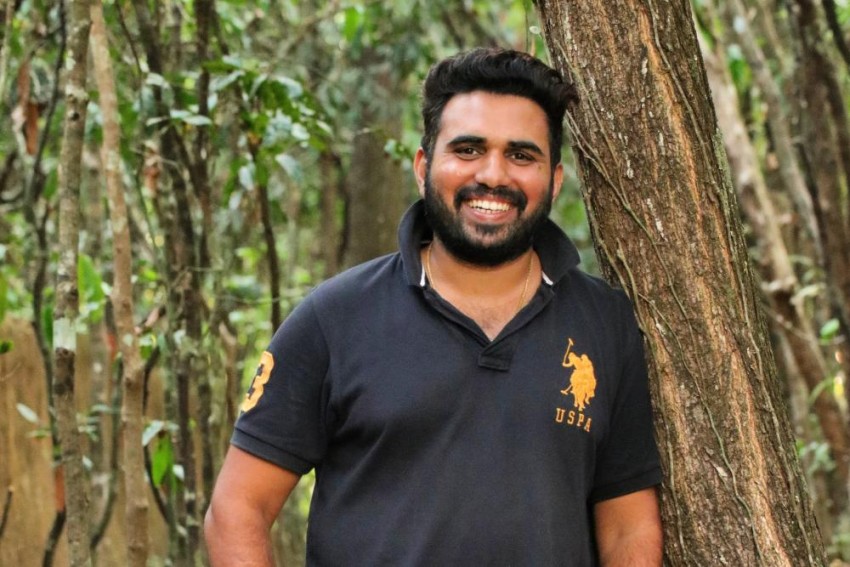 Harsha Raj Gatty May 23, 2018 00:00 IST This Man Quit His Lecturer Post To Set Up Karnataka’s First Private Butterfly Park At The Foothills Of Western Ghats

The foothills of Western Ghats in Belvai may look like a cluster or nothing more than a host of ordinary plants and trees, but a walk into the ‘Sammilan Shetty's Butterfly Park’ can change the visitor’s opinion. Down a trek through the quarter-km stretch of trees like coconut, mango and cashew besides curry-leaf plants, anyone delicately examine the top and bottom of their leaves will be in for a surprise. For, this spot is nature’s bed for butterfly-eggs, larvae and caterpillar besides dried shells among others.

Welcome to Belvai Village of Mangalore Taluk in Dakshina Kannadain Dakshina Kannada region of southern Karnataka. Here, back in 2004, a student called Sammilan Shetty found sudden interest in butterflies on his frequent visits to the area as part of a regular zoology assignment. The youngster went on to become a full-time lecturer, but in 2011 he quit the job and started this environmental venture that has become the southern state’s first private butterfly park.

“You don’t need an exotic plantation to host butterflies,” says Shetty, 32. “Regular saplings or even wild plants that you find in your home backyard would do for these beautiful insects to breed. Unfortunately, most people uproot them, terming them as unwanted weeds. Even my family was initially reluctant towards my going ahead with this passion for butterflies.”

Today, into the seventh year of its existence, the park has its visitors being familiarised with the names and behaviour pattern of certain butterflies. Prior to the walk, one will be introduced to the details through audio-video media. “The idea is to enable them to relate to the creatures and the ambience during their actual encounter with the species out there in the wild,” says Shetty. A 30-minute walk through the park gives a unique opportunity for the visitors to see the transformation of an egg to caterpillar-pupae and then the adult butterfly emerging out of it.

For the purpose of the identification of butterflies, Shetty uses a work authored by the 'Butterfly man of India'. Isaac Kehimkar's ‘The Book on Indian Butterflies' has been the inspiration for the park’s proprietor. It was Kehimkar, who opened the park for public view, in 2013.

Fourteen years ago, while pursuing his graduation studies for zoology, Sammilan documented 30 butterflies in the region for his project on the 'Study of local butterflies'. At present, the open-house conservatory features no less than 148 species of butterflies, including those from rare and indigenous species. This is close to 50 per cent (339) of the species that is found in Western Ghats.

Shetty is particular of keeping the park without closed dome or enclosures, which he says trap them. "We have developed the park by propagating natural greenery with ‘native host plants’ and nectar plants that attracts butterflies to these parks. We have only created a conducive condition for them and respect the butterfly's freedom to stay or to go," he says.

London-based World book of records has proposed to honour Shetty in recognition for his conservation of butterflies. Halpe Porus is the latest addition as the 148th butterfly at this park, which incidentally was spotted during course of this interview walk.

Altogether, India has 1,200 species of butterflies, of which approximately 320 in are in Karnataka. "Though the pollination by the butterflies is essential for food chain, no much study has happened in India over it,” says Shetty. “Although Indian Foundation for Butterflies is leading the way, it may take another 10 years for us to asses if we are truly accommodating the butterflies in our ecosystem."

While the massive urbanisation and real-estate ventures targeting the secondary-forests, Shetty says has led to the decline of wildlife including butterflies due to their habitat loss. While Maharashtra declared ‘Blue Mormon’ as its state butterfly in 2015 and Karnataka the ‘Southern Bird Wing’ two years later, butterfly enthusiasts are now batting to have recognition for a national butterfly. Butterfly conservators feel that the move would not only help in creation of awareness of butterfly in general, but also in conservation of their population.

The park, which is completely funded by Shetty’s family, has approximately 800 visitors during the season between June and December. “A lot of people have changed the way they look at butterfly, after the educational tour. In the process of documenting the butterflies, Shetty has also taken to photography of which he plans to turn into a documentary. The idea is to take the message of butterfly conservation and its contribution for crop cultivation (pollination) to as many people as possible in simple language,” he says.