Home  »  Website  »  National  » Interviews  »  ‘This Is A Fight Between Kamal Nath And The People Of MP’: Jyotiraditya Scindia 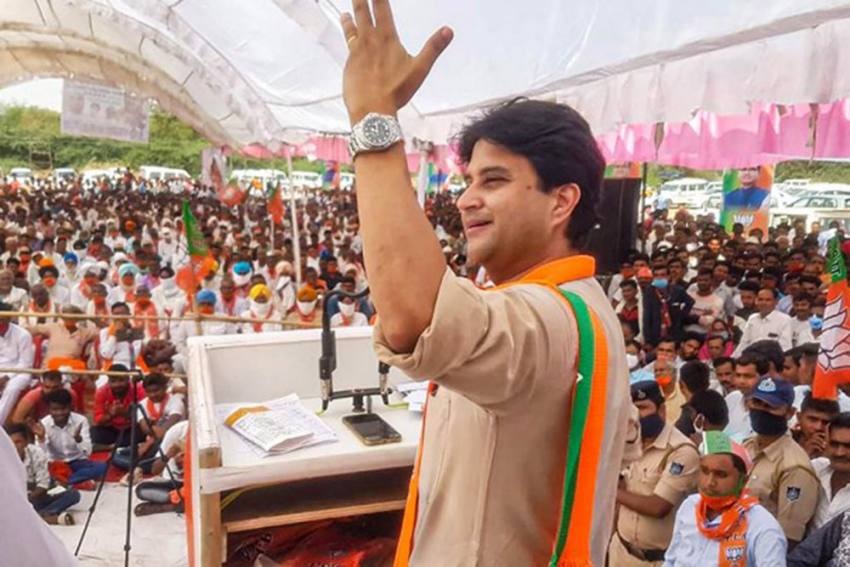 BJP leader Jyotiraditya Scindia addresses an election rally in support of party candidate Ranveer Jatav of Gohad constituency, in Barahed.
PTI
Preetha Nair 2020-10-28T18:34:57+05:30 ‘This Is A Fight Between Kamal Nath And The People Of MP’: Jyotiraditya Scindia 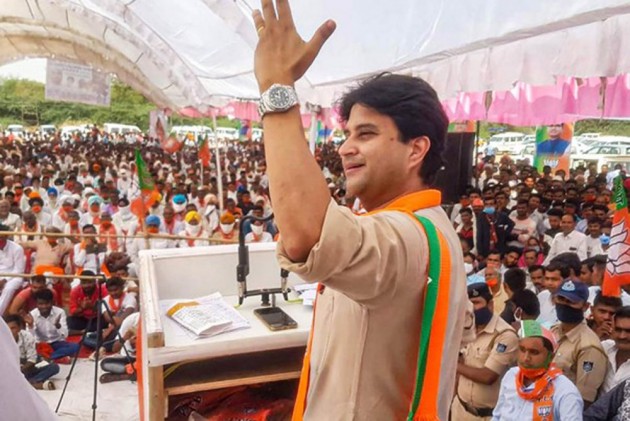 Ahead of the November 3 by-elections in Madhya Pradesh, Bharatiya Janata Party leader and Rajya Sabha MP Jyotiraditya Scindia talks to Outlook about his party’s prospects, campaigning against his friend and former colleague Sachin Pilot, and why he thinks the Congress and former Chief Minister Kamal Nath are on slippery ground. Excerpts:

Q) Rajasthan’s former deputy CM Sachin Pilot is currently campaigning for Congress in Madhya Pradesh. How does it feel to campaign against your friend and former colleague?

We are living in a democracy. Everyone has a right to put forward their point of view. Campaigning is a sacred part of the democratic process. Therefore, I welcome anyone to come and campaign in Madhya Pradesh. Ultimately, people will make their choice. Just because people belong to different parties, it doesn’t mean that you can forsake the democratic process.

Q) How crucial is this election for you, which comes after your exit from the Congress along with 22 MLAs leading to the fall of the Congress government?

It is important not only for me, Shivraj Singh Chouhan, or the BJP but for the people of Madhya Pradesh as well. The 15-month Kamal Nath regime was mired in corruption and his government trampled upon the aspirations of the people. The promises he made to the voters were cast aside and thrown into the dustbin of history.

Q) Out of the 28 seats, most of them fall in the Gwalior Chambal region, which is considered to be your stronghold. The Bahujan Samaj Party (BSP) is also a strong force in these seats. Will you be able to sweep the region like before?

Why 16 seats? Every seat is important. I am campaigning in all 28 seats. We are concentrating on our agenda. In the six months, we have been able to perform well against the 15 months corruption-riddled Kamal Nath government. It is shocking that a former cabinet minister of the Kamal Nath government apologized to the people of MP for not being able to stop illegal sand mining in the state. He is still a senior member of the Congress party. Another senior Congress leader wrote a letter to Sonia Gandhi regarding the corrupt regime led by Digvijaya Singh and Kamal Nath. He spoke about how illegal sand mining, liquor trade, and transfer industry flourished under the duo. They used to make money by facilitating the transfer of bureaucrats. These two Congress leaders are not aligned with me. They are independent.

Q) The Congress says that the BJP is buying their MLA s ahead of the elections. Recently, another Congress MLA switched to the BJP camp taking the number to 26.

After being in opposition for 15 years, the Congress government came into power under the leadership of Kamal Nath. Within a period of 16 months, he lost the confidence of his MLAs and 22 of them walked away because of the insults and barbs meted out to them. I don’t think any elected government in the country has such a history. The MLAs deserted the party because of the non-recognition of development projects in their region. They decided to go back to the people rather than stick to a government that is devoid of any commitment to the people. Out of these 22, six were cabinet ministers. This shows the inability of Kamal Nath as a chief minister, who failed to deliver the development agenda of his government. Now, 28 percent of Kamal Nath’s MLAs have left because of him. He should be ashamed of himself.

Q) Did this election turn into a fight between you and Kamal Nath?

Q) The Congress says that you are not on BJP’s star campaigner list and side-lined by your party.

I am shocked at Kamal Nath’s concerns for me. Let me reassure him and the Congress party that they don’t need to worry about me. Today, the BJP and I are one and we are working together.

The problem is that Kamal Nath’s view on life is dependent on his post and his chair. My view on life is not dependent on whether my name is on the star campaigner list or not. I am not bothered whether my poster is on the ‘rath’ or not. My mission is to find a place at the heart of the people of Madhya Pradesh. That’s the difference between Kamal Nath’s perception of politics and my idea of public service.

Q) The Congress election campaign mainly hinges on the ‘betrayal’ of the rebel MLAs, including you.

The two biggest traitors are Digvijaya Singh and Kamal Nath, who ran a corruption- ridden government for 15 months. They didn’t step out of the secretariat for 15 months. Now they have come out for votes after their chair has gone.

Q) BJP needs only 8 seats to secure the majority in the Assembly. Are you confident about the numbers?

I am confident that the BJP will win every single seat in Madhya Pradesh on the basis of our development agenda. I will not predict the numbers as it has become the pastime of the Congress party. Some Congressmen are saying 15, some 22 and so on. We have gone to the people with a charter of development and progress over the last six months. Now, we have a five-month-old government which not only battled the Covid-19 situation successfully but also put a full framework for the state in place. Kamal Nath was crying hoarse to his MLA s about lack of money. Now, where is the money coming from? Many historic steps have been taken by the Shivraj Singh Chouhan government. Under the central and state government scheme, a farmer will get Rs 10,000 in his bank account every year. This government has also added 37 lakh people to the ration list. We have also earmarked whopping funds for the development of constituencies. I am sure we will win the voter’s trust. We are servants of the people and let them decide. We will accept the verdict.

Kamal Nath used derogatory words against a female leader, who belonged to a scheduled caste. It is shocking that Kamal Nath did not remember his ex-cabinet colleague’s name and then called her an ‘item’. If this is the way he treats a cabinet colleague, how must he be treating his MLAs and Congress workers? I am confident that the people of MP will give a befitting response to his arrogance. Though Congress's former president asked Kamal Nath to apologize, he told him to go to hell.

Q) A BJP minister also made an offensive remark against a Congress MLA’s wife.

If indeed he had uttered such a word, it’s condemnable and objectionable. I have always called a spade a spade. I have never held double standards in my life.