They Play Cricket Too

Blind Cricket, unlike the normal version of the game, does not attract many spectators and therefore there is little media coverage, despite the World Cup win for the Indian team 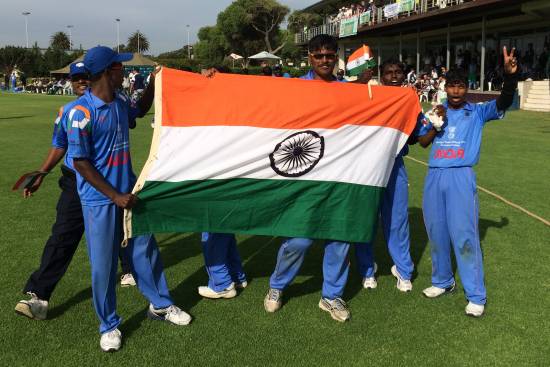 India won the 4th Blind Cricket World Cup held in Capetown, South Africa held from 27 November to 7 December 2014 at the Western Cape Cricket ground. The Team India—boys in blue—successfully chased down a stiff target of 389 runs by scoring 392 runs with two balls to spare and defeated the Pakistani team in a nail biting finish.

The Indian team comprising 17 players from 10 states in India was led by Captain Shekhar Naik. The youngest player, simply called Golu, from Jharkhand is 14 years old. It was a case of "Chak de India" where India lost to Pakistan in the initial game only to trounce them in the final. 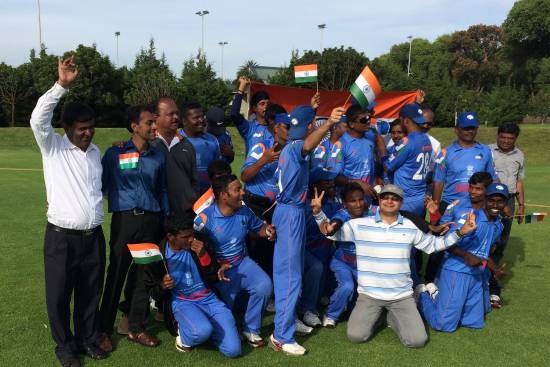 The batting duo of Prakash and Ajay broke down in unstoppbale tears of joy after hitting the winning runs in style. The team donning the blue Indian colour and holding aloft the Tricolour did a victory lap of the cricket ground to the applause of those present. A totally blind cricketer from Gujarat, called Ketan, was adjudged the Man of the Series.

However, Blind Cricket, unlike the normal version of the game, does not attract many spectators and therefore there is little media coverage. India won seven of the eight games they played with the other participating countries ie Sri Lanka, Bangladesh, South Africa, England and Australia, with very few spectators to watch the games. 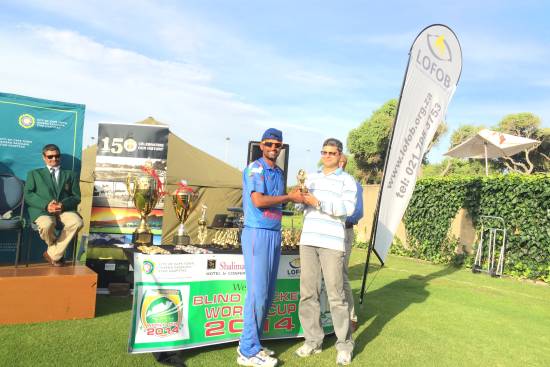 Man of the match

For those who do not know, the cricket for the blind is based on sound more than sight. The ball, made of hard plastic, is filled with metal ball bearings, much like a rattle. The bowlers bowl underarm to the batsmen by first asking them if they are ready and then warning them at the moment the ball is released. The batsmen judge and hit the ball; for singles, doubles, fours and sixes; get beaten, or get out—bowled, stumped, run out or caught. It really is a delight to watch the blind fielders snatch the ball out of air based only on sound to take a catch.

Players are categorised as B1(Totally blind), B2(partial visibility upto 3 metres) and B3 (partial visibility upto 6 metres). Each team has to play at least 4 players of B1 Category and each category wears a different coloured wrist band onto the field for easy recognition. Runs scored by B1 category player are doubled, so a four hit by a B1 Player gets 8 runs for the team. Batting order is in circles and has to have one player from each category in any order say B1B2B3 or B3B2B1 or B2B3B1 or B2B1B3 and at least 16 overs, out of 40, have to be bowled by players of B1 category. The rest of the rules are the same as in cricket. 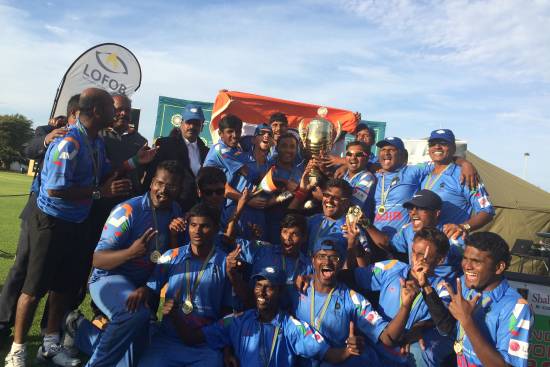 The Indian blind cricket is played under the aegis of the Cricket Association for the Blind (CABI) which is affiliated to the Para Olympic Association of India. BCCI has no contribution to make here, unlike the teams of other countries where blind cricket is a part of the national cricket board. Therefore, many stories emerged about the last minute sponsorships for the Indian team and the positive role played by the ministry of youth affairs and sports in supporting the cricket team to visit Capetown.

Many individual sponsors contributed to make the event happen. Hotel owners sponsored the stay of the players in Cape town, vehicle dealerships provided cars for use of organisers, The League of friends of the Blind (LOFOB), a Cape Town based organisation and the City of Capetown provided financial, physical, moral and infrastructural support to the tournament.

The Indian players, almost all of whom come from economically unprivileged families will return back to India and perhaps disappear into the crowd, only to re-emerge when the time for the next blind world cup comes around. Maybe they will again have to go through a series of struggles and battles so that they can go out and play again and raise the Indian tri-colour with pride.