There Is No Limit On Holding Gold : Somasundaram

There Is No Limit On Holding Gold : Somasundaram

More from Pragya Singh
View All

What would be the effect of the government’s recently proposed limits on gold holdings?

First of all there is no limit at all. You can hold any amount of gold. The government has only said that if it finds one tonne of gold with you, it will ask you how you got it. Up to 500 grams you can keep, no questions asked. The balance, say 99500 kilos, if you can prove you got from your father or grandfather, you can hold. This is no different from asking how you got cash of Rs 2.5 lakh. The government is not saying you can’t have cash over Rs 2.5 lakh. It is asking you to simply explain where it is from.

But we don’t know how much gold families have. How much gold they can own, doesn’t it become an arbitrary estimate?

You’re right. On an aggregate basis we know India’s gold demand over the last 28 years and based on this our conservative estimate is of 23,000 to 25,000 tonnes, not including gold held in jewellery shops as stock. That could be another 8,000 to 10,000 tonnes. But individually, yes, it’s impossible to tell how much gold is there. That is why there will not be any limit on how much gold Indians can hold. Because if you do put a limit then how do you enforce it? Also, a 1992 or 1993 circular said that married women can own 500 grams, unmarried women 250 grams, a man 100 grams, no questions asked.

So this rule on gold ownership exists since the 1990s?

It does. Let us consider the total gold—23,000 to 24,000 tonnes. For 157 crore people, it’s an average of 15 grams. Assuming only 100 crore Indians can afford gold, the average is 24 grams. Or only consider 24 crore Census households. That makes 100 grams the average. Does it still sound like a common man will be severly impacted by a 500 grams limit? 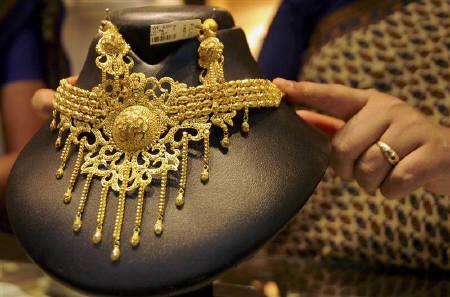 You mean just the middle class and wealthier will be?

It will not even affect the middle class. In a normal middle class wedding, say a government official’s, banker’s, manager’s, how much gold do you think is involved? (For them) 200 grams is a lot of gold. The problem is that we see the top news magazines, the Page 3 stuff, but that is a very minuscule population. The bulk of people, who conduct weddings in the kind of wedding halls we see all around, very few would have 850 grams gold. How many people have a kilo of gold?

That’s the question nobody can answer.

If this is the case then India has much more gold than anybody has ever estimated. I can only look the aggregate figures and come to a conclusion. Now, we all know that even a very poor rural woman will perhaps own a very thin gold bangle. This indicates wide distribution of gold. Even if India has 30,000 tonnes, it is not that big considering this. Don’t forget, 500 grams gold is worth Rs 15 lakh.

The rich, who hold much more gold?

They will be able to prove their ownership, because they would have got a bill, or succession certificates, or would have paid estate duties in 1984. There are many such people, like the erstwhile maharajahs, who would be able to prove their ownership. Also wealth tax was applicable on gold until 2012. So if you had already paid wealth tax or disclosed at the time, you can say you got your gold from your father or great grandfather who had paid estate duties in 1984. If you got your gold between 2000 and 2016 you can show debits against bank accounts. Also, the government has not said that come tomorrow morning (and prove your gold ownership). Even last year people earning above Rs 50 lakh were to disclose all assets including gold.

What if you had not disclosed it then?

You can always disclose now. But Rs 50 lakh—only some 40,000 people file tax returns above that. Many, anyway, don’t have taxable income.

What about the impact on gold buying of demonetization?

Deomentisation is a temporary disruption. The status quo has been upset (but) certainly, it will have big intangible benefits, including an increase the number of taxpayers etc. As far as gold is concerned, (government) should cap it with new regulations like nobody should sell non-Hallmarked jewellery, which means that every guy who sells jewlery must have a license. This is good because if you sell anything which is not Hallmarked it can be seized. 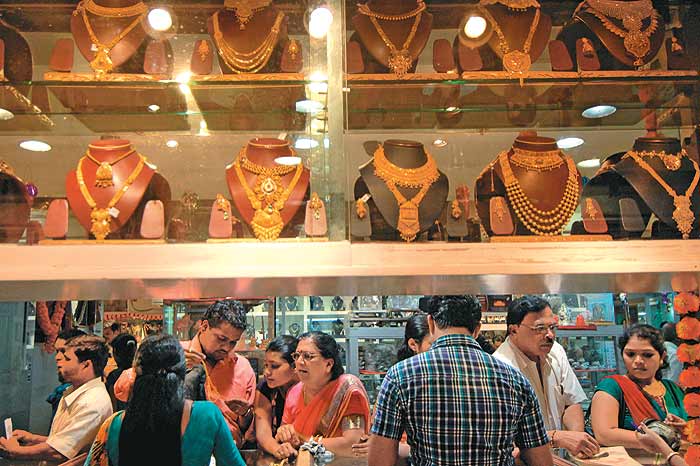 The customer doesn’t say he will not pay these charges but if you offer him a chance to buy with 1.5 per cent less value-added tax he would take it. It is traders who went on strike against the tax not customers. Gold prices rose 25 per cent last year but customers still bought 700 tonnes, didn’t they. Hallmarking is very inexpensive—hardly Rs 25. Also, customers don’t know whether the gold he is buying is smuggled or not. The smuggler takes all risks of passing security checks etc—do you really believe he will pass on the benefit to customers? Ultimately, the customer pays.

Today the biggest worry for many people, even those who bought gold with accounted-for income, is that they don’t have bills for it. This, because many bought gold without bills to save 1.5 per cent VAT. Customers might also find that their gold is not as pure as bargained for. What they save in tax, they forego in purity.

Many buyers will have lost their bills.

That is ultimately what everybody will say—I do not have the bill because we did not expect to need it.

Will gold market remain this turbulent for long?

We believe the effect will be not very high. More importantly it will bring more business into the organized trade which is very good for gold. This is the right time to bring gold into banking—more gold savings, more ETFs. To make it more attractive, it’s time to address the passion for gold while getting clear accounts of who is buying and to ensure that gold is held by institutional players who use it productively.

Is the 850 grams (family) limit fair? Even for gold-rich southern states?

Keeping gold is a community thing, so you do have some families who keep a lot of gold, the Chettiars and so on. However, it is not true that the south has more gold. In aggregate terms, in Tamil Nadu, Kerala, Andhra Pradesh, Karnataka, there is a lot of gold, so that is why about forty per cent of gold in India comes from the south. My estimate, however, is that the numbers of households with gold is much higher in all relatively better-off states, whether in the north or south.

Why do Indians value gold more than other assets?

That is because there’s a lot more uncertainty in India. Also we had traditional systems, such as lending against jewellery. These have now moved into the organized sector. In the 1970s you could take gold only to the pawn broker, now you can walk into a bank branch or a finance company. 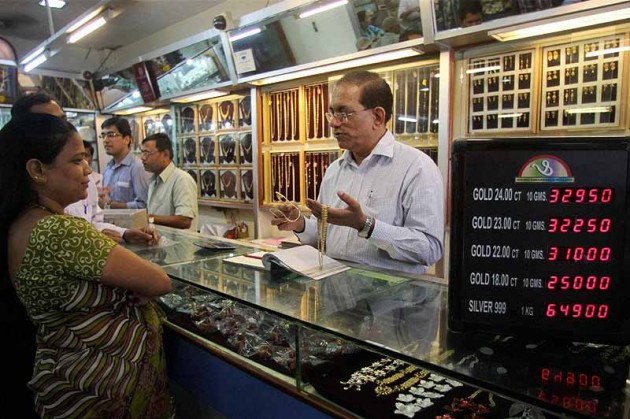 You mean to get loans against jewellery?

We think finance companies are the biggest player in the lending-against-jewellery segment but it is actually banks that hold a 70 per cent market share. Even rural banks lend against jewellery, so if a farmer wants some machinery or if there is a wedding he just goes with his gold to the bank and hopefully walks out with money. Then he repays this in 90 or 180 days, walks back with his jewellery. The estimate is that the amount of gold held as collateral is 800 or 900 tonnes—exculding the unorganised market.

So gold has significance beyond its immediate value?

Exactly—gold makes more people credit-worthy. It drives economic activity beyond what we see. Seasonal work is often gold-based. I know school uniform merchants, umbrella merchants who pledge family gold for ninety days when schools reopen. They get loans, stock up, sell, and on the 90th day, free their jewellery.

Is that why people prefer gold to bank accounts, FDs, etc?

Jewelery is an adornment but underlying even that is the fact that in the event of a crisis or need gold is the most liquid asset. I can go even to my neighbour and give my jewellery and walk away with cash.

Do the poor hold gold for very different reasons from the rich?

For the poor, gold is a walking ATM. For the top end gold is an asset class, helping them diversify. Say, the government allows up to $250,000 investment per annum abroad, in Nasdaq etc. For the common man, gold offers the same option—a foreign currency asset.

Why do more people not put their gold into the banks?

If they leave it with the banks as deposit banks would probably melt it. That’s one thing. Also, even in rural areas, people just can’t estimate how much gold a family holds. Gold is confidential, unlike land.

Yet, you could hold large quantities of gold as an inheritance.

Yes. Technically, you had to show that you inherited gold prior to 1960. At that time, though India had a lot of gold, India’s overall wealth was not very high. That became a reason why people did not want to disclose their holdings. Also, gold is considered woman’s wealth and tends to be an asset of last resort. It is almost like every house has a reserve bank vault accessed only in dire straits. Gold is thus an expense that can become an investment when you want it to. In fact, if people held gold mutual funds and equities that would have been best.

Why is that the best thing?

Because you don’t mark to market gold on a daily basis; if you bought gold today and its price falls tomorrow, you don’t say, oh, wish I had not bought gold, I lost money. You just look at your gold and say, I have got 200 grams of gold. That’s it. Gold’s classical properties—it doesn’t corrode, doesn’t rust, passes from generation to generation, a small bag can store gold worth lakhs—make it a very very desireable form of investment for women.

Yes, you see, it is difficult to take gold away by regulating it. If you say everybody has to come and deposit their gold—hypothetically—then people will just hold it in locker. I can’t possibly walk up to every woman and say, show me all the gold you are wearing. That’s impossible. If you put an artificial limit—which is not the case—people will hold it for future generations. There’s no rush for them to exchange. That is why it will not work and it is better to make sure that people buy gold through official channels. Lastly, for the middle class and the poor, gold means a lot. Even if they buy one gram, that means 250 million buyers—that is not going to go away.