The Year Of The Underdog

Twenty-five years after that life-changing victory in the World Cup, a walk down memory lane 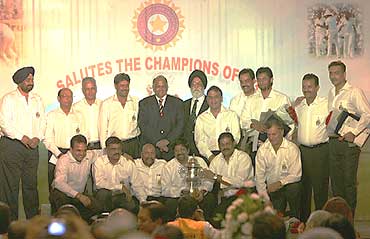 The marks of time are visible on them, in the form of hair that have greyed or gone, furrows on the faces that have filled out, and the strain on the buttons of the white shirt that proclaims them a winner of the 1983 World Cup. The eyes have dulled, the arms don't have the force of youth. They're human now -- their ability to do amazing things with and to the cricket ball is gone. They've become declamation artists, master of elocution, save the diffident Roger Binny, whose face still floods with red when he's invited to talk.

They are, every World Cup year, sought out to retell the story of their triumph. A few even have media contracts that restrict them from talking freely about the events of June 1983, events akin to the fall of a boulder into a tranquil pond, the ripples from which are still reaching the shores.

Kapil Dev, the captain of the team that beat the West Indies in the final 25 years ago, is one man who can and does talk -- and talk with mastery, if we discount grammar. He introduces each of the 13 men who played under him with wit and a flourish; he summaries them, condenses them into an apt idiom -- the polite, the self-effacing, the lovable, the disciplinarian idol and the joker.

The bonhomie among the class of 1983, men whose achievement brought subcontinental market forces to play, which altered equations among the cricket-playing nations, is evident -- though Ravi Shastri does say that when men work together, there always will be some "tickles". 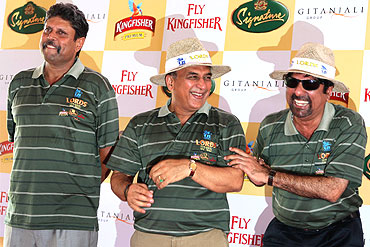 One major, administrative "tickle" was over whether the team should be honoured by the Board of Control for Cricket in India or not -- four of its members, including Kapil himself, are part of the rebel Indian Cricket League, and the son of a fifth plays in it. The BCCI, happily, saw light, though only after Sunil Gavaskar and Kapil Dev named the day and venue of their own party.

At the BCCI's party in New Delhi, the players were rich in their praise for their parent cricket body; all of them spoke of the state of their mind 25 years ago, as they effected the impossible in the final against the West Indies. There were sundry anecdotes, tales from the dressing room -- tales told often of that summer triumph, yet rousing all the same.

Kapil talked of how Amarnath taught him to wash clothes, to save a penny or two; Yashpal Sharma spoke of how anger at a Bob Willis sledge made him smash him in the semis; they all spoke of how it was impossible for K Srikkanth to walk without holding the wall for support -- else, he'd stumble over anything that could be in a room. 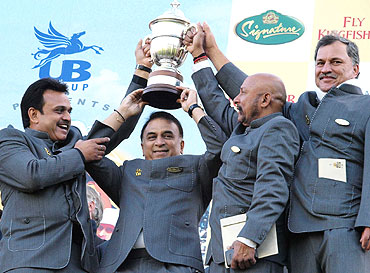 Sandeep Patil, then the playboy whose reputation was under threat from Ravi Shastri, said: "I was very, very sorry for Sunil Gavaskar, who was such a disciplinarian -- he was stuck with me as roommate for half the tournament! For when my lady friends used to visit me, poor Sunil had to go out of the room -- I don't know where he used to go! That was the reason he did not score runs. Then, for the latter half of the tournament, Ravi was my roommate -- and I had to go out of the room for him!"

They talked of other room-mating rituals -- Kapil and Binny, though fond of each other, could not communicate. Kapil's English was better than Binny's Hindi -- which is saying a lot.

NKP Salve, the oldest man in the hall, the BCCI president when the coffers were not exactly overflowing with silver, was besieged by the team after the win in the final.

"Twenty-five years ago, they were young, and I was still old!" Salve, now 87, chuckled. "And they cornered me after the final in the dressing room. Sunil Gavaskar asked what they'd get -- I said two lakh rupees, and he said they were not asking for a tip! Kapil was there in the background, instigating the others. I said three lakh, and Kapil said what's the difference between two and three lakhs! I said five lakhs, and they simply laughed. The BCCI did not have the money to give them."

But, said Salve, "though the Board was poor, the cricket was rich then". Then, with BCCI president Sharad Pawar sitting an arm's length from him, and with many IPL or ICL advocates beaming down at from the stage, he said: "We were poor, but the cricket was rich -- it was rich when we won the World Cup. When we won the World Cup, we got the joy and happiness that even 25 IPLs cannot bring."

IPL could be soon be twice-a-year thing; for India, the World Cup win remains once-in-a-lifetime affair. There's no comparison and that's why we keep going back to the class of 1983.

The Day That Changed Cricket