The Ugliness Of The Tamil Hero

Unlike Bollywood or other regional films, Tamil cinema heroes don't shy away from playing ugly. 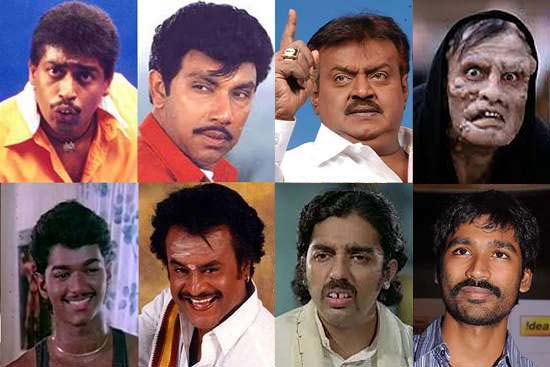 The closest Bollywood came to it was with the title of a film: Ugly. Bollywood’s version of heroes going unglamorous stops with a tonsure. Bollywood heroes from their 20s to 50s prefer to drop shirts to reveal gleaming torsos leaving the audience to count their pack abs. Not so in Tamil filmdom. A Tamil matinee idol of my mother's vintage possibly got a hike in asking price for every inch added to his waistline.

The fan base and fame of Tamil cinema’s leading men has not been based on their good looks. A hero’s plain looks invited comments but never affected his popularity if he was talented or had good fortune. And the icing is most Tamil heroes have always run an extra mile to turn horrid looking for a role to shock and awe the audience.

"The faces that look nothing extraordinary or plain are good for our movies because the Tamil audience is open to real looks," points out national award winning filmmaker, KV Anand. The Tamil people have a certain quality of acceptance of lack of good looks as they connect it to the genuine and resist artifice, especially in the male leading actor, he says.

Rajinikanth's unconventional rakish looks inspired a whole generation of actors naming themselves after him to ape his success. Vijayakanth, K Bhagyaraj, Chandrasekhar to today's Vijay and Dhanush have no swashbuckling looks to trip over but have won the fan following and adulation of generations of Tamil audiences.

Rajinikanth and his son-in-law Dhanush often mock their own looks publicly and are seemingly unaffected by their lack of star qualities. Their popularity stems from their unique brand of earthy accessibility, bucolic machismo, with a threat of misogyny and winning against all odds. Their brand of an unsightly guy with an aggressive overdrive seems to receive appreciation.

While the stars have their fan adulation, a Tamil hero with serious acting chops insists on looking disagreeable for a role. For an earlier generation of Tamil cinema goers it was Sivaji Ganesan. Navarathri (1964) had Sivaji play nine roles that required altered appearances, from that of an edgy bandit, a leper, an aged doctor, a vaudeville actor among others. In Deiva Magan (1969), the first Tamil film entry to the Oscars, saw Sivaji playing a man with a huge dreadful scar that deformed his face. Chennai-based Pritham Chakravarthy, professor of dramaturgy, says, "Tamil heroes want something they have not done before - it can be anything from limbless to mindless."

And then there was Kamal Hassan. I recall quizzing him many years ago, on why he went for those roles that make him look different. He shocked Tamil audiences and turned buck toothed, lame, cut himself to size playing a dwarf or played a drag with a seriousness that would make androgynous British rock stars proud. "There's only that much good looks can do; narcissism works well to a point," he had said. "Hassan’s filmography with a successful list of roles looking unattractive continues to be benchmark for the current crop of Tamil heroes. They are ready to collaborate with a big production house or filmmaker to look disagreeable for the part," says Anand.

Chakravarthy points out many of the disabled or unhinged roles have no deep study done on them, only romanticize the quirky and exoticise the ugly as long as the hero gets the pretty girl in the end. "Tamil cinema has always been interested in different looking people; and people do come in all size and forms. It is impossible for all to be Ken dolls," she says.

In contemporary times the Tamil heroes who want to be taken seriously play ugly ducklings. "This add-on macabreism is a new phenomenon," says Chakravarthy. Surya turned hunchbacked and bucktoothed in 2004 with Perazhagan or 'Most Handsome', with a touch of irony; National Award Winner Vikram in Sethu (1999) dropped weight and turned gaunt with a tonsure; he played a social outcast in Pithamagan in 2002 that received a National Award. And now, in the mega production I released last month, his character morphs from a muscular dude to a repulsive monster who is a throwback on Hunchback and Wolverine. The dramatic and grand mounting of filmmaker Shankar only magnifies the hero's grotesquery.

And turning repulsive is not just for bagging awards: the Tamil hero’s unconventional and abnormalities set the box office into a spin. So, next time a Tamil hero turns into a politically incorrect unhinged guy with pustules on his face and deformed limbs, don't be horrified. He is only keeping his audience fantasy fuelled that the hideous can trump the baddies and win beauteous damsels while leaving the producer richer.