'The South African Example Is Instructive'

The noted political commentator on the campaign of Boycott, Divestment and Sanctions (BDS) against Israel 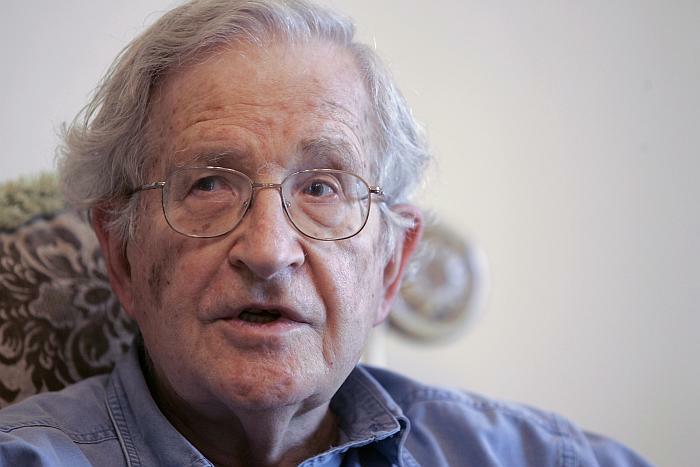 This interview was conducted for teleSUR English, which will launch on July 24

Michael Albert: Broadly, what is BDS [ Boycott, Divestment and Sanctions]—its aims, its means?

Noam Chomsky: As far as I can reconstruct the history, the first organized call for boycott of products of Israeli settlements in the occupied territories was in 1997 by the Israeli peace organization Gush Shalom, whose most prominent figure is the courageous and honourable long-time militant Uri Avnery. A number of boycott and divestment actions followed, but the next organized step was in 2004, when— to quote its website— “The Palestinian Campaign for the Academic and Cultural Boycott of Israel [PACBI] was launched in Ramallah in April 2004 by a group of Palestinian academics and intellectuals to join the growing international boycott movement,” following a number of earlier statements by Palestinian academics and intellectuals.

According to the BDS movement website, the next major step was in July 2005, when a broad group of Palestinian organizations issued a call urging “various forms of boycott against Israel until it meets its obligations under international law by:

That is not entirely accurate. The words “occupied in June 1967” were added somehow after the initial 2005 call. But I assume that this is now the official position. If so, the change was a wise one in my opinion. International law grants Israel within its recognized boundaries (the Green Line, established in 1949) all the rights of any state in the international system.

There have been many important BD actions (but not as yet sanctions)— some related to the BDS movement, some independent of it. The most far-reaching success is the policy directive of the European Union that forbids funding, cooperation, research awards or any similar relationship with any Israeli entity that has “direct or indirect links” to the occupied territories, where all settlements are illegal, as the EU declaration reiterates (the US agreed with this stance until Reagan, who downgraded “illegal” to “an obstacle to peace,” downgraded further by Obama to “not helpful to peace”). This past June the Presbyterian Church resolved to divest from three US-based multinationals involved in the occupation, another important step. Divestment from US firms is particularly significant because it not only punishes Israel for its crimes, but focuses attention on the crucial US role in supporting them, a necessary focus if there is to be any hope of real progress.

There have been real opportunities to move beyond BD to actual sanctions. The most important, which I personally have been urging for years along with others, is an arms embargo. A good basis was laid in 2009, when Amnesty International called for an arms embargo against Israel (and Hamas, but that is meaningless for the West). Furthermore, US shipment of arms to Israel is in violation of US law, the Leahy Law, as Senator Leahy himself has recognized in specific cases. With that basis, a successful campaign could be conducted that would call for by far the most significant sanctions— it’s not easy to think of other serious possibilities in the near future — and could be of enormous educational value in bringing about the changes of American public opinion that are essential if Israel’s criminal actions are to be ended. As long as Washington supports these actions, BD initiatives will have only limited effect. And mobilized public opinion can have an impact, as has been demonstrated over and over, often in much harder cases than this.

South African analogies are often invoked. Most are dubious, but one is highly relevant. To repeat what I’ve often said before, most recently in the Nation in June: in 1958, South Africa’s foreign minister informed the US ambassador that it didn’t much matter if South Africa became a pariah state. The UN may harshly condemn South Africa, he said, but, as the ambassador put it, “what mattered perhaps more than all other votes put together was that of [the] U.S. in view of its predominant position of leadership in [the] Western world.” For forty years, ever since it chose expansion over security, Israel has made essentially the same judgment. And a close look at the aftermath in South Africa, which I won’t review again here, indicates clearly the significance of the analogy.

In many other cases too. No analogies are perfect, but some are instructive. Take East Timor. For 25 years the US (and its allies) supported Indonesia’s virtually genocidal aggression and occupation. The Indonesian generals swore that the territory was permanently theirs. In September 1999, under considerable domestic and international pressure, Clinton quietly informed Indonesia that the game was over— something that could have been done for 25 years— and the army instantly withdrew, allowing a UN peace-keeping force to enter. In many other cases the US role has been decisive, and tactics focused on creating a popular base for changing it are of extreme significance. In the present case the importance is too obvious to merit much discussion.

Again broadly, do you agree or disagree with its intent, and why?

If you are recalling to the 2005 Call, the intent is fine. But we all know that intent does not much matter. Take, say, the anti-Vietnam war activism that took up much of our time and energy 40+ years ago. The intent of the Weathermen was admirable: to end the war, and other imperial crimes. But both of us opposed their tactics, as did Vietnamese, and for good reasons: their predictable effect was to increase support for the war and its atrocities. It should be unnecessary to stress what is second nature to activists: what matters is the predictable consequences of actions that are undertaken, not the intent, not even the abstract validity of slogans. That’s not what matters to the victims.

Beyond intent, do you have problems regarding its means, or worries about them?

In the present case, successful BD actions have been almost entirely— perhaps completely — limited to point (1) in the revised call: that is, to Israel’s criminal actions in the occupied territories. There’s a good reason for that. These actions are in gross violation of international law, and are almost universally opposed in the world. For 40 years, the US has been virtually alone in supporting them— while offering timid objections understood to be meaningless. That provides a strong basis for effective actions.

With regard to point (3), what matters for the victims is implementation of the right, not mere recognition of it. In fact, in formal and informal negotiations even Israel has indicated that it might support the right, as long as implementation is only symbolic. Unlike (1), there is virtually no meaningful support in the world for more than symbolic implementation of the right. If some such support ever developed— there are no signs of that today — Israel would object that UNGA 194 is a conditional recommendation and in any event does not have the force of law, unlike the Security Council resolutions that Israel violates regularly with US support. But the prospects are too remote to enter into concrete proposals for action.

There is only one possibility that I can see for implementation of the right: erosion of the borders imposed by British and French imperialism. That is by no means impossible. Not long ago, it seemed inconceivable that France and Germany could overcome centuries of horrendous slaughters and open their borders, but it happened. And in this case, before Britain and France carved up the region after World War I, borders were open. If there is another possibility, I am unaware of it.

There are also good reasons why BD actions directed to (2) have rarely if ever been successful, or even undertaken in any substantial way. While there is some basis in international law for recognition of equal rights within individual states, it is weak, and if considered seriously, would apply very broadly: to the US, for example. With dedicated educational and organizational efforts, a basis could be laid for specific application in the case of Israel, but that necessary preliminary work has not been done, and without it, initiatives directed to (2) are likely to be ineffective or even harmful to Palestinians.

Without bringing up specifics, we are both aware of initiatives that were well-intentioned but formulated in such a way that the objectives were swamped by irrelevancies that ended up harming Palestinians. And failed initiatives can often be a double harm: first in creating a backlash that strengthens support for the crimes of the criminal state, and second in the failure to make good use of available opportunities.

Last, given that you think there are some difficulties with the BDS campaign, how might they be avoided, and what other activities might people concerned about justice for the Palestinians undertake to help?

What should be done is to avoid the difficulties and adopt the tactics that are likely to be successful, both in punishing Israel for its crimes, and— crucially— in influencing public opinion in the US so as to create public pressure to compel Washington to end its support for these crimes— a decisive factor if they are to end.

There has been progress in these directions in decades of educational and organizational work. But there is a long way to go. In this case too the South African example is instructive. By 1960, global investors were beginning to abandon South Africa. By 1963, Washington indicated support for an arms embargo, though it did not honour the commitment. By the 1980s, when BDS actions began to be undertaken seriously in the US, opposition to South African apartheid was so severe that Congress was overriding Reagan’s veto of congressional sanctions. By 1987, even Israel, the last holdout apart from the US (and to an extent Thatcher’s England), was backing away from support for South Africa. To repeat, there is a long way to go, and these preliminary steps cannot be skipped if tactical choices are to be meaningful and effective.