Home  »  Website  »  National  » Interviews  »  'The Sangh Parivar Would Have Invented Something Else'
What If....

'The Sangh Parivar Would Have Invented Something Else' 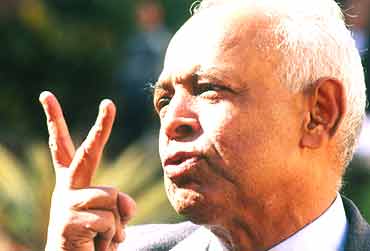 outlookindia.com
-0001-11-30T00:00:00+05:53
Syed Shahabuddin, the man who was right in the middle of all these controversies, was away in Malaysia when we tried to approach him in time for our special issue. Since he had just got back the day we were going to press, he decided to address all the three questions together.

All three questions are inter-related because the issues raised are regularly cited by Hindutva ideologues as the rationale and justification for the upsurge of Hindu chauvinism in the 80's.

My considered view is that even if the Parliament did not nullify the Shah Bano Judgement by legislation in May, 1986, the doors of Babari Masjid were not unlocked to convert it into a de facto Masndir in February, 1986, and the Satanic Versus had not been banned, the Sangh Parivar, in order to propel the BJP into the political space as a major player would have invented something else and propagated its theory that the Congress and all other national parties were pseudo-secular and were engaged in Operation Appeasement, to have a Muslim vote bank at their command.

It could have been militancy in Kashmir, Indo-Pakistan relation, conversion, infiltration or even Haj subsidy. In particular the Ram Janambhoomi Mandir issue would have been kept alive (as the only really contested issue) by all possible means to incite Hindu sentiments. Hindu communalism was not born in the 80's. It has a history of more than 100 years.