'The Players Refuse To Learn'

'The team can have one bad day, but to keep committing the same mistakes in all the matches is unthinkable' 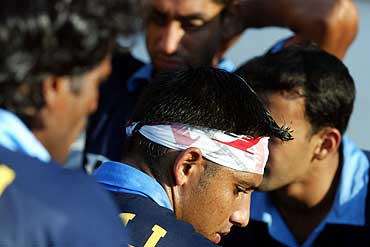 The reluctance of the Indian hockey team to learn from their mistakes surprises me. The team can have one bad day, but to keep committing the same mistakes in all the matches so far is unthinkable.

I have never seen the Indian team perform so badly against Argentina and the 2-4 defeat has demolished hopes of winning even a bronze medal in the Champions Trophy.

It is a real tragedy.

I am not at all happy with the way the mid-fielders have performed while the defenders have also been unimpressive. The poor quality in defending, tackling and controlling the mid-field was noticeable. None of the mid-fielders could raise their game to be effective at this level.

It is a mystery how even in the fourth game of the tournament, the Indians did not understand the importance of linking the forwardline on attack and also linking the deep defenders when defending the opponents.

It is pathetic that Viren Rasquinha and Bimal Lakra failed to do anything worthwhile on these aspects. I felt that the team was missing quality players like Tirumal Valvan and Arjun Halappa. Lifting the game in these situations is the responsibility of the mid-fielders. When this fails to happen, the pressure keeps building on the entire team.

I fail to understand why a player like Vikram Pillay is cooling his heels on the benches. In the deep defence, Jugraj Singh and Kanwalpreet Singh have lost their momentum and it appears they are too exhausted due to the failure of the mid-fielders and forwards. Even the normally unflappable Dilip Tirkey is committing mistakes.

The team has not been following a game plan or maybe they could not do so because of the intense pressure of winning the outing against Argentina. As a coach for seven years, I have also experienced similar situations when the team cannot implement the plans. But never has the team played so badly match after match.

Very soon, there will be a post-mortem as to what went wrong in Amstelveen particularly after all the hype that was created before the elite tournament. There may even be a high level probe which is quite common in Indian sports.

It is imperative for coach Rajinder Singh to regain his self-confidence and take complete charge of the team. He has to involve the players in his strategy sessions because their inputs can be vital.

When the team performs badly, the team management has to take command and get the message across to the players.

The match against Argentina was crucial for India to keep their medal hopes alive and it is this 'must-win' situation which took a heavy toll on the players. In such a situation, attacking hockey was the need of the hour but the Indians failed miserably.

But it is not they did not try. They succeeded in the first ten minutes of the first half. There were some good attacks by the forwards but the quality of shooting inside the 'D' was not good enough to beat the Argentinians.

The forwards -- captain Dhanraj Pillay, Gagan Ajit Singh and Prabhjot Singh -- were guilty of squandering whatever opportunities that came their way. The frontline kept committing too many errors -- losing the ball and indulging in unimaginative passes.

This gave the Argentinians, who play the game on soccer pattern both in attack and defence, the advantage they were looking for. Their three mid-field players did some good overturns with the ball and started rolling the passes to an unmarked forwardline.

There were some good overlapping attacks, interchange of position by the forwards, running into open space which made it too difficult for the tired-looking Indian defenders.

The Argentinians, with limited resources, started  executing the plans well and got their goals through frequent ball control inside the 25-yard line.

The Indian camp must be devastated by the performance so far and I sincerely hope that the team management will sit together and work out a definite plan when they take on Pakistan tomorrow. A win against Pakistan will at least salvage some pride.

From Title Contender To Also-Ran