The Perverse Politics Of Communal Manipulation

There is a combination of factors that suggests that 'declaration of martyrdom' of Bhindranwale should not be viewed in isolation, and that there is, in fact, a concerted pattern indicating that mischief is afoot once more. 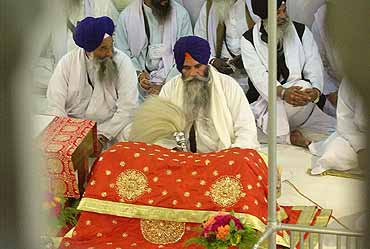 Punjab's political leadership -- and most particularly, that on the religious right -- appears to be entirely uneducable. 15 long years of terrorism in the State have failed to root out the perverse politics of communal manipulation that resurfaces every time the Akali Dal -- the party that claims to represent the Sikhs in Punjab, and that ruled the State through five deeply corrupt and inefficient years in power before it suffered a humiliating defeat in the February 2002 State Assembly Elections -- fails to secure a democratic mandate.

Thus, on June 6, 2003, on the occasion of the annually commemorated 'Ghallughara Divas' (Martyrs Day) which marks the anniversary of the ham handed Operation Blue Star, the Shiromani Gurdwara Prabandhak Committee (SGPC) declared Jarnail Singh Bhindranwale a 'martyr of Sikh history'. Bhindranwale was the man who initiated and led the bloody terrorist movement in the State between 1978 and June 1984, when he was killed in the Golden Temple during Operation Blue Star.

The 'declaration of martyrdom' came from the SGPC controlled Akal Takht, the highest seat of temporal power in the Sikh Faith. The SGPC and the Akal Takht are themselves entirely controlled by the Akali Dal, and have often been brought to the centerstage of the State's communal politics, particularly during periods of strife - as was the case during the extended violence of the Sikh separatist terrorist movement for Khalistan.

The Akali Dal is a partner in the Bharatiya Janata Party (BJP)-led ruling coalition at the Centre, and the move to confer a martyr's status on a terrorist leader certainly embarrassed the BJP, which sought to underplay the event, dismissing it as an "unfortunate announcement". There is little evidence of any of the political formations in Punjab responding seriously to the event -- and in isolation, it is, indeed, of little significance. A decade after the virulent Khalistani movement was decisively defeated in 1993, the violence of that phase has been explicitly rejected by the people of Punjab at large, and repeated efforts to revive the Khalistani ideology and terrorism have failed, despite vigorous support from Pakistan.

There is, however, a combination of factors that suggests that the 'declaration of martyrdom' should not be viewed in isolation, and that there is, in fact, a concerted pattern indicating that mischief is afoot once more. It is significant that the SGPC chose to associate itself with the commemoration of the Ghallughara Divas for the first time this year.

The adoption of the Nanak Shahi calendar -- which establishes a separate 'Sikh era' commencing with the date of birth of the first Sikh Guru, Guru Nanak, and which is regarded by many as a move to deepen the communal divide between Hindu and Sikh in Punjab -- on April 13 this year, is another event that points to the politics of communal polarization being revived once again.

More significantly, some of the most vicious mass murderers of the Khalistani movement, as well as their most prominent fundraisers and ideologues, have taken the 'surrender route' over the past year, or have simply returned to the Punjab, unhindered and unquestioned by the state, from their terrorist safe havens abroad. Most prominent among these are Jagjit Singh Chauhan and Wassan Singh Zaffarwal.

Chauhan was the self-styled 'President' of the Khalistan 'government in exile' who returned to his home in Tanda in the Hoshiarpur district of Punjab in June 2001 after 25 years in London. After his return, rejected by the democratic mainstream, Chohan established the Khalsa Raj party, which still aims to establish a separate 'Sikh nation'. His initial public posture was conciliatory, and he spoke of establishing Khalistan 'through love and compassion'. However, he is reported to have delivered an inflammatory speech at this year's Ghallugara Divas gathering.

Zaffarwal is the former head of the Khalistan Commando Force, one of the most vicious terrorist organizations during the years of terror, and had moved from Pakistan to a safe haven in Switzerland, but chose to return to his village in Gurdaspur in April 2001, and now harbours ambitions of 'entering politics'. The Indian state has failed to prosecute or punish these and the hundreds of other former terrorists in currently in Punjab, only a few of whom have been subjected to a desultory judicial process, but with an abysmal record of convictions.

This is not all. After nearly a decade of silence, the 'human rights' platform is once again being activated by front organizations of the Khalistani terrorists, giving currency to the most audacious of falsehoods in a concerted campaign of fabrications. Chief among such efforts was the publication in May this year of a book by one such organization styling itself as the 'Committee for Coordination on Disappearances in Punjab' (CCDP).

There appears to be a sudden revival of such propaganda and other activities by terrorist front organizations, including continuous efforts to mobilize support abroad. Significantly, a ham-handedly propagandist programme on alleged human rights violations in the Punjab was recently aired on BBC radio as well.

Other developments that require attention in this context is the distribution, earlier this month, by the London-based Punjabi Radio of 'relief' ranging between Rs. 10,000 and Rs. 50,000, to ex-terrorists, their wives and families during a function at a Gurudwara at Jalandhar. There are also increasing reports of networking between Narain Singh Chaura's Akal Federation and Kanwarpal Singh Bittoo's Dal Khalsa, as well as between these organization and like-minded groups abroad.

These loose strands are bound together by Pakistan's unrelenting intent to do mischief in Punjab. In December last year, Deputy Prime Minister and Union Home Minister, L.K. Advani spoke of "a new strategy" under which "Pakistan's ISI has again started toying with the idea of reviving militancy in Punjab with senior officials including President Pervez Musharraf reportedly having meetings with pro-Khalistan leaders during the birth anniversary celebration of Baba Guru Nanak."

Significantly, Musharraf is reported to have had a closed door meeting with UK and US-based extremist leaders, including Pritpal Singh, convenor of the American Sikh Gurdwara Prabandhak Committee; Gurmeet Singh Aulakh, president of the US-based Council of Khalistan; Manmohan Singh Khalsa, the UK based leader of the Dal Khalsa; and Ganga Singh Dhillon, the US-based president of the Nankana Sahib Foundation.

It is important to note, moreover, that at least five of the persons on the '20 most wanted' list that was handed over by the Government of India to Pakistan are Khalistani terrorists that India believes continue to be located in Pakistan. They include Gajinder Singh, 'chairman' of the Khalistani Commando Force; Wadhaawa Singh Babbar, chief of the Babbar Khalsa International; Ranjit Singh Neeta, 'president' of the Khalistan Zindabad Force; and Bhai Lakhveer Singh Rode, chief of the International Sikh Youth Federation.

Pakistan's plans for a revival of Sikh militancy have manifested themselves periodically -- for instance, in a brief campaign of random bombings at soft targets in the Punjab between March and July 1997, in which 55 civilians were killed; and again in the appointment, in April 1999, of Lt. General Javed Nasir, a former chief of the ISI, as the chairman of the Pakistan Gurudwara Prabandhak Committee - an organization established to take care of Sikh shrines in that country, including the revered Nankana Sahib. Jathas or groups of Sikh pilgrims who travel to these shrines each year are regularly harangued by Sikh extremists in efforts to revive recruitment to extremist ranks.

The lessons of the years of terrorism have not been lost on the people of Punjab, and there is now widespread popular revulsion against the activities of those who committed slaughter in the name of the Sikh faith. The revival of terrorism among those who remember that dark phase of the State's history is improbable, if not impossible. But there is a new generation that is now growing up without any memories of that period. To beguile this generation to take to the terrorist path may not be as difficult a task.

A revival of militancy in Punjab is a possibility that the Indian state must constantly guard against with the utmost vigilance. Bringing the guilty of those long years of terror to justice must be one of the instruments of such a defense. A state that fails persistently to punish even the worst of its criminals will eventually come to be ruled by them.

K.P.S. Gill is President, Institute for Conflict Management which runs the South Asia Terrorism Portal and brings out a weekly - South Asia Intelligence Review - courtesy which this piece appears here.

'Ayodhya ...Can Be Resolved Only When It Is Freed From Politics...'