So what is this about closer co-operation with the centre and words like performance and accountability? LF chairman Biman Bose explains. 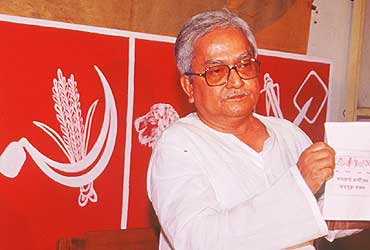 The Sixth Left Front in Bengal has initiated a series of measures not readily compatible with the Left political establishment. Along with the ongoing drive to improve discipline and accountability in government offices, schools and colleges, illegal encroachers have been cleared from the Tolly's nullah (canal) area, while squatters have been evicted from at least four government hospitals and suburban railway tracks. Except for Tolly's nullah area squatters, no compensation has been paid.

The Left government has announced similar projects in Sealdah and Howrah stations as well as the Rabindra Sarobar area, to expedite development projects and improve infrastructure.

What has not been reported in the local media is perhaps more politically significant. Both the form and content of Left-sponsored movements in the state could be in for a major change. When some time ago Left students proposed to block train movements to protest against the fare hike, LF leaders firmly overruled them. Such protests brought misery and suffering for the people and it was better to stick to standard demonstrations, the leaders told them.

Now Biman Bose, the dynamic chairman of the LF, outlines a bolder proposal that he proposes to offer for a larger debate. In an exclusive interview to Outlook, he spelt out his thinking that carries an important message for the Indian Left as a whole.

'Too often, political parties, especially in the Opposition, agitating on any issue, aim at achieving what it seen as a total victory, to secure their demands in toto. I suggest that instead of this all-or-nothing approach, why not be more flexible? The country is passing through a major economic crisis, the world economic situation is no better either. In a class divided scenario, exploitation and injustice will remain.

'No government can possibly meet every demand of the people, despite its best efforts. To move forward, you must also be patient. Even if there is a partial satisfaction of some demands, why prolong agitations endlessly, why not wait for another round of struggle?

'I agree that we (the Left) in the past have carried out such long agitations, but have learnt from our experience. Restraint and consolidation are as important, if not more so, as militancy.'

Brave new words, even if they do not jell with what party secretary Harkishan Singh Surjeet said in 1996. 'The CPI(M)) is the only revolutionary party in India.' With the Left's known penchant for militant agitations on major issues, can Bose guarantee that his thinking will gain currency within the CPI(M) and its mass organs, never mind other Left parties?

Bose is determined. 'I will discuss my ideas with other Left parties. There is no reason to suppose that Leftists do not understand the present complex situation.' What he proposes involves a major shift of tactics for the ruling LF in Bengal, if not its long term strategy, and could trigger an ideological turmoil in the Left.

No prophet outcast, Bose lends his political imprimatur to what is being practised by Chief Minister Buddhadev Bhattacharya and his team in the executive sphere. Unlike his other senior colleagues Bhattacharya and state secretary Anil Biswas, Bose did not graduate to party membership through an apprenticeship in the mass organisations. He joined the party directly in his teens.

Recent announcements of Bhattacharya, too are in consonanace with Bose's line. 'We shall not tolerate labour indiscipline or violence:  teachers and government employees must fulfil work norms, punctuality and attendance. Rail rokos, and traffic disruptions should not be organised by anyone, they cause much inconvenience to the people.'

Don't such concepts and slogans take the CPI(M) iedologically closer to the new liberal Left movements in Europe? Bose disagrees. 'I am familiar with new Left ideas. We do not subscribe to some of their formulations. There can be no change in the basic Left concepts. But yes, we have to implement them in our own local circumstances.'

Unlike the CPI(M), the new Left does not rule in any country, except as junior coalition partners in some countries.

Left observers point out that its commitments as a ruling entity are catching up with the LF fast. In the classic sense, Left parties were never geared or structured to run governments for long periods. 'Throughout the eighties, we feared that the Centre would dismiss us any moment, as it did in 1967 and 1969. Before the 2001 Assembly polls, we expected to win narrowly. We feared the Trinamul Congress would push us to the limit. Yet people voted for us in larger numbers than we hoped for,' admits a CPI(M) state committee member.

Says Bhattacharya, 'This time (in 2001) people looked for a change and we heeded the warning, implying that a pracactive administratrive policy was now a pre-condition for political survival.' This lends meaning to his slogan,. 'Do it now'.

According to an observer, 'The new Left argument is, if rule we must in Bengal, let us make a good job of it. Jyoti Basu had voiced many of today's slogans, specially about better discipline in hospitals and offices. But he never followed them up. Naturally no one listened to him.

'Now rid of Basu's shadow, Bose and Co. exercise a more rigorous political coordination. Ministers are grilled at LF meetings, analysing the nitty-gritty of official business which never happened before.'

The shift within the Bengal Left is defined also by its need to survive in an exceedingly hostile milieu. Socialism has collapsed in the former USSR and East Europe. China and Cuba remain Left role models, but there has occurred a sea change in their economic policies over the years. 'The Indian Left too must change, adapt to new realities and survive or perish,' says veteran observer Charubrata Ray.

The present CPI(M) leadership in Delhi and Kolkata have learnt their lessons from the Chinese model. Case studies are Basu's concession to multinationals and foreign capital in the eighties.

After Basu, the Left's national policies specially its anti-Centre approach is also under close review. Despite protests against the saffronisation of education in India, Bhattacharya talks openly of  'close cooperation with the Centre', adding that 'We do not seek any confrontation.' His personal rapport with Prime Minister Vajpayee, L.K. Advani, Pramod Mahajan, Sushma Swaraj, Ram Naik and others is common knowledge.

Naturally, doubts have been expressed about the CPI(M)'s restraint, both among the party's Left allies and the Opposition. The TMC leaders point out that even recently Basu had reminded workers that they should not give up their right to strike.

Mamata Banerjee said 'Those who specialised in disruptive agitations have woken up after three decades!' The CPI and the RSP maintained that at times, agitations that impinged on civic rights became unavoidable.

Bose admits, 'We had carried out such agitations earlier, but that does not mean we cannot explore other means of protest!'

Bose, Bhattacharya, and Biswas are consciously engineering a major image change for the Left; from a non-performing dormant, declining force that exists only as a truculent petitioner before the Centre, to a performing, accountable political entity that could highlight its own achievements.

Major features of this image-restructuring agenda are implementing time-bound programmes with mass involvement and targetted at an improvement in public life.

'Are We Ready To Win The War?'