The Neglected States Of The Nation

Why have the seven-sisters suffered from so much neglect and apathy and been out of the mainstream consciousness of heartland India? Who's to blame? Who's to do something about it? 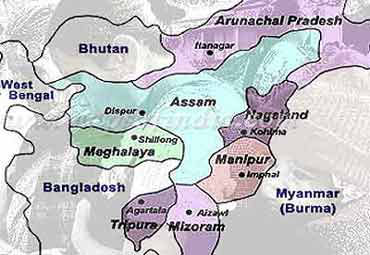 "A parallel system of governance by the insurgents on the one hand and Ministers, MLAs, the bureaucracy and police on the other is responsible for the political instability in the Northeast."

The North-East Study Group (NESG), set up by the MHA, is basically an advisory group to keep the security situation in the Northeastern states under constant watch and recommend suitable measures for remedial action to the ministry. Unfortunately, while the NESG's observations are well known and well documented, not much is known about what is being done to break the nexus. And the reason lies in one word: nothing. Because nothing is being done.

Let's take a look at the present scenario in the region. The Northeast, which compromises eight per cent of India's total area and just four percent of its total population, has understandably remained on the periphery of mainstream India's sub-conscious. Though, it has of course become fashionable to say that New Delhi has started giving much more importance to the region over the past couple of years and that now, at last, the Northeast will be brought at par with the rest of the country. It will be a folly to accept this view at face value.

The region has suffered from so much neglect and apathy that it seems next to impossible to catch up with the other parts of India. Having said that, I must confess here that I do not subscribe to the popular and very convenient view that the Northeast has remained backward simply because Delhi neglected it.

Yes, Delhi did not bother so much about the region, and, as I said earlier, does not bother much even now except paying lip service, but the isolation of the Northeast also has much more to do with failure of leadership and the lack of initiative on part of its own people.

For years, a section of the leadership and the educated elite among the Northeastern states have become willing partners with the 'exploiter' class from Delhi and mainland India. And this process began not today but almost three decades ago. If Jawaharlal Nehru, was the over-sentimental benevolent dictator, bestowing largesse on the simple tribal folks, his daughter Indira Gandhi initiated and then perfected the art of buying over the Northeast. One illustrative example of Jawaharlal Nehru's over-generosity' in the early sixties came in Nagaland.

The Legendary AZ Phizo had just launched the insurrection in the Naga Hills in the then composite Assam. And the Naga National Council was demanding more autonomy to the area. As the first prime Minister's cousin and former Governor of Assam, BK Nehru told me in an interview in 1990, "Jawaharlal had this sentimental thing about the Northeast tribals. When the Nagas were just demanding an autonomous district, he gave them a a whole state and that really opened the pandora's box."

It is of course debatable whether BK Nehru was right. The moot point to note is that the decision in 1963 opened the floodgates for similar demands from different parts of the Northeast. The formation of Mizoram and Meghalaya were a direct result of creation of Nagaland. And today, the demands for a separate Bodoland, Rabhaland, Missingland and Karbiland stem from that 40-year old decision.

The logic of Bodoland is irrefutable, if you apply the yardstick of numbers. If about half a million Nagas and Mizos could be given a separate state, what crime have nearly two million Bodos committed not to deserve a separate homeland? But the Bodos perhaps choose to ignore the ground realities in these small states. Today the entire Northeast is dependant upon mainland India more than it ever was. There is no internal revenue generation worth the name in these states, private enterprise is more an exception than a rule and a majority of the population is dependant upon the government one way or the other.

As I see it, the region is trapped in a vicious circle which, despite the best attempts, no one has been able to break so far. Let us go back to the partition and/or Independence of this country. Northern India suffered heavily in terms of lives lost during the turbulent period of partition, but the East and the Northeast took a body blow in terms of infrastructure and links to the mainland. With one stroke of his blue pencil, Sir Cyril Radcliffe isolated the region from the rest of India.

As a result, the region's seven states are now connected to the main body through a 20km wide Chicken's neck corridor running through North Bengal. In the pre-partition days, residents of Tripura could reach Calcutta overnight. Today it takes a minimum of 60 hours to do the same.

So the first problem is isolation. Physical isolation aggravated the already existing mental quarantine. The British, as a deliberate policy followed the dictum of leave-them-alone in splendid segregation. The new rulers in post-independent India refined it further by their out-of-sight-out-of-mind attitude.

The result: armed uprising in many parts of the North-East.

The legendary Mizo leader Laldenga once told me in a moment of introspection: "You know if Shillong (which was the capital of composite Assam), had been little more informed and aware of the situation in Lushai hills during those fateful years, we probably would not have had to go into the jungles and take up arms."

Laldenga was referring to the famous famine in the Lushai Hills in the early sixties which was brought about by flowering of the bamboos and the subsequent growth of rodents. The rulers in Shillong simply did not have a clue about the situation in those areas. Lack of attention by the administration forced Laldenga and his comrades in arms to rise in revolt.

The point I am trying to make here is: except for the Naga revolt, most of other insurrections in the region, are a direct fallout of this neglect of the area by the ruling class both in Delhi and in the region.

That's the second problem in the Northeast: Neglect. The natural consequence of neglect has led to the third area of concern: insurgency.

Large scale misuse of central funds has widened the gap between the haves and the have nots, resulting in frustration among the youngsters. This frustration has often found expression in the swelling ranks of the militant organisations across the region.

Nothing illustrates the neglect of Northeast by the centre as the figures of funds released by All India Financial Institutions. Out of the 50,000 crore plus sanctioned by these institutions, Assam got a measly 114 crore, Nagaland Rs. 4 crore and the rest of the states went without a single paise. All the states in the region are today heavily in debt; Assam's internal debt today in fact stands at a staggering Rs. 6,000 crore.

And this despite the fact that all the states come under a special category bestowed by the Planning Commission. Under this status, all of them get 90 per cent of the plan funds as grants and only 10 per cent is given as soft loans. And yet every other state in the region is facing bankruptcy.

Why has it happened?

There are no clear-cut answers, but endemic corruption and poor management of funds are the two main reasons I can think of immediately. The funding pattern, evolved over the years has given rise to a nouveau riche class comprising mainly of politicians, a section of bureaucrats and businessmen in the state.

Despite fairly rich natural resources, Assam, the region's biggest state suffers from the underdevelopment syndrome of low and almost stagnant agricultural deficiency, low rate of capital formation and mounting unemployment. The general underdevelopment has provided necessary breeding ground for social unrest. This social unrest in turn has translated into insurgency.

According to conservative estimates, there are 15 lakh educated unemployed youths in the region. So far the government has been the main employer. With time, however, the jobs in the government are becoming few and far in between. Naturally, with hardly any jobs available outside the government, the youth do not need much encouragement to take to arms since it provides easy money when you have a gun in hand. Insurgency today therefore has become a big business. One educated estimate of the turnover in this 'industry' puts the figure at something like Rs. 250 crore annually!

So, have we lost the Northeast forever. I, for one, do not believe we have. Having traveled and worked the length and breadth of the region over the past two decades, I am convinced that the Northeast has several things going for it to catch up with the rest of the country. Unlike most other states, the Northeast has a very high percentage of literacy. This itself should be a major strength.

All that this pool of manpower resources needs is proper direction. Take the natural resources available with the region. Arunachal Pradesh has so much of water resources available that it can produce about 30,000 MW of electricity through hydel projects. This energy is not only sufficient to feed the region's states but also to export to the neighbouring countries as well.

Another point that the Northeast has in its favour is the proximity to Southeast Asia. Identified by economic experts as the boom area of the 21st century, Northeast India provides the ideal gateway to the Southeast. Mineral wealth, so far untapped in the region, is another plus. And, at the cost of repeating myself, let me add that even if the agriculturists adopt a two crop-system, the food grains productivity would go up tremendously. Once agriculture booms, industry is bound to follow.

I have a prescription for the region, borne purely out of observation and interaction with the people in the course of my travel. This is what it is:

The big question, however, is who will do this? Not retired mandarins. Not people from MHA. After all these bureaucrats did not do much when they were in positions of power. MHA will continue to pay lip service to the cause of the region.

Ultimately, it is the younger generation from within the region which will have to take up the lost cause and bring the region out of its current mess.