'The Mood Within The Party These Days Is Not Upbeat'

'The results in Uttar Pradesh, the manner in which the party welcomed BSP Ministers who were removed by Mayawati ji on charges of corruption, the party’s handling of Jharkhand and Karnataka – all these events have undermined the party’s campaign agai 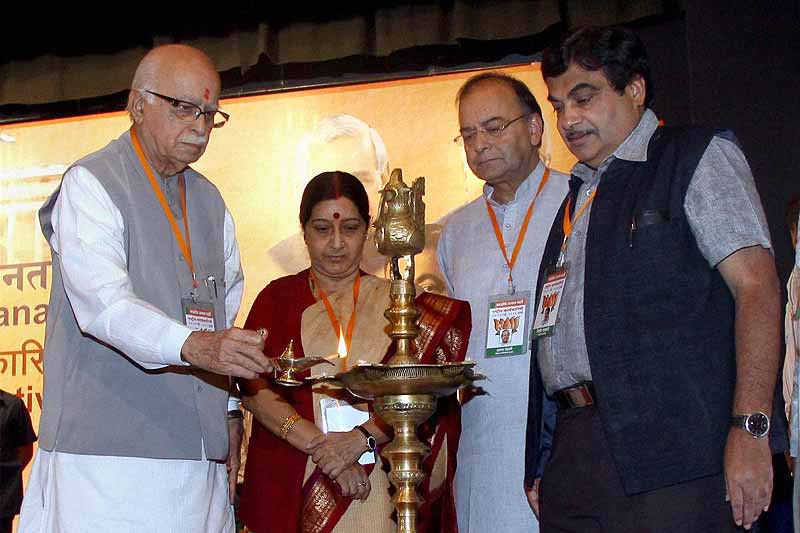 We reproduce Mr L.K. Advani's blogpost, titled BJP: Hub of hope, which is said to have upset the BJP president not only for what it said but what it did not: while praising the leadership of Mr Arun Jaitley and Ms Sushma Swaraj, Mr Advani there is no mention of Mr Gadkari or even Mr Modi. Significantly, after quoting Mr Swapan Dasgupta who critiqued the media for an "overdose of ‘sexed up’ stories on the ‘unhappiness’ of LK Advani and Sushma Swaraj’s ‘boycott’ of the public meeting where Modi had the star billing. The net conclusion: the BJP was still at war with itself", Mr Advani goes on to affirm that "the media is reflecting the public opinion correctly" and that "the BJP led NDA is not rising to the occasion". That the party seems split wide open is also clear from circulating reports today that Mr Modi may contest next Lok Sabha election from Gujarat and UP. In short, the blog, despite its title, offers no hope—it only emphasises the need for introspection:

Politicians are generally critical of media persons. It is, however, rare that media men themselves ridicule their own fraternity for indulging in political criticism not because it is justified but because even while realizing that the criticism is uninformed and superficial, the write ups do add up to “lazy copy”.

Swapan Dasgupta is an eminent journalist who commands great respect in the capital. His page one piece every Sunday in the Pioneer is read with great interest. His latest column (May 27, 2012) is a severe comment on the media which he holds “shapes the tone and tenor of the chattering class discourse”.

Under the caption “Media creates its own realities”, Dasgupta wrote last Sunday:

“Given the fact that the media thrives on stereotypes, caricatures…. it was not very surprising that the bite brigade that descended on Mumbai last week for the BJP National Executive was looking for reaffirmations of set conclusions.”

Swapan added a perceptive summing up:

“That everyone in the BJP is not on the same page is a truism. No political party in India, not even the CPI(M), possesses an army where every member of the officer corps think alike. This is democratic normalcy and it is only in India that the media projects the ideal of politics crafted on the North Korean model.”(A Marxist uniformity !)

However, when these days media-persons attack the UPA Government for its string of scams, but at the same time regret that the BJP led NDA is not rising to the occasion, I as a former pressman myself, feel they are reflecting public opinion correctly.

At a meeting of the BJP’s Core Committee some weeks back, a meeting attended by several senior RSS leaders I had reminisced about my sixty years’ political journey since the launching of the Bharatiya Jana Sangh in 1951 by Dr. Syama Prasad Mookerji. I had said that thinking of the party’s successes and failures during these sixty years, I cannot think of a more depressing year than 1984, when in the Eighth Lok Sabha Elections that took place that year, our party had put up 229 candidates. Our score in the Lok Sabha was a miserable two, one from Gujarat and the other from Andhra. In all the other states of the country, including U.P., Bihar, Rajasthan, Madhya Pradesh, Maharashtra, we had drawn a blank. Even in the first General Elections to the Lok Sabha in 1952, our party had captured three seats, more than in 1984!

In 1984 I was Party President and so felt extremely downcast. But I also remember that the party had set up a Committee headed by Krishan Lal Sharma to analyse the poll results objectively. The Committee had reported that in the rank and file of the party as also in our support base, there was no demoralization because of the electoral setback, which was being attributed to the dastardly assassination of Smt. Gandhi by terrorists and a powerful sympathy wave for young Rajiv Gandhi.

The mood within the party these days is not upbeat. The results in Uttar Pradesh, the manner in which the party welcomed BSP Ministers who were removed by Mayawati ji on charges of corruption, the party’s handling of Jharkhand and Karnataka – all these events have undermined the party’s campaign against corruption.

The fact that we have a sizable contingent of MPs in Parliament today as against the niggardly two seats in 1984, that our performance in the two Houses under Sushmaji and Jaitleyji has been excellent, that the party is in power in as many as nine states today is no compensation for the lapses committed. I had said at the Core Group meeting that if people are today angry with the U.P.A. Government, they are also disappointed with us. The situation, I said, calls for introspection.

A year and a half ago, Avtar Kishan Hangal aka A K. Hangal, who had made millions weep with his heart-rending roles on screen was fighting illness and poverty at his residence in Santa Cruz East.

But things are now changing for the actor who had also been an active participant in the national struggle for freedom. The 97-year-old actor after starring in over 200 films, is all set to return to the small screen with a brand new show, Madhubala. He has been a part of several shows in the 1990s.

The actor will play himself on the show that is reportedly based on the life of veteran actress Madhubala. In fact, Hangal shot for the part a couple of days back.

Hangal came on the scheduled day and shot for nearly an hour. “It was something that we had never imagined possible. He has unique energy. It was like a blessing for us. Even his son told us how happy he was to shoot after almost seven to eight years. We were all charged up seeing him on the sets. That one-hour was purely magical. I did not know whether he would be able to pull it off at this age. But he managed to give a one-take shot. It was wonderful”, said Saurabh Tewari, the producer of the show.

I remember that in the sixties and seventies, there were journalists who often used to compare the Jana Sangh with film actor A.K. Hangal and say that Hangal is always admired by cine-goers. But he cannot sustain a full film by himself. He is a brilliant character actor. But he is not a star: neither a hero, nor even a villain. Jana Sangh’s position in Indian politics is similar. Its patriotism and integrity secures for it the plaudits of all; but the party will never dominate the political scene.

I recall challenging such comments, and asserting that a day will certainly come when the situation will undergo a complete metamorphosis. That has now happened. Today BJP has become converted into such a hub of hope for all, that if it commits even a minor lapse, it does cause distress and disappointment to the people.