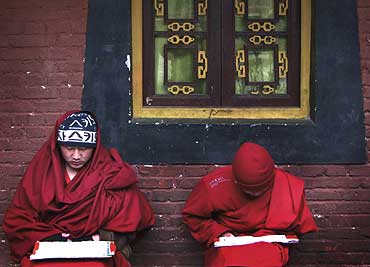 After a relative lull of about nine days from March 19 to 27, 2008, there has again been unrest in Tibet and the adjoining Tibetan-inhabited areas of Sichuan, Gansu and Qinghai in the form of public demonstrations by the Tibetans and clashes with the security forces when they tried to disperse them.

Since March 27, 2008, the anti-Beijing and pro-Dalai Lama incidents have been more frequent and widespread in Sichuan and Gansu than in Tibet. The last confirmed report of demonstrations in Lhasa was on March 29, 2008, when a large number of monks and youth tried to take out a procession, but were dispersed by the People's Armed Police units. Subsequently, there were reports of strikes by Tibetan students in a number of educational institutions of the adjoining provinces.

On April 3, 2008, at least one Tibetan monk was killed and many monks and students were injured when the the People's Armed Police opened fire on a crowd of nearly 1,000 monks and others near the Tongkor monastery in the Kardze area. The crowd was demanding the release of two monks earlier arrested by the Public Security Bureau. However, Tibetan exile groups have alleged that at least 15 Tibetans were killed in the firing. There was another protest by a large number of Tibetan monks and students on April 5,2008, in the same area. Fifteen Tibetans were injured when the police opened fire to disperse them. There are so far no reports of any fatalities. The official Xinhua news agency has admitted the incident of April 3, but not the incident of April 5. 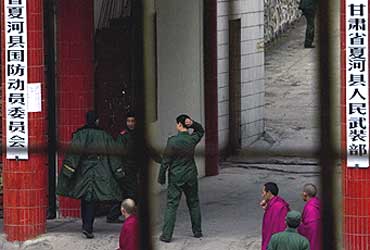 Tibetan monks walk past the military headquarters along the main street of Xiahe, western China's Gansu province on April 3, 2008

The post-March 27 incidents have been triggered off by the continuing wave of arrests of suspected participants in the violent incidents between March 10 and 18, 2008, and by the launching of a "patriotic re-education" programme in all the monasteries and educational institutions by the local Bureau of Public Security. Under this programme, all monks and others are asked to gather in the centre of the towns and shout slogans denouncing the Dalai Lama as a traitor and affirming their loyalty to China. The Chinese intelligence and security forces personnel have also been searching houses for pictures of His Holines. The monks and students are then asked to make a bonfire of the pictures.

The monks and others have been countering the security forces by shouting slogans praising the Dalai Lama and calling for his return. Other slogans shouted by the demonstrators called for Tibetan independence in some towns and for democracy and the end of the Communist rule in some other towns. In places where the influence of the Tibetan Youth Congress (TYC) is strong, the slogans shouted were for independence and in places where the TYC is not very active, the slogans were for democracy.

Since March 14, 2008, when rioting Tibetan demonstrators in Lhasa attacked Hans and damaged or destroyed their property, there have been no other similar major incidents of anti-Han violence. The post-March 27 incidents have been directed mostly against party and government officials, including members of the security forces.

The Chinese authorities have claimed to have recovered a large quantity of arms and ammunition during house searches. Photographs of arms and ammunition allegedly recovered have been carried by the government-controlled media. There is no way of confirming their claims. From the reports of government-organised bonfires of the Dalai Lama's pictures received from the interior areas, it would seem that thousands of his pictures have been smuggled in despite the fact that it is a crime to possess his picture.

Since the Chinese occupation of Tibet in 1951, Beijing's policy towards Buddhism and the monks has passed through three stages. Between 1951 and 1959, the Chinese authorities refrained from interfering in religious matters. After the escape of His Holiness to India in 1959, they brutally suppressed Buddhism and the monks. They closed down the monasteries, confiscated all jewellery and other costly articles kept in them and forced the monks to give up their lives as monks and live like ordinary persons. The Buddhists and their monks also became the brutal victims of the Cultural Revolution.

Deng Xiao-ping changed this policy in 1979. The monasteries were re-opened and they were allowed to recall the surviving old monks recruited during the days of His Holiness and ordain new monks after the new entrants had been security-vetted by the Party and the Ministry of Public Security. Side by side with their religious education, the new entrants were also required to attend classes in patriotic education conducted by the local Communist Party. The lessons in these classes denounced the Dalai Lama and praised the leadership of the Communist Party. While allowing the monasteries to re-open, the Chinese drastically reduced the number of monks allowed in each monastery. The Chinese also forced those in charge of different monasteries to ordain a certain number of Hans as monks so that no monastery consisted exclusively of Tibetan monks. They were apparently using the Han monks to spy on their Tibetan counterparts.

The Chinese leadership was very confident that as a result of these measures and the patriotic education campaign and the economic development in the area, it had been able to eradicate the influence of the Dalai Lama on the monks and the local population. They have been totally unnerved to find that their confidence was misplaced and that the influence of His Holiness remains as strong as ever. They have been particularly shocked to find that the monks ordained after 1979 after being vetted by the Public Security Bureau are also as devoted to His Holiness as the pre-1959 vintage of monks, who were ordained by His Holiness. Not only that. The Hans infiltrated into the monasteries as government-sponsored monks were totally oblivious of the goings-on inside the monasteries before the uprising broke out on March 10,2008.

In the disturbances since March 10, the old vintage of monks has remained by and large peaceful. While they shouted pro-Dalai Lama slogans, they avoided any violent confrontation with the Chinese security forces. It is the younger monks ordained under the strict supervision of the Communist Party and the Public Security Bureau after 1979, who have been in the forefront of the demonstrations and violent incidents. They have been effectively networking with the local members of the TYC, which has reportedly set up many sleeper cells.

The Chinese authorities have been adamant that they would take the Olympic Torch to Tibet whatever be the consequences. They intend taking the torch twice. On the first occasion in the last week of April and the first week of May, it will be taken to the top of the Everest. It will then be taken to other Chinese provinces. It will be brought back to Tibet between June 19 and 21, 2008, and taken across Lhasa and some other towns. A further escalation of violence can be expected during these two periods.