The Man In The Middle

He is not here to mediate but to direct the VHP to take a particular course, and in case they remain adamantine, surely, he always has the option of appealing directly to the Hindu community at large... 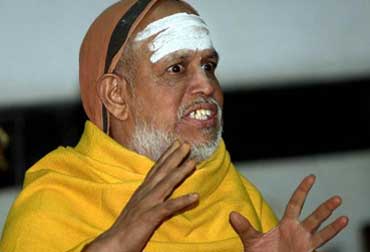 First things first, the Shankaracharya of Kanchi, is as far removed from the VHP's assorted sadhus and sants as chalk is from cheese.

The Kanchi Math truly symbolises the spirit of Hinduism, and takes pride in a way of life more tolerant, philosophical and non-didactic than any other religion in the world -- with a huge hulking white mosque looming in front, and as Anita Pratap reported a few weeks back, "allegedly built over a Hindu temple. Many years ago, there was a campaign to tear it down. But the 68th pontiff, Jayendra Saraswati's predecessor, the late Chandrasekharendra Saraswati, a venerated Hindu philosopher, put his foot down. The movement withered away and so today, math and mosque coexist peacefully."

The Shankaracharya doesn't find the mosque offensive. "It's not a symbol of division. It is a symbol of Hindu-Muslim unity. It shows we can and must coexist peacefully. If there is love in our hearts, it doesn't matter how close the mosque is to the temple, there will be peace. If there is enmity, it doesn't matter how far the mosque is from the temple, there will be strife."  Doesn't he find the muezzin and namaaz five times a day an invasion, a disturbance? "No, not at all. We do our prayers and rituals at our time, they do theirs at their time. God is not deaf, dumb or blind. The almighty watches and listens at all times. So what does it matter?"

So that's the man who has stepped in now to "mediate". Correction, he is not "mediating", he claims, but that as the religious leader of the Hindu community, he believes he has an exalted and higher status than the self-appointed assorted sants and sadhus; that he is here to direct the VHP to take a particular course, and in case they remain adamantine, surely he always has the option of appealing directly to the Hindu community at large...

Plain Speaking Does The Trick

The process apparently began more than six months ago when the VHP leaders visited Kanchi to brief the acharya about the grand sant sansad decision, taken at the Maha Khumb mela, to start `mandir' construction from March 12.

The Shankaracharya had then just returned from a tour of the north, and told the VHP types that he was distressed to find so many temples in a dilapidated state and nobody seemed to care for them. What was the need for building any more temples when the existing ones could not be looked after? There should be atleast a ten-year freeze on all temples construction, he is supposed to have told them.

He is said to have also enquired  how the VHP types could keep invoking the name of "maryada purushottam Ram'' but adamantly refuse to recognise the jurisdiction of law? Isn't Lord Ram the embodiment of the rule of law?

His good offices were made available, he spelt it out, on the explicit condition that VHP would undertake the requisite commitment over the "court jurisdiction'' formulation.

The powers that be in Delhi thought he would be a useful instrument in breaking the impasse, but then 911 and its attendant distractions cropped up. No more was heard of a possible Kanchi role till the George Fernandes met the Shankaracharya a few weeks ago.

So What Has He Achieved?

Apparently, the acharya has managed to make the VHP give not one but two written undertakings. One, the much publicised one, that the VHP will abide by the court verdict. Seen by many to be a "major climbdown" because, hithertofore, it was being argued that the courts did not have any say in a matter of "faith.''

But what is really significant, it is being claimed, is that the VHP has also given a written undertaking that it would abide by the court judgment even if there were to be an "adverse'' verdict over the `"disputed'' area. In this second written commitment, the VHP has undertaken to provide, "honestly and sincerely, access and right of way in case the final verdict restored the 'disputed'' site to the Muslims."

Once the VHP seemed amenable with the Shankaracharya line, it became possible to make the Muslim leadership consider some kind of a proposal. The PMO also became involved only after the VHP leaders agreed to the idea of a "legal'' framework of the dispute.

Following talks with VHP and other Hindu religious leaders, the pontiff had announced earlier in the day that the Ram Janambhoomi trust and the Sangh parivar outfit have agreed to maintain status quo at the disputed site at Ayodhya but demanded hand over of the "undisputed land" for beginning prayers on March 15.

There is no legal problem for the government to accept the Nyas demand to give the undisputed land to it, the acharya proclaimed. "Government is in the process of consultation with its 21-party alliance," he said. "This piece of undisputed land has no connection with the disputed site as the land was acquired by the Centre one year after December 6, 1992, when Babri Masjid was demolished."

He claimed he had a "written undertaking" from the Nyas, which includes VHP, assuring that no activity would be undertaken on the disputed site.

The acharya said there were "all kinds of cases" on the dispute pending before several courts, including the Supreme Court and Allahabad High Court.

The VHP, he said, would carry out 'bhoomipujan' on March 15 followed by 100-day long religious ceremonies including 'havan' and chanting of religious scriptures.

Asked whether any construction on the undisputed land would hamper the entry into the disputed site, he said "No. All constructions will be done within a boundary wall, keeping a passage for entry and exit". He, however, asserted that "status quo will be maintained at the disputed site".

The problem is not that simple, though, for the dispute, at present, is over what is "disputed".

But stepping into negotiating a matter as complicated and deadlocked as Ayodhya is no walk in the garden. The acharya had a busy day -- separately and collectively he had a series of meetings with Advani, Fernandes, Joshi, Vajpayee, the VHP leaders and the Muslim leadership, rounding it off with a meeting with Prime Minister Atal Bihari Vajpayee to apprise him of his talks with leaders of VHP and All India Muslim Personal Law Board. Defence Minister and NDA Convernor George Fernandes and Home Minister L K Advani were present at the meeting.

The ball has thus been effectively lobbed into the AIMPLB court and much would depend upon the fine-print of the "written undertakings" the acharya claims to have obtained from the VHP.  This is perhaps the first time that a moderate and liberal Hindu functionary has got involved in negotiations involving the vexed issue. Understandably, it carries the risk of his authority and prestige getting tainted.

The Muslim leadership also was uncertain how to deal with this latest development, not knowing whether "his ecclesiastical prestige was also backed by any temporal voices" and agreed to formally meet with the acharya once they were reassured of the involvement of others -- former President, R. Venkataraman, the former Chief Justice of India, Ranganath Misra, and the former Uttar Pradesh Governor, Romesh Bhandari. The AIMPLB was represented by Syed Nizammudin, general secretary, S.Q.R Ilyas, convenor of the AIMPLB committee on Babri Masjid and eight others -- Syed Jalaluddin Umri, Abdul Kareem Parekh, Ahmad Ali Qasmi, Yusuf Hathim Muchala, Mohammed Jafar, Abdul Wahab Khilji, Manzoor Alam and Kamal Farooqui.

Another AIMPLB member, Syed Shahbuddin who called on the acharya separately said, however, that no understanding had been reached. What remains to be seen is the fine-print in the two "written undersandings" and the construction map that the AIMPLB would want to examine in their March 10 meeting.