Since we could not get a full transcript of the controversial speech by Bal Thackeray, we reproduce a literal translation of the report on the speech as it appeared in the Shiv Saina mouthpiece Dopahar Ka Saamna dated Oct 16.
Facebook Twitter Google + Linkedin Whatsapp
Follow Outlook India On 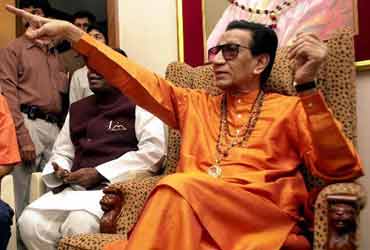 "Yes, Hindustan is a Hindu Rashtra. In front of all you witnesses, I declare this. What is the need for someone's father's permission?" Making this declaration, Shiv Sena Chief Balasaheb Thackeray addressed a massive Dussehra Rally on October 15. In front of the enormous audience, he awoke the spirit of Hindutva. On hearing this, cries of "Jai Bhavani, Jai Shivaji" echoed in the sky.

Using harsh words, he said that I don't want a country of cowards. "Give the army in my hand and then see how I will wipe out those who support Pakistan and unfurl the national flag with self respect."

Starting his speech on a lighter note, the Shiv Sena Chief said that he had tried several times to contact George Bush. "Finally the phone connected. I was asking his permission to go to the rally. Bush asked me "what you want?" I said, "I want your permission". Bush said you can have my permission on one condition: that I get permission to attack Iraq." On hearing this joke, the audience laughed out loud.

In the next instant, the Shiv Sena Chief grew serious and said, "There are so many people present here. On which issue should I speak? Today it has appeared that I am going to make an angry speech. I have no complaint against journalists. I have never said that they should be wary of me. I am not a journalist but a cartoonist. Once a journalist gets after you, they don't leave you alone. If they raise you, they raise you to the skies until you fall. After all they are children of shani (Saturn). If shani helps you, then a man can reach the summit but if he doesn't, then you can be dashed on the floor."

The Shiv Sena Chief said that for the last 36 years, the party has been holding this Dussera rally. "It is because of you that I am at the post of Shiv Sena Chief. I have not forced you people to keep me at this post. Even today, the police has banned us from bursting firecrackers. They have found an excuse in order to prevent displays of excitement. But it is my good fortune that people listen to my speech with so much attention. At the other end, at Sonia Gandhi's rallies, they don't pay attention"

Turning his attention once again to the media, he said, "People keep asking me when are you going to leave the government How are you concerned with this? When it breaks, we will see. But we will not mend it. I had kept the TV people at a distance for a while because they are only involved in trying to find faults."

Referring to the threats to his life by Kashmiri militants just before the rally, the Shiv Sena Chief said sternly, "There is tight police bandobast (arrangement). Human bombs will be targeting me. Many who threatened me have come and gone. I am still here." The Shiv Sena Chief said that the country has never been as weak as it is now and it is a frightening

The Shiv Sena Chief made it a special point to thank the Tamil Nadu chief for banning conversions in the state. "That woman sometimes walk a little crooked but leave her alone. By placing a ban on conversions she has done a brave thing. The Shiv Sena supports her. Men don't show any courage but a woman has been able to do this."

"Musharraf is saying that our that the fight for Kashmir is a fight for independence but our government is thinking of withdrawing the army from the border. Whose stupid idea is this? I wanted to have a talk about this but the prime minister had gone on a foreign tour."

Speaking about the terrorist strike in Akshardham, the Shiv Sena Chief said in a angry voice, "What happened in Akshardham? How many people died. Two of theirs. Those people carried off such a huge attack. The guns were not seen, nor were the hand grenades. They had carried food and water. Uddhav (Thackeray's son) had gone there. When they attacked, the doors of the temple were closed.

In spite of that one bullet of the AK-57 pierced the door and took the life of a priest. They did not even spare women and children. For two people, our commandos were called. They had no escape route and our commandos had no place to hide. Two people had made so much preparation. Decrying this attack,, we closed the whole of Hindustan. The bandh was a total success. For this, I thank Shiv Sainiks. The police also maintained discipline and for this I thank the police. We only have this request. If there is justice, give us justice. But if there is no justice, then don't bother."

Sending a message to prime minister Atal Behari Vajpayee in his own characteristic way, the Shiv Sena Chief said, "Vajpayee asks me why I am annoyed with him. He criticises me. I am not angry with him. Vajpayee raised the BJP. Don't send the army to Pakistan. Our country itself has become a den for terrorists. Look after that. Kick out the four crore illegal Bangladeshi immigrants. Bangladesh has a begum. She has started committing atrocities on Hindus. If a woman can do that there, why can't a man do it?"

"Hindus must awaken. When there was an attack on Devgiri, Sant Eknath raised a cry. Muslims had cut the neck of Ramdev Rai. These people are very dangerous."

"The Christian leader Falwell says something against Islam and Muslims start a riot in Hindustan. There are no riots in Pakistan. Are the Muslims here citizens of the country or more interested in Pakistan? If you are not citizens, then leave the country and go away. Why should they be looked after? What happened in Godhra? Hindus were burnt. The response happened in Ahmedabad. At that time, it looked as if people had awoken. Why shouldn't Hindus get angry? Declare a Hindu Rashtra. No one's father's permission is needed. This is a country of Hindus. Here, the Hindus religion should be respected. We are not saying we will not honour your religion."

Using harsh words, the Shiv Sena Chief said, "Now you should also develop suicide squads. Hindus should also learn how to sacrifice themselves. Nothing is gained simply by getting angry and shouting slogans. My Marathas have the courage to fight.

The Shiv Sena Pramukh Chief called on Hindus to awaken and said, "Hindus are in such a deep sleep that even Kumbhakaran would feel shy. If they continue to sleep like this, then one day there will be no other option left other than dying in their sleep."

Responding to Falwell's apology for his remarks, the Shiv Sena Chief said, "Looking at the way Falwell changed his stance, he should join the BJP. The BJP needs such people. Because what the BJP says today, it changes tomorrow."

Criticising the Democratic Front government in the state, the Shiv Sena Chief said, these people are sly. "The government only has a one-track objective of eating money. We (the Shiv Sena-BJP government) had built the flyovers. But that beggar Krishankar Singh is inaugurating them. The Mumbai-Pune expressway should be named after P.L. Deshpande. I have said this. If it is named after someone else, I will personally take a hammer and break it."

The Shiv Sena Chief said that the Democratic Front government had destroyed the state. To oppose this, the Shiv Sena will launch a massive agitation. "Their sins will be told to the public. In three years, what spark did they kindle? The government says that no darkness in the state will be seen in the next 15 years. Why are they making plans for tomorrow? We need plans for today. If they don't give clothes, that it okay. We will remain naked. But at least give us food, water and electricity. The farmers' crops have been destroyed. The government is not giving the dues for the crops that have been harvested."

Criticising the central government's disinvestment policy, the shiv sena pramukh said, "The Centaur Hotel at Santacruz was sold to the Batra company for Rs 83 crores. Then another party bought it for Rs 120 crores. We do not accept such a disinvestment. There should be a condition that those who buy a company should not be allowed to sell it for at least ten years. What direction is this policy headed in? Any policy obstructing the good of the nation is not acceptable to us. We will not allow anyone to sell the country. We will not allow anyone to touch the country."