The Heat Of The Moment

Climate breakdown is right here, right now: We are ill-equipped, historically and psychologically, to understand it, which is one of the reasons why so many refuse to accept that it is happening.

More from George Monbiot
View All

There are no comparisons to be made. This is not like war or plague or a stockmarket crash. We are ill-equipped, historically and psychologically, to understand it, which is one of the reasons why so many refuse to accept that it is happening.

What we are seeing, here and now, is the transformation of the atmospheric physics of this planet. Three weeks before the likely minimum, the melting of Arctic sea ice has already broken the record set in 2007(1). The daily rate of loss is now 50% higher than it was that year(2). The daily sense of loss – of the world we loved and knew – cannot be quantified so easily. 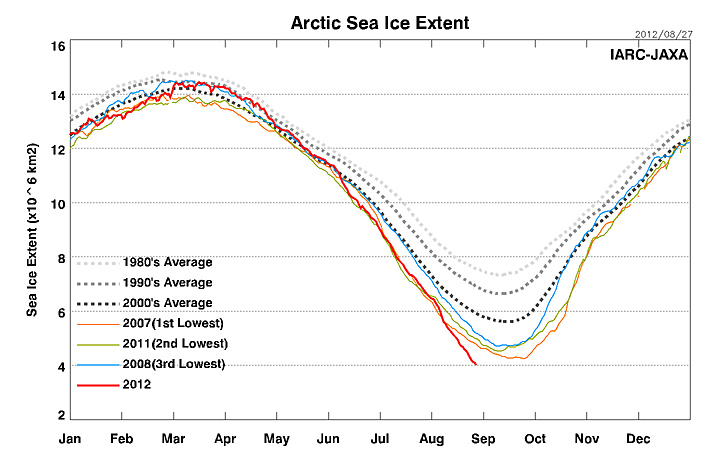 The Arctic has been warming roughly twice as quickly as the rest of the northern hemisphere. This is partly because climate breakdown there is self-perpetuating. As the ice melts, for example, exposing the darker sea beneath, heat which would previously have been reflected back into space is absorbed.

This great dissolution, of ice and certainties, is happening so much faster than most climate scientists predicted that, one seasoned observer reports, “it feels as if everything I’ve learned has become obsolete.”(3) In its last assessment, published in 2007, the Intergovernmental Panel on Climate Change noted that “in some projections, Arctic late-summer sea ice disappears almost entirely by the latter part of the 21st century.”(4) These were the most extreme forecasts in the panel’s range. Some scientists now forecast that the disappearance of Arctic sea ice in late summer could occur in this decade or the next(5,6,7).

As I’ve warned repeatedly, but to little effect, the IPCC’s assessments tend to be conservative. This is unsurprising when you see how many people have to approve them before they are published. There have been a few occasions – such as its estimate of the speed at which glaciers would be lost in the Himalayas – on which the panel has overstated the case. But it looks as if these will be greatly outnumbered by the occasions on which the panel has understated it.

The melting disperses another belief: that the temperate parts of the world – where most of the rich nations are located – will be hit last and least, while the poorer nations will be hit first and worst. New knowledge of the way in which the destruction of the Arctic sea ice affects northern Europe and North America suggests that this is no longer true. A paper published earlier this year in Geophysical Research Letters shows that Arctic warming is likely to be responsible for the extremes now hammering the once-temperate nations(8).

The north polar jet stream is an air current several hundred kilometres wide, travelling eastwards around the hemisphere. It functions as a barrier, separating the cold, wet weather to the north from the warmer, drier weather to the south. Many of the variations in our weather are caused by great travelling meanders – or Rossby waves – in the jet stream.

Arctic heating, the paper shows, both slows the Rossby waves and makes them steeper and wider. Instead of moving on rapidly, the weather gets stuck. Regions to the south of the stalled meander wait for weeks or months for rain; regions to the north (or underneath it) wait for weeks or months for a break from the rain. Instead of a benign succession of sunshine and showers, we get droughts or floods. During the winter a slow, steep meander can connect us directly to the polar weather, dragging severe ice and snow far to the south of its usual range. This mechanism goes a long way towards explaining the shift to sustained – and therefore extreme – weather patterns around the northern hemisphere(9,10).

I have no idea what is coming to Europe and North America this winter and next summer, in the wake of the record ice melt, but it’s unlikely to be pleasant. Please note that this record represents a loss of around 30% of Arctic sea ice, against the long-term average. When that climbs to 50 or 70 or 90%, the impacts are likely to be worse.

Our governments do nothing. Having abandoned any pretence of responding to the environmental crisis during the earth summit in June, now they stare stupidly as the ice on which we stand dissolves. Nothing – or worse than nothing. Their one unequivocal response to the melting has been to facilitate the capture of the oil and fish it exposes.

The companies which caused this disaster are scrambling to profit from it. On Sunday, Shell requested an extension to its exploratory drilling period in the Chukchi Sea, off the north-west coast of Alaska(11). This would push its operations hard against the moment when the ice re-forms and any spills they cause are locked in. The Russian oil company Gazprom is using the great melt to try to drill in the Pechora Sea, north-east of Murmansk. After turning its Arctic lands in the Komi Republic into the Niger Delta of the north (repeated oil spills are left unremediated in the tundra)(12), Russia wants to extend this industry into one of the world’s most fragile ecosystems, where ice, storms and darkness make decontamination almost impossible.

As I write, activists from Greenpeace, whom I regard as heroes, are chained to Gazprom’s supply vessel, preventing the rig from operating(13). These people are stepping in where all governments have failed. David Cameron, who still claims to lead the greenest government ever, is no longer hugging huskies. In June he struck an agreement with the Norwegian prime minister “to enable sustainable development of Arctic energy.”(14) Sustainable development, of course, means drilling for oil.

Is this how our children will see it: that we destroyed the benign conditions which made our world of wonders possible, then used the opportunity to amplify the damage? All of us, of course, can claim to have acted with other aims in mind, or not to have acted at all, as the other immediacies of life seemed more important. But – unless we respond at last – the results follow as surely as if we had sought to engineer them.

Stupidity, greed, passivity? Just as comparisons evaporate, so do these words. The ice, that solid platform on which, we now discover, so much rested, melts into air. Our pretensions to peace, prosperity and progress are likely to follow. “And like the baseless fabric of this vision, / The cloud-capp’d towers, the gorgeous palaces, / The solemn temples, the great globe itself, / Ye all which it inherit, shall dissolve.”

Published in the Guardian. Courtesy: www.monbiot.com

9. Some of the extremes and their attribution are documented here: