'The 'Feel Good' Is Genuine'

Apart from the merger of the DA with basic pay for the central government employees, argues the vocal former CII President, the sops are mixing good economics with politics. But, he admits, the government is trying to take political mileage by spendi 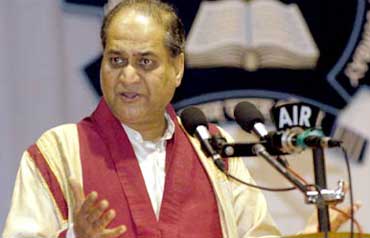 The full script of the BBC Hindi Special Programme Aapki Baat BBC Ke Saath with the Chiarman and Managing Director of Bajaj Auto, the former CII President. The topic of the programme was - would India be able to maintain its economic and industrial growth rate?

BBC : Would India be able to maintain its present rate of economic and industrial growth ?

BBC Listener from Gwalior : There is no doubt that economic development has taken place in India over the years, but what hampers this and other positive things is the deep rooted political corruption, in which industrialists like you play an important role -  you make, break and manipulate governments. What are the views of a vocal person like you ?

Now how does corruption thrive? It is very easy to say that the big industrialists are neck-deep in corruption, this is the point I would like to confront and contradict.  It is a total lie that big industrialists can have a government of their choice in place by throwing money. I do not think that there are many industrial houses which have so much money and power that they could influence any government. Maybe, one or two - once again, I am using the word maybe – but certainly not many, as is commonly said. In my long business career I have never seen Tatas and Birlas trying to influence any government.

Corruption is quid pro quo.  These days things like struggling for licenses etc., has gone down, but many serious problems are still there. For a common man it used to begin with things like a telephone connection, when the monopoly of public sector was there. With the entry of private sector, things have improved -- but yes, corruption is still a big problem.

I can say for myself that I have never generated cash for anyone nor have I given any political fund to anyone.

BBC listener from Jaipur : Well if the well-being of economy depends on natural factors such as good rains, i.e. a good monsoon, are the impressive growth rate statistics not very brittle? Secondly the Asian Development Back (ADB) has expressed concern at the poor rate of employment in India, what do you say ?

Rahul Bajaj : It is a fact that the Indian economy is very largely dependant on factors such as the monsoon for its well-being, other things being equal, as compared to the American and the British economy. So if there is a good monsoon, the growth rate figures are good; on the contrary if rains fail, India suffers. What is required to be done is more and more irrigation, and also preservation of water through dams and canals.

Secondly, for a strong economy, what India needs is a long term measure as sound infrastructure. The beginning for which has been made by Prime Minister Vajpayee with his plan of a ‘Golden Quadrilateral’, and also, in the long term, measures such as the inter linking of rivers, the work for which is being done by Mr Suresh Prabhu --  this would also take about ten years.

But by resorting to these solid measures could India’s dependence on monsoon come down?  Therefore, I would put a question mark on those who say that India would maintain a growth rate of about 8-9 percent for the next four-five years.

BBC listener from Gandhinagar : Let us focus on the automobile industry only to see how the economy is faring. Your own company Bajaj Auto, has stopped the manufacture of Bajaj Super model. Why? And also now why are you concentrating on motor-cycles instead of traditional scooters ?

Rahul Bajaj : Bajaj Auto is ready to once again start the manufacture of any model, which the customers want. Our god is the customer, we make what they want, and the fact is that today there is a greater demand for the motor-cycles in the Indian market.

BBC : But why has the demand of scooter in Indian market gone down ?

Rahul Bajaj : There are many reasons. Five years back, we used to manufacture seventy thousand scooters a month; now it has gone down to twenty thousand. On the other hand, during the same period, the sale of the motor-cycles has gone up from ten thousand a month to eighty thousand.

The reasons are many, one of them is the increase in the purchasing power of the middle class and the upper middle class. Now the middle class teenagers want to be macho and prefer their girlfriends sitting at the back of a motorcycle and driving it at a high speed.

Also, what has happened is that price difference between a scooter and a motorcycle has narrowed down considerably. Earlier the scooter was quite cheaper in comparison to a motorcycle. Now the motorcycles at the entry level, like the Bike and Buxar of our company and Don of our competitor, are now priced almost equal to that of a scooter. Fuel economy is also a factor which goes in the favour of the motorcycle.

BBC listener from Vishakhapatnam : The economic growth rate projection figures at the moment look good, but are they realistic and would they last? Are these only for the big business or also for the common man, and despite these figures, India remains at number three in Asia?

Rahul Bajaj : The figures are realistic there is no doubt about it. I know that the people of the country take such figures with a pinch of salt, but they can’t be wrong as much research is done by the Central Statistical Organisation (CSO) on these. No government can afford to give wrong figures now --  if it does, and then different figures come out, they would be in a real embarrassing situation, so it is not easy to fudge figures.

What can be criticised is that the government of the day is trying to take political mileage projecting these impressive figures as its achievement. It is spending crores of rupees in what is being called the ‘India shining’ campaign. This is a political move aimed at the elections, you are right there.

BBC : But Mr Bajaj why are such things as growth rate figures and schemes like the Kisan Credit Card brought out only in the election year? Is this not mixing of economy and politics ?

Rahul Bajaj : See, if one individual politician was giving the figures it would have been a different thing, but these figures are of the RBI, CSO – so there should not be a doubt, yes inaccuracy could be there, but that is a different thing.

Now about the election sops, it is being said that these populist measures are only shortlived and are being done with an eye on the vote bank, it could be there I do not deny this. But what we should see is whether the announcements are in the interest of the country or not. If they are let us welcome them, on the other hand, if they are not, then let us criticise them.

If you ask me about the announcements during the last two months, I think broadly they are in the interest of the nation, except the merger of the DA with basic pay for the central government employees.

BBC listener from Delhi : How can we say there is a ‘feel good factor’ when problems like poverty and corruption are still menacingly there ?

Rahul Bajaj : See the ‘feel good factor’ is related to industrial growth, economic development and to an extent to the stock market. Corruption has been there for 40-50 years, and it is a matter of shame for all of us. But then who is responsible for this menace? We ourselves! Why do we vote for corrupt candidates and criminals? We should take the initiative ourselves and encourage others to fight corruption.

BBC listener from Raipur : Employees whether in public or private sector are facing the regular threat of retrenchment and salary cuts, thereby reducing the purchasing power of the common man. Without this, how can there be stability in the market?

Therefore if the organised sector were to only increase employment, it would not survive – it has to expand in new areas and with it would come the employment.  Bear in mind that India has one of the tightest corporate governance laws, I would go to the extent of saying we are overdoing it.

BBC listener from Bihar : Why are the Indian companies unable to compete at the world level? What should be done for improvement?

Rahul Bajaj : For that a change in labour laws and a solid infrastructure is required. But on the other hand, look at the other side of the coin. Many foreign companies came to India, some went back, some closed down, some of them have been successful, but none have troubled the Indian industry. For example look at automobile sector – companies such as Honda, Suzuki, Yamaha, Vespa – all of them came to India. Some of them are doing well, but the Indian Bajaj has performed better than all of them.

Similarly, look at Tatas in cars – their product is better than many foreign cars. The Indian companies have not fared badly in competition. Where we have done badly, is that these foreign companies can directly import from places such as China and other places. These have had an adverse impact on small scale industry of India.

BBC : But Mr Bajaj, you were the most vocal critic of import of scooters from China, did it help? Because the import did not take place?

Rahul Bajaj : It was neither beneficial or destructive. Our opposition was that the Chinese product was not WTO compliant. Today also we need not be afraid of China, if it is WTO compliant. India is a founder member of WTO, whereas China became a member only two years back. Till then we did not know what subsidies and benefits they were getting, so why should we compete with them?

Remember, the price of two-wheelers can only come down anywhere in the world by competition. This is the only guru mantra for bringing down the prices. If there is monopoly there would be high prices, but introduce competition in every sector and you would see a decline in prices.