Former Pakistan skipper Intikhab Alam blames the ICC for triggering off the crisis by backing Mike Denness even if he seemed to be blatantly unfair and partisan. 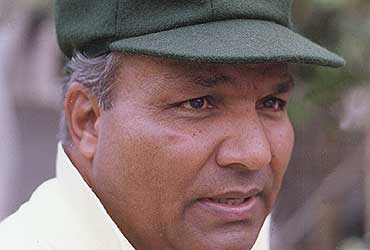 Intikhab Alam played the game at the highest level in the '60s and '70s for Pakistan and for Surrey in county cricket. The former captain of Pakistan (1969-75) was a much celebrated coach and manager for the better of the '80s and '90s. The high point of his managerial stints were the '92 World Cup triumph, and the series wins against England on their soil in 1992 and 1996.

How do you maintain the consistency of rulings across match referees? The same test match in which Sachin Tendulkar was accused of ball tampering, Jacques Kallis, on the last day,  was also seen cleaning the ball without asking the umpire. On the same day, in the Australia-New Zealand test, Craig Macmillan was caught on TV doing the same. Let alone punished, neither was even warned.

One cannot deny it that there've been cases of double standards, and aplenty. I can say without any fear of contradiction that with an odd exception or two, most referees have used their discretion while ruling on incidents and there has been more than a bit of diversity.

I mean it was upto them to be lenient or strict. That they were acting according to who was involved, and not exactly following the merit and demands of justice in each case. I have seen it happening since 1992, on our tour of England. Each incident has left a bad taste in the mouth.

Anyway, this whole saga involving Mike Denness and the six Indian players, and subsequently the Indian and South African boards and the ICC could have easily been avoided. Denness went too far, on all counts. No way can picking the seam can be called tampering with the condition of the ball.

As regards excessive appealing, first there should be a stern message, 'Cut it out'. It is irrelevant who does it, the umpires or the referee. And, trust me, that would have been the end of it. You cannot penalise half a team on such charges, and at the same time ignore the other side's transgressions.

Firstly, had Denness not gone overboard, there would've been no problem. Had the ICC later acted with calm authority and not turned it into a clash of egos, the issue could still have been resolved much more amicably. At a personal level, I believe that the system of refereeing should be so aboveboard that it is not challenged by anybody. It can only happen when it is fair and unbiased.

Should there be a right of appeal against the match referee's decision? Cricketers seem to have no right of appeal at any level. Do we need a mechanism for appeal, and if so, how should it work?

Sticking to the issue at hand, the problem started when the ICC decided to back its appointee even if he seemed to be blatantly unfair and partisan. Even if there was no system of appeal at this particular point in time, the ICC should have acted judiciously and not emotionally.

To me, this whole system of referees is flawed. Geoff Boycott has rightly called it a paid holiday for those close to the boards and the ICC. It's nothing more than an old boys' network. Even if it was not, it is not the job of a match referee to issue reprimands, bans and fines on his own. His job is to adjudicate, and sort out the case presented to him. But lately we see that referees are acting as judge, jury and executioner. That too without any uniformity and evenhandedness.

Coming to your question. Yes, there should be a mechanism for appeal, after ensuring that redress is sought only in grave cases. But anyone who feels wronged should be allowed to appeal; that is the demand of natural justice as well.

Shouldn't the match referee be allowed (or forced) to explain his decisions? Isn't this basic right to information being denied to the players and the public?

If you ask me personally, referees are taking themselves too importantly. That explains the strutting and throwing their weight around. To me, a referee is a judge, and the judge's job is to provide relief to the wronged and admonish the wrongdoer.

It was supposed to be a benign system, much needed to cut out the rowdiness and to make the game smooth and presentable. What we are seeing is entirely different -- the referees themselves are acting injudiciously and creating conflagration.

I believe that the entire system has to be rethought, and yes, the referees should not be given immunity to explain as to how they reached a particular decision. So that if they chose to make laughable and biased decisions, they are made accountable at least to the media and public.

Do you feel important ICC decisions be taken by the president alone or through proper consultations? As Boycott said on TV, the decision to term the third Test unofficial is wrongly being called the ICC's decision, it is actually one man's decision, Malcolm Gray's. Should not the ICC's technical committee, which looks after discipline and rules issues, been consulted?

I think that any decision which is of serious a nature as withdrawal of Test status should have unanimity and consensus, of the boards and the ICC committees involved. That is how you ensure transparency.

Should all decisions involving cricketing rules be decided by simple majority in the ICC? If in the next ICC executive board meeting on March 16, Jagmohan Dalmiya forces a vote on the third test, gets a majority to vote for him and turns it into an official one, do you feel it is the correct way to do it?

I suppose the ICC meetings are not mere goodwill affairs, but meant to decide critical issues. This split between the ICC and at least two member boards, with others taking sides, is most crucial since Kerry Packer. The very authority of the highest cricketing establishment has been challenged.

It is important that all issues, and not just the status of the third Test between South Africa and India, are decided democratically. Ideally, it should be consensus, with everybody thinking and acting the same way. But if that is not possible, the majority should be allowed to hold sway, with those voted out taking it with grace.

How can this crisis make cricket a fairer and better game?

This crisis was the last thing cricket needed right now. What is worse it has exposed the ICC as a body lagging far behind in terms of resolving serious issues quickly and judiciously. The fallout has been tremendous, and if the ICC has to recover from this, it would have to resolve be a more judicious and fair body.

In the context of BCCI and the Indian cricketers, the viewpoint all around, as far as I gather, is that they were wronged. In this environment, I sincerely hope that the Indians do decide to carry on with the game and not prolong the issue. Even if they allow the ICC high-handedness by not playing Sehwag at Mohali, they stand to lose nothing.

Do you think that the game is being divided along racial lines?

I sincerely hope that doesn't happen. But that feeling is there, and it is really very sad. Injustice cannot continue for too long without any repercussions. All those who have been associated with the management of this fair game have to sit down with a cool head and think how it came to that.