The Fabric Of The Future

The decentralized nature of handloom production and its non-polluting effects on the environment make it a preferred sector in the future. But... 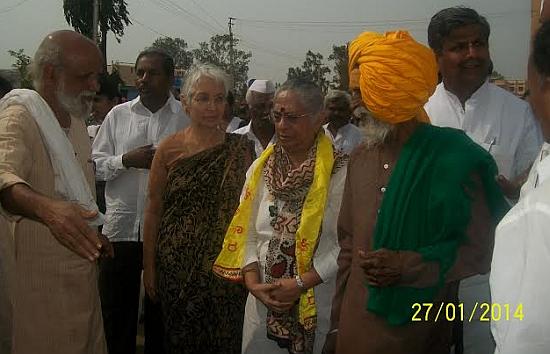 In the modern imagination, the handloom tends to appear as an object of melancholy or as a soon-to-pass relic. The figure of the weaver disappears in discussions of economic reforms that rage between the binaries of agriculture and industry, of the farmer and the industrialist. The second biggest source of employment in rural India, next only to agriculture, the handloom sector engages 44 lakh Indians at present. Diverse communities—tribals, lower castes, Dalits, Brahmins, Muslims, and Christians—work in this sector.

Prasanna, the theatre director and founder of Charaka, a women’s handloom co-operative based in Heggodu, Karnataka, recently concluded a month-long satyagraha that asked the state government to redress the problems facing weavers. His efforts were part of the countrywide struggle that the All India Federation of Handloom Organisations (AIFHO), which includes the Crafts Council of India, Dastkar Andhra, Decentralized Cotton Yarn Trust and Rashtra Chenetha Jana Samakhya, launched on January 1.

The immediate provocation for the AIFHO’s protest was a proposed legislation that effectively undid the distinction between the handloom and the powerloom. It wished to redefine handloom to include “any hybrid loom on which at least one process for weaving requires manual intervention or human energy for production.” Redefined this way, the powerloom sector can easily enlist manual labour in one part of the production process, get classified as handloom and then corner the policy benefits meant for the traditional weavers. In response to AIHFO’s protest, the government dropped its proposed legislation on January 9, but not before giving us a glimpse of the workings of the powerloom lobby.

Following Independence, the government of India put in place many safeguards— mostly out of regard for the Gandhian legacy of valuing Khadi and for the employment potential of the handloom sector— to shield traditional weavers from the powerloom sector .The Handlooms (Reservation of Articles for Production) Act, 1985, which aimed at “protecting the livelihoods of handloom weavers and protecting the cultural heritage of the handloom industry from encroachment by the powerloom and mill sectors,” set aside 22 traditional cloth items such as sarees with borders, dhoti, lungi, among others, for exclusive handloom production and put them out of reach of the powerloom sector.

When this Act did come into effect after eight long years in 1993, following a protracted litigation initiated by the powerloom sector, the reserved list included only 11 items. Even then, the Act’s implementation has been so poor that 70% of the goods sold as handloom and Khadi today are actually made by the powerloom. The offenders even introduce little weaving “defects” to make their products look authentically handloom! The mechanized looms, which produce cloth on a bigger scale at lower costs, force weavers to push down their prices to stay competitive. The activists have long wanted this blatant crime to be checked.

Further, the government strives to get traditional weavers to shift to powerloom through financial incentives. Another demand of the satyagrahis was that the government abandons such efforts and focuses instead on curbing the powerloom sector’s spurious handloom.

In a letter to the Prime Minister last December, Prasanna and his fellow activists clarify: “Powerloom workers are brothers and sisters of handloom weavers. We do not want them to suffer destitution.” They urge that the weavers, whom the government helped shift to the powerloom, be enlisted to produce the state’s own cloth requirements in its schools, railways, hospitals and buses, among others.

In mid-January, Prasanna undertook a 254 km padayatra— which was termed Banashankari yatra after the weavers’ deity in the state— across three North Karnataka districts with dense weaver presence. The yatra drew wide support from weavers, writers, farmers’ activists and environmentalists in the state. In a welcome show of regard, the Karnataka government agreed to honour all his demands after Prasanna and his supporters began a hunger fast.

While the government provides financial and other institutional safeguards, its failure in implementation is of tragic proportions. The number of people in the weaving sector, which stood at 65 lakhs in 1995, has declined by one-third since. Many locally distinct kinds of sarees and blankets have disappeared.

Still, Prasanna views handloom as a fabric of the future. The decentralized nature of handloom production and its non-polluting effects on the environment, he argues, will make it a preferred sector in the future. The dangers of synthetic cloth manufacture are all too apparent. His engagements with the aesthetics and ethics of manual labour, the modes of ending machine dependence, and the acceptable forms of urban-rural relation at Charaka, the hugely successful handloom co-operative he founded in 1994, ground his conviction. For him, the weavers are not to be viewed as an endangered community in need of charitable succour from the better-off in society. The ever-growing popularity of handloom cloth outstrips what the weavers are able to produce. The struggle therefore is to sustain institutional conditions that let them work with confidence and dignity. The consumers are also part of the struggle, as individuals with a duty towards the weavers and a right to authentic handloom.

The pain and suffering of the weaving communities are invisible in mainstream media. India’s diversity is nourished to a great extent by the dazzling variety of weaving traditions. Seeing this sector go is to see the death of a great occupational tradition and its diverse cultural worlds. Twenty four lakh handlooms of an astonishing regional variety are still functioning in the country. Prasanna notes that India has more handlooms than the rest of the world put together. If we wish to see our handlooms in museums, he adds, we can continue to be indifferent.