The Day That Changed Cricket

It started on that day, the 25th of June in 1983. Cricket's home, over the next two decades, shifted to India, for good or bad. The boom never ended... 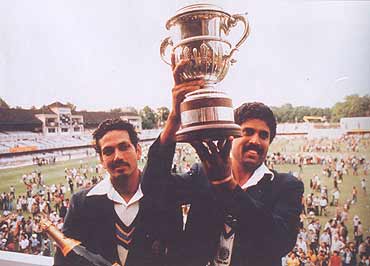 The year 1983 got impressed into Indian consciousness like no else -- we had been champions before, most notably in hockey. In 1983, India were the Olympic hockey champions, in fact. But that gold was devalued by the US-led boycott of the Moscow Games and hockey's star was clearly on the wane.

Yet, 12 years after the truly epochal wins over West Indies and England in 1971, India were no-hopers. Their celebrated spinners were finished. The man who led the bowling, Kapil Dev, was a solitary reaper of the opponent wickets. They had just been thrashed by Pakistan and the West Indies.

There were questions over Kapil's future as captain; the team that landed in England for the 1983 Prudential World Cup was a non-starter, as conventional wisdom suggested.

Conversely, the team's only hope to gain honours in world cricket lay in One-day cricket -- Kapil could not take 20 wickets in a Test match, after all, but the relative frenzy of One-day cricket could reward a string of good performances. There would be no draws. It would be all or nothing. In the two previous World Cups, it had been nothing for India -- except for a win over East Africa.

Now, though, something seemed to fall into place -- call it destiny or the unfathomable nature of sporting karma. Or just one-in-a-million possibility of several little episodes falling into harmony to make a decisive whole.

India found more than one match-winner, bits-and-pieces men who found the wickets to their liking. Someone was always there to deliver, with bat or ball. At crucial moments, the opponents did not -- or were not allowed to -- play their best game. Kapil Dev's leadership proved inspired and inspirational. The rest, as someone said with remarkable insight, was history. History was remade, more tellingly off the field. The West Indies never won the World Cup again. That was Indian cricket's zenith in World Cup; self-assurance was born of it, as also the boom in Indian cricket.

Cricket's home, over the next two decades, shifted to India, for good or bad. The boom never ended. It started on that day, the 25th of June in 1983.