The Clock Is Ticking

Sachin Tendulkar seemingly exists in a time warp, but he's not getting any younger. Time to watch him more closely. 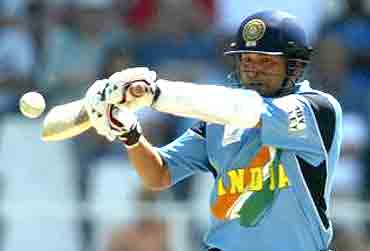 I am a huge sports fan, the kind who spends a good many waking hours in pursuit of this obsession. Much as it sounds like my life revolves just around sport, it doesn’t. Since the two statements sound contradictory, to strengthen my case, here’s an unwritten rule of personal choice: friends first, then sports. Occasionally (and let me emphasise for good measure, just occasionally), I transgress, with a little bit of guilt and the wish that I could be at two places at the same time.

This was a special moment, one I had been wishing for since the time the hint was dropped, and then waited impatiently for it to unravel. Finally, the day was here. It was the day Michael Jordan would return to the NBA for his third innings, after a gap of three years, at a seemingly pensionable age of 38, with a struggling team in the Washington Wizards.

Around a year-and-a-half have gone by since Jordan’s return to the grand stage. During this time, I have watched every Wizards game screened (which is not too many if you stay in India, where the norm is one NBA game a week during the regular season), and caught more glimpses on highlight packages.

Regardless of whether Jordan is nailing the jumpers or hitting the backboard, whether the Wizards are winning close or getting royally mauled, I want to catch every moment of his on court. For pretty soon, this champion athlete won’t be running the floor, wearing the number 23 Wizards jersey. There won’t be a tall, handsome, smiling man hitting sublime turnaround jumpers between ferociously working on his gum or firing verbal bursts.

Fans in basketball arenas across the US have appreciated the peerless Jordan for years, and now they are rolling out the red carpet to bid him adieu. Now that it’s clear that the Jordan show is on its last leg and that there will definitely be no more comebacks, standing ovations, mementos and parting gifts are being generously doled out. Each time, Jordan takes a shot or steps to the free throw line, a host of flashbulbs go off in the background, a bit like the effect American soldiers are rustling up in Iraq, without the ‘collateral damage’.

Soon, Jordan will slip out of his game uniform, slip into a sharp suit and into the Wizards back office. But unlike the last time, I won’t have regrets, for I’ve seen it all. Basketball without Jordan was a possibility I had never considered when he called it quits in 1998, right after leading the Chicago Bulls to their third straight championship. He was then, even at 35, the league’s hottest player, the fulcrum of a team designed to fit around him.

Going too late is one thing, but here he was going away too early. Because it came out of the blue, his absence rankled and left a void. There were memories, a lot of memories -- but also some regret that I hadn’t watched every Jordan game as if it were his last.

A somewhat similar thought for another champion athlete has been swirling in my mind. In less than a month’s time (April 24, to be exact), Sachin Tendulkar will turn 30. Sure, there’ll probably be plenty of ballyhoo about it in the media, to the point of making it an obscene expression of adulation. Sure, it’ll be another occasion to revisit -- yet again -- the little man’s contribution to the game of cricket and his amazing knack to bind a diverse nation, but I’m thinking something else.

Chronologically speaking, Tendulkar will probably start playing (or has he already started?) his second innings at the highest level. And that is, at some level, a heartbreaking thought.

Unlike artistes and professionals in most other spheres of life, age is a factor for athletes. For modern-day cricketers, as well as for athletes in many other sporting disciplines, the fourth decade is the best and the worst.

Nearing 30, cricketers are at their prime, having found meaningful outlets to fully express their cricketing talent and guided by an extremely useful reservoir of maturity and experience. But as the years tick on, age starts to retard their playing abilities, which slowly trickles down to the mind as well, and raises uncomfortable questions. It becomes a time for introspection, a time to reflect on one’s playing skills and priorities in life. Typically, while bowlers have been seen to slip into a decline at 32-35, batters stay at the wicket longer.

Tendulkar is special, blessed as he is with extraordinary talent and, more importantly, driven by a disciplined work ethic and a seemingly insatiable appetite to play cricket. For those reasons alone, if he wanted to, he could play longer than the average player. But make no mistake, the hands of time will catch up with Tendulkar too, and one day he will slip into the record books for good.

And though, the dreaded day might still be years away, it’s nearing all the time. Since I don’t want this to go the Jordan way, I have decided to watch Tendulkar more closely than ever.

The last time I made a note like this to myself was on February 27, 2001 -- the only time I saw Tendulkar in flesh and blood. For a different reason. It was the morning of the first Test match of that thrilling home series against Australia, and there was an enormous piece of symbolism attached to the occasion: Sir Donald Bradman had died the previous day.

As the two teams lined up at Mumbai’s Wankhede Stadium for a minute’s silence, black armbands tagged on their shirtsleeves, I narrowed my gaze to the man who was, and still is, widely regarded as the batsman closest to matching the great Don.

Something in my head told me that, during that homage, the baton was being passed, and that Tendulkar was game for the honour and the challenge. There were the indomitable Aussies, lined up in their baggy greens, looking to stretch their 15-match winning streak in Tests.

Wankhede was Tendulkar’s den, where he could do no wrong. The little man had long lived under the shadow of being a great player in a losing team, and he wanted to set the record straight.

During the course of the Test, watching Tendulkar bat at the nets and in the middle, the conviction grew that Tendulkar had upped his game. Tendulkar scored two half-centuries. More than the runs, though, it was the fierce desire and determined manner in which he scored those runs that left an indelible impression on the mind. He looked the only Indian capable of taking it to McGrath and Co.

Just when he and Dravid were taking the game away from the Aussies in the second innings, a freakish dismissal accounted for Tendulkar. A rasping short-arm pull of his ricocheted off Justin Langer, and was scooped up brilliantly by a diving Ponting at mid-wicket. The other Indian batters caved in. Instead of giving Australia around 250 to chase, which could have been a tricky target on a dusty, turning track, the Indians gave them just 47. How many times has that been the story?

The harsh truth is this: for a batsman of Tendulkar’s stature, his cupboard is incredibly devoid of worthy team accomplishments, despite doing more than his bit for the cause. Jordan has been a member of six championship-winning teams. Bradman captained the 1948 Invincibles and was part of some extremely successful Australian sides. In Tendulkar’s case, a World Cup runners-up salver is stacked alongside some silverware from Sharjah and numerous other man-of-the-match awards.

The most prolific run-getter in the history of the game needs some team achievements against his name, like some overseas series wins against credible opposition and notable one-day championships. Just as well that, as he turns 30, Tendulkar is part of the best and most spirited one-day unit this country has ever produced, most of whom are automatic selections in the Test team.

It’s a young team, fuelled by a sense of urgency and a deep desire to make a mark. The recent run of one-day successes have raised them a couple of notches in the pecking order and given them momentum, which they would do well to carry into the longer version of the game as well. One of the implicit gains for India from the World Cup has been the unshackling of Tendulkar the batsman.

These are exciting times for Indian cricket. The next real test for this team will come when they travel Down Under at the end of the year. It’s the kind of challenge the little genius lives for. I’ll be watching, with rapt attention, occasionally (just occasionally) while saying pass to other pursuits of pleasure.

I must place on record my complete and utter denial of those expert semioticist readings of my article on Ian Thorpe (That Sinking Feeling), which took the first few lines to be a cunningly underplayed method of disseminating a revolutionary scientific theory. The fact of the matter is that I just goofed up. The shark is indeed not a mammal. The shark is not a mammal. [We regret that the error escaped our attention too, and to atone for our sins, we have deleted the extra 98 times Avinash typed the last sentence. Knowing him to be conscientious and sincere, we know that he did not simply cut and paste. – Ed]