What began with a Danish newspaper reporting that it was difficult to find an illustrator for a book about the life of Prophet Mohammad becomes a world-wide protest with the publication of 12 cartoons way back last September. 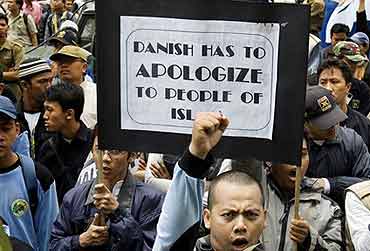 17 Sept, 2005: Politiken, a Danish newspaper, reports that Kaare Bluitgen, a writer, cannot find an illustrator for a book about the life of Prophet Mohammad, because artists fear reprisals from Islamic extremists

30 Sept, 2005: In response, Jyllands-Posten, a right of centre Danish newspaper, asks artists to draw Prophet Mohammad as they imagine him and publishes 12 cartoons. There are two more provocative ones: one shows the Prophet wearing a headdress shaped as a bomb with a burning fuse, while another shows him saying that paradise was running short of virgins for suicide bombers.

14 Oct, 2005: Up to 5,000 people stage a protest outside the offices of Jyllands-Posten, saying that the very depiction of the Prophet is not allowed in Islam.

[As per the holy Quran, there is no specific, or explicit ban on images of Allah or the Prophet Mohammad - be they carved, painted or drawn. Chapter 42, verse 11 of the Quran says: "[Allah is] the originator of the heavens and the earth... [there is] nothing like a likeness of Him." Chapter 21, verses 52-54 says, "[Abraham] said to his father and his people: 'What are these images to whose worship you cleave?' They said: 'We found our fathers worshipping them.' He said: 'Certainly you have been, you and your fathers, in manifest error.'". But it is Hadith, the traditions, which explicitly prohibits images of Allah, Mohammad and all the major prophets of the Christian and Jewish traditions.

Scholars of Islamic Studies point out that there exist many manuscripts with sumptuous paintings showing the Prophet. In these his imagined face is sometimes shown in full, but more often it is either veiled, featureless, or covered by a glowing halo. Needless to say, the paintings were done by Muslims and for Muslims, though not for the general use, like so much else in those long ago days. Depictions by others, generally showing the Prophet in unflattering light, and found highly objectionable by Muslims, do exist in reputed libraries and museums.]

19 Oct, 2005: Ambassadors from ten Muslim countries request a meeting with Anders Fogh Rasmussen, the Danish Prime Minister, over the cartoons. He refuses to meet them. Jyllands-Posten reports that two illustrators who produced the cartoons have received death threats.

29 Oct, 2005: Arab foreign ministers meeting at the Arab League conference in Cairo condemns the he Danish government for failing to act against the newspaper.

November-December 2005: A delegation from Danish Islamic groups visits the Middle East to publicise the controversy over the cartoons. Rumours circulate and additional images, not originally published in Jyllands-Posten, are attributed to the newspaper. Egyptian foreign minister Ahmed Aboul Gheit raises the issue at various international meetings.

26 Jan, 2006: Saudi Arabia recalls its ambassador for his "failure to deal with the insults to the Prophet" and initiates boycott of Danish goods.

27 Jan, 2006: Thousands denounce the cartoons during Friday prayers in Iraq

28 Jan, 2006: The Denmark-based Arla Dairy Group places advertisements in Middle Eastern newspapers pleading against the boycott of its products.

29 Jan, 2006: Jyllands-Posten prints a statement in Arabic saying the drawings were published in line with freedom of expression and is not a campaign against Islam. Palestinians burn Danish flags and Libya announces it would close its embassy in Denmark. Danes are told to be vigilant in the Middle East

30 Jan, 2006: EU says it would take action under the World Trade Organisation if the boycott persists. Masked gunmen storm EU office in Gaza. The Organization of Islamic Countries (OIC) announces it would use the "conflict" as grounds for asking the UN General Assembly to pass a resolution forbidding attacks on religious faith.

30 Jan, 2006: Jyllands-Posten apologises for causing offence to Muslims, but maintains it was legal under Danish law to print them.

31 Jan 2006: Danish imams accept statements from Jyllands-Posten and the Prime Minister, say they are surprised at the extent of the protests. Saudi hospitals refuse to buy Danish insulin. Denmark ask its citizens to avoid traveling to Saudi Arabia and warns, "Danes who choose to stay in Saudi Arabia should show extraordinarily high watchfulness".

31 Jan 2006: Ministers from 17 Arab countries meeting in Tunis issue a joint statement asking the Danish government to firmly punish "the authors of these offences".

31 Jan, 2006: Danish-Swedish dairy giant Arla Foods says its sales in the Middle East have plummeted to zero and it is retrenching 100 employees because of the fall in demand.

1 Feb, 2006: Seven newspapers in Germany, Italy, Spain, Netherlands publish one or more of the cartoons. France Soir publishes all 12 and a new cartoon of its own, to show that "religious dogma" had no place in a secular society. Its editor, Jacques Lefranc, is later fired by the newspaper's French-Egyptian owner Raymond Lakah. Syria withdraws ambassador to Denmark.

2 Feb 2006: Gunmen repeat protests in Gaza. Rasmussen, the Danish PM, appears on Al-Arabiya, a Saudi news network, to try and calm the situation. The Jordanian newspaper Al-Shihan prints the drawings with a list of Danish products. Its editor is sacked, and ordered to apologise. EU Trade Commissioner Peter Mandelson while demanding the boycott must end, criticizes the European papers for "throwing petrol onto the flames of the original issue and the original offence that was taken".

2 Feb 2006: A German citizen is briefly kidnapped and later freed from a hotel in the West Bank city of Nablus

3 Feb, 2006: The International Association of Muslim Scholars calls for a "day of anger" across the world. 50,000 protest in Gaza. Muslims outside the Danish Embassy in London call for execution of those who insult Islam. El Pais, Spain's leading newspaper, reprints a drawing, which shows the prophet made of words saying: "I must not draw Mohammad" French newspaper Liberation, while publishing two of the cartoons as "exhibits in the case", describes them as "mediocre".

3 Feb, 2006: The Danish Prime Minister says "A Danish government can never apologise on behalf of a free and independent newspaper. This is basically a dispute between some Muslims and a newspaper."

3 Feb, 2006: Protesters in Indonesia stage a demonstration inside the lobby of a building in which the Danish embassy is based.

3 Feb, 2006: Christian Association of Nigeria condemns the publication of cartoons

3 Feb, 2006: South Africa's The Mail and Guardian publishes one of the cartoons on its international news page, to illustrate a story about last week's protests. Its editor Ferial Haffajee, receives abusive letters and text messages. Muslim organisation Jamiatul Ulema of Transvaal, a body of mainly South African Indian Muslim priests, win a court interdict stopping the Sunday Times from publishing the cartoons.

3 Feb, 2006: US Department of State's Spokesman Sean McCormack says: "Our response is to say that while we certainly don't agree with, support, or in some cases, we condemn the views that are aired in public that are published in media organizations around the world, we, at the same time, defend the right of those individuals to express their views. For us, freedom of expression is at the core of our democracy and it is something that we have shed blood and treasure around the world to defend and we will continue to do so. That said, there are other aspects to democracy, our democracy -- democracies around the world -- and that is to promote understanding, to promote respect for minority rights, to try to appreciate the differences that may exist among us."

4 Feb, 2006: Mobs in Damascus attack the Norwegian, Danish, Swedish and French embassies (fire damages the first two) but are beaten off by riot police. Protesters, including a man dressed as a suicide bomber, gather for a second day in London The Vatican says the right to freedom of expression does not imply the right to offend religious beliefs.

4 Feb, 2006: UN Secretary-General Kofi Annan says "I share the distress of the Muslim friends who feel that the cartoon offends their religion...I also respect the right of freedom of speech. But of course freedom of speech is never absolute. It entails responsibility and judgment."

5 Feb 2006: Demonstrators set fire to the Danish Embassy in Beirut, overwhelming Lebanese security forces. A protester dies. America and Lebanon blame Syrians for the riot. The Lebanese Interior Minister offers his resignation. Lebanon's most prominent Sunni leader, Saad al-Hariri, vowed to track down and prosecute those involved in the attacks. Around 4,000 protest in Afghanistan. Iran withdraws its ambassador from Copenhagen. Denmark urges its citizens to leave Lebanon as soon as possible. Iraq's transport ministry freezes contracts with Denmark and Norway

6 Feb 2006: Protester killed in Afghanistan as demonstrations take place in Kabul and the city of Mihtarlam. Crowds gather in Srinagar, the capital of Kashmir, and three cities in Indonesia. Pressure mounts in London to prosecute protesters for inciting violence. Students of New Delhi's Jamia Milia Islamia University join the protest in New Delhi.

6 Feb, 2006: Twenty-two year-old Omar Khayam, who dressed as a suicide bomber during a protest in London, apologises for his behaviour to the families of the 7 July bombings..

6 Feb, 2006: Denmark lists14 countries asking its citizens not visit them unless strictly necessary. A mob of about 1000 demonstrators attacks the Danish embassy in Tehran with stones and fire bombs. Iran decides to cut all trade ties with Denmark.

6 Feb, 2006: British Prime Minister Tony Blair says his country will give its "full support and solidarity to Denmark, even though the anger over the drawings was understandable."

6 Feb, 2006: US Department of State's Spokesman Sean McCormack says: We condemn acts of violence related to this issue. Certainly we support peaceful expression, peaceful protest, as that is a fundamental right. But we strongly condemn acts of violence. We put -- the White House put out a statement with regard to Syria, the burning of the embassies in Damascus. I think that speaks for itself.