He always loved a challenge. Second-best had no place in the Kiwi's outlook. The bigger the stage, the loftier he would be in terms of performance... 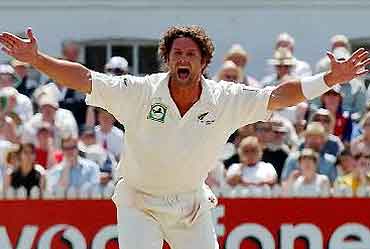 Class was writ large on whatever Chris Cairns did on the field. Whether batting, bowling or fielding, a fully fit Cairns often gave the impression of trying to soar higher than most of the other Kiwis. The famous Cairns charisma won't be on display in Test matches any more as the brilliant all-rounder has decided to bid adieu to the heavyweight division of cricket. Thankfully, he has made himself available for national duty for at least the shorter version of the game.

The third and final Test against England at Trent Bridge was his farewell appearance on the big stage of cricket which he graced with his super skills and outstanding exploits. But what a way to go! Those who had the cheek to say Cairns had lost some of the old sting in his bowling were in for a shock when he ripped apart the English batting line-up in the first innings with a burst of five wickets.

As if that weren't enough, he provided his teammates with a glimmer of hope of what would have been a pride-salvaging victory with another fine spell in the second innings that fetched him four victims more. It's a pity he didn't have adequate support from the other end and, more crucially, the evergreen Graham Thorpe stood like a rock and not just essayed a memorable hundred but also authored a splendid win that enabled England to make a 3-0 clean sweep of the Kiwis.

Cairns the bowler couldn't possibly have done more in his last Test. Interestingly, despite injuries slowing down his speed, he didn't like to be called a medium-pacer. Not till his last hurrah. It was in keeping with the Cairns persona. He always loved a challenge. In fact, second-best had no place in his outlook. The bigger the stage, the loftier he would be in terms of performance. There was this competitive edge to Cairns -- even when playing drinking games or tiddlywinks.

With cricket flowing in his veins, and given the rare talent for batting and bowling he was endowed with, Cairns was bound to carve a niche for himself in international cricket. Of course, it took him a while to emerge from the huge shadow of his illustrious father, Lance Cairns, a robust speedster more renowned for his lusty hitting down the order and towering, flamboyant sixes on public demand.

But when he finally did, there was just no stopping Cairns as he began to test the best of batsmen and bowlers with his quality pace bowling and powerful batting. That he was an all-rounder of rare ability and even rarer brilliance was obvious enough. Even a cursory glance at his scintillating, sunshine cricket convinced the most die-hard of pundits that Cairns wasn't a journeyman sportsman.

In a way, Cairns was a perfect cricketer who excelled equally well both with bat and ball. When in prime fitness, in belligerent mood and on song, Cairns was the most dangerous cricketer imaginable. He was possibly the most handsome among his contemporaries, although his dazzling popularity had more to do with his top-notch cricket than his looks.

Like most teenagers of the 1980s, Cairns grew up idolising Ian Botham and Viv Richards. And his great cricketing dad, of course. Cairns, a megastar in his own right, may have lived up to their deeds in more ways than one. If anything, Cairns had as much a penchant for smashing sixes as Botham, Richards and Cairns Sr. It was in the fitness of things that Cairns surpassed Richards' long-standing record of 84 Test sixes just before bringing down the curtain on his career.

Like his father, Cairns also stood out for the very size and style of his sixes. "On a couple of occasions he entertained us royally after partying hard the night before because he didn't want to run too many. In a pre-season innings in Pretoria, he kept clearing their biggest stand. The locals' jaws were all dropping because they'd never seen anyone do it before,'' said his Nottinghamshire colleague Paul Johnson.

Ironically, more than his batting or bowling, it was his hair that caught the eye when Cairns was first sighted, like a comet, on the cricket plains of New Zealand. Ditto at Nottinghamshire when he first arrived there on a scholarship. With his long, loose and curly hair he looked more like a footballer than a cricketer. "It was the ultimate hairdo of all time. It was a big, bushy thing," recalled Johnson. "One or two players in the current Kiwi side seem to have taken it on board."

Cairns, whose belligerence sometimes landed him in trouble, not the least when he had been thumped in nightclubs, or when he gave vent to his fast bowler's aggro and invited the wrath of the authorities, may not have been an ideal, virtuous man. But few cricketers have shown the kind of commitment and dedication Cairns did almost throughout his career. He was nothing less than a trump card for all his captains, not just for Stephen Fleming.

An eternally injury-prone cricketer, Cairns' figures and feats would have been more startling, if he hadn't missed nearly the same number of matches that he played for his country. If New Zealand is no longer a Cinderella side it had been for so many years, it's thanks to gifted, fighting cricketers like Cairns. He was inarguably the finest all-rounder to play for New Zealand. If not bowling, his batting was far better than that of Sir Richard Hadlee.

An intelligent man, Cairns was one of the most misunderstood Kiwi cricketers simply because he tended to call a spade a shovel. But he was a fine human being, regardless of his occasional bouts of a young hunk's escapades and shenanigans. Given his stunning looks and excellent voice that gave him quite a majestic personality, Cairns could have made a successful career in the tinsel town.

Once, when this writer suggested he try his luck in films, Cairns said: "Me and movies? No way, maan! I'm fine with my cricket and my girlfriend. Let alone acting, I'm not cut out even for modelling. But I'm really thrilled that you consider me good enough to be a film star."

As it transpired, silver screen's possible loss was the willow game's gain. For, besides being a cricketer of a very high order, Cairns was a colourful character, too. Test cricket will sorely and surely miss him.