The Brutality Of CPM Workers Is Still Understated And Less Analysed

The issue is wider and goes beyond the boundaries of Kerala. 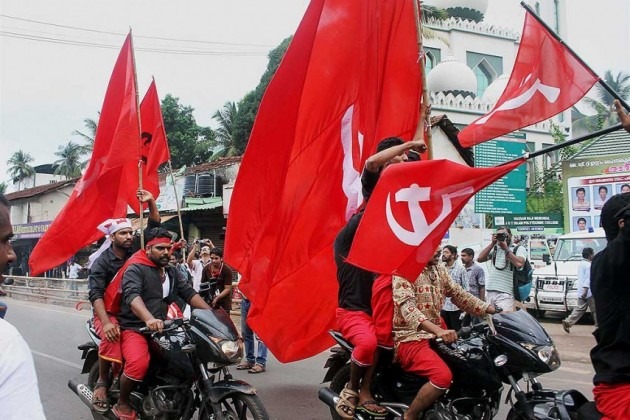 Amit Shah’s pad-yatra in Kerala has touched the right chord by awakening people against violence and hatred that has deeply hurt the democratic spirit of the people in Kerala. Its the gun culture adopted and practiced by the communist ideological groups that has taken lives of  thousands of security personnel and citizens in various states of india forcing Indian govt to declare thirteen states as 'Left extremism affected areas'.

Though we discuss 'gun culture' in US and unfortunate incident at  Las Vegas has once again started a serious debate over but the gun culture, here in India so enthusiastically preserved and maintained by the communist terror groups has remained wrapped in sympathies for the left extremism in some quarters .

The guns that left extremists wield today and use in various parts of the nation have wrecked havoc creating a reign of terror in more than thirteen states and the previous Prime Minister Dr Manmohan Singh described it as the biggest security threat India faces . The Ministry of Home Affairs , commenting on the gun wielding communist extremist groups says ,“Between 2010 to 2017 (upto 15.05.2017) around 2457 civilians and 930 security force personnel have been killed by the Maoists in different parts of India. The majority of the civilians killed are tribals.”

In Kerala alone under the chief ministership of Mr Pinary Vijayan, thirteen RSS, BJP workers have been hacked to death. As Mr Amit Shah stated , “Since the LDF government came to power 13 of our workers got killed. Some of the gory murders took place in CM’s own constituency. He is answerable to these killings……violence in the state has increased manifold ever since the Left Democratic Front (LDF) started its rule …The politics of intolerance can’t continue like this. Violence is no means to ideology. Communists should introspect why their ideology is vanishing all over the world. We have seen its plight in West Bengal.”

The brutality of CPM workers is still understated and less analysed. The more shocking reality is the brutalities of the warriors of the words in Delhi  shown through their silence or a discreet approval of the naxal /CPM violence. They  wont even recognize the pains and sufferings of people  with whom they differ ideologically .  The RSS, BJP workers killed in Kerala belonged to the Hindutva ideology.Hence  can the silence over their elimination be justified?

The same silence is observed when security personnel and political leaders are killed by naxals in other regions of their influence.

The issue is wider and goes beyond the boundaries of Kerala.

Remember Mahendra Karma ? The dynamic leader of Chhattisgarh was a wonderful person known as a noble crusader ‘unlike politicians’. I had shared the dais with him in Raipur to release a book on Maoist terrorism written by Anil Pusadkar. He was straightforward, didn’t mince words and said the Naxals are the greatest enemies of humanity. They are cowards and have no feelings for the poor. Mahendra Karma won accolades wherever he went. A simple, unassuming and charming tribal leader he was. His death was met with a eerie silence by delhi’s media moguls . It shouldn’t have happened. Karma, state Congress chief Nandkumar Patel, his son and security personnel shouldn’t have died. They had so much to contribute to the Indian democratic life. The deaths should have  shaken up the nation into a united action against the anti-national cowardly forces disguising as ‘revolutionaries’. Instead the very idea of salsa Judam was debunked and discussed as if Karma chose a wrong path hence invited his end.

Known as Maoists, Maovadis, left extremists, Naxalites, these violent groups adhering to the Communist ideology as propounded by Lenin and Mao are spread in 171 districts of 13 Indian states. In the second week of July 2009, they had killed 76 security personnel including a young and dynamic superintendent of police near Dantewada in Chattisgarh. The entire nation was enraged.The Prime Minister said that Maoist violence poses the biggest threat to India.

But after that a known Maoist sympathizer was inducted into the corridors of the government as adviser to the Planning Commission. It was a blow to the democratic workers of the RSS, BJP  who were facing the attacks from CPM workers  in Kerala as well as to those security personnel and citizens facing Maoists in Chattisgarh.

Who are these Maoists, the ideological comrades of the CPM workers ? Mostly these Maoist/Naxal groups function under the umbrella organization Communist Party of India (Maoist) that has been banned by the Home Ministry of India as the 34th terrorist organization under the Unlawful Activities (Prevention) Act. These Maoists organizations/groups have been found to be working as ‘partners’ at various times and locations with SIMI,ULFA, Lashkar-e-Taiba (LeT), Harkatul Mujahideen, Al Badr, Jamat-ul-Mujahid and Hizbul Mujahideen (HM).

The Central Committee of the CPI (Maoist) has published a secret red book ‘Strategy and Tactics of the Indian Revolution’, which is said to be the Naxals’ Bible. Talking about supporting anti-national movements the book says: “Lakhs of enemy’s armed troops have been deployed since long in J&K and the north-eastern States. More and more nationalities may come into armed confrontation with the reactionary Indian State, so it will be difficult for the Indian ruling classes to mobilise all their armed forces against our revolutionary war.” It is noteworthy that the Maoists/Communist violence is targeted against Hindu workers and has a communal angle to it. They were responsible to kill Swami Lakshmananand in Odisha for helping Hindi tribals retain their religion .

These Maoists/Naxals get mouth loads of sympathies and support in Delhi’s pseudo intellectual circles belonging to stinking rich classes. They would never discuss why Maoists feel good to seek help from the Pakistan based terrorist groups targeting India.

In fact if CPM workers in Kerala and Maoists/ Naxalas are responsible for killing farmers, teachers and youth as well as our security personnel, the responsibility of this blood bath has to be equally shared by the apologists to these groups who are spread all over.

And they are powerful people.

They own various media houses, electronic channels, have close contacts with the ruling party bosses. They feel emboldened by their highly influential positions to campaign in support of known Maoist sympathizers and have him share an honourable seat of power in the planning commission.

This is a part of the psychological war Maoists plan. To have a gun-raj in jungles, and to get visible in the honourable circles of the power.

The apologists to the Maoists say they work in an area where state sponsored exploitation of the poor is rampant, corruption makes peoples life a hell and political powers indulge in the loot of the people. But is the gun an answer? And if the Maoists are so noble hearted revolutionaries, have they created a single island of Maoists-Leninists haven where the farmers are happy, getting a better yield and a reasonable price to their produce, schools are ably run, girls are safe and roads, hospitals established?

In fact the operations of the Maoists have turned their areas of influence in the most backward and lonely islands of poverty, fear and illiteracy. They take away, at gun point, students and young kids to work for them. If refused they kill their parents before the eyes of their children. More than 400 such destitute children are living in various hostels run by NGOs in Raipur and adjoining areas. Has any ‘democratic right organisation’ penned the plight of these children?

This is the ‘revolution’ that the rich classes of Golf Links and Shantiniketan support.

When a Dalit swayamsewak Rajesh was killed in Kerala, some of the women MPS sent a Rakhi to his brother . I am quoting their letter to underline the pains and sufferings of fellow Indians which remains unaddressed due to ideological hate and apartheid.

In a letter to Rajesh's younger brother Rajiv, women MPs from Uttarakhand, Gujarat, Maharashtra ,  UP, Bengal and MP ,Mrs. Riti Pathak,  Mrs. Sampatiya Uike , Mrs. Anju Bala, Dr. Bharti ben Shiyal, Mrs. Mala Rajya Laxmi Shah, Mrs. Roopa Ganguly and Mrs. Pritam Munde said “This year we dedicate  Rakhi to Rajesh, a dalit swayamsewak from Kerala who became victim of CPM violence and want  his family  to know that all sisters across the nation - are standing with  them. They sent  Rakhis to Rajiv, brother of Rajesh Edavakode, a dalit RSS worker who was brutally killed by CPM goons on 29th July 2017, near Thiruvananthpuram when he was returning home after attending the RSS Shakha late evening. He was a daily wage earner . His body bore 89 injury marks.

The letter said-“ Dear Rajiv Bhayya, ( brother) we know you are undergoing a difficult period and mourning the death of your brother Rajesh. We want to say, you are not alone, we are your sisters from various parts of the nation and we share your grief , stand with you and your family.

"We are sending you a thread of Rakhi, as a mark of our love, support and respect for you, and to say, we are praying to God for your protection and for the long life of everyone in your family. Through this Rakhi -thread, the message we want to convey is every one in Kerala should be safe. CPM Talibanism has taken many precious lives of young people who belonged to RSS, BJP, IUML, CPI and Congress.

"This is violence against humanity and against our constitution and let all the women cutting across party lines stand against it, act together to defeat it.

"We pray for all the victims of CPM Talibanism and want to assert that the first to bear the brunt of such violence are always women. Men are killed and women bear the consequences of each one of such violent act life long. It becomes, unspeakably, a difficult journey for them. Through our Rakhi to you, dear Rajiv ji, we want to convey that you and brave persons like Reena, Lalita, and your wife, who believe in India, must not lose hope and work to have a bold, courageous Kerala rise - safe for everyone.

"We all stand with them against the CPM Talibanism and we wish you a long life. Our Rakhi is a 'Raksha Kavach', a 'protective shield' for you and for all Swayamsewaks and all Kerala people, belonging to all faiths and denominations. It is a message of peace and appeal for an acceptance of all shades of views."