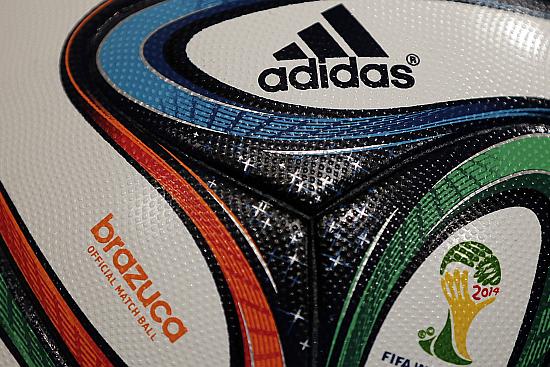 After the 32 participating nations announced their World Cup squads and most domestic football leagues around the world wrapped up their seasons, the attention has turned firmly to the action that has now begun in stadia across Brazil this summer.

Cue the spectacular advertising campaigns put on by brands and companies the world over, in a bid to cash in on the World Cup. Traditional sportswear powerhouses like Nike and Adidas have gone head to head in the production of high-budget commercials and promotional projects featuring footballing superstars, while companies that by nature don’t have anything to do with football—take Pepsi and Samsung, for example—have built a roster of star players to feature in their campaigns.

From official “FIFA Partners” to “National Supporters,” from “FIFA World Cup Sponsors” to unrelated companies targeting the football-fan demographic, the World Cup this summer features a multitude of brands competing for their ideal target market—FIFA has even designed and implemented a three-tier sponsorship structure to amplify and increase the profitability of the marketing frenzy in their flagship tournament.

Even the footballing action is and will be dominated by sponsors: the flashing billboards adorning each stadium, the official live broadcast coverage partners, the athletic gear worn by the players—given the frenetic advertising environment, perhaps international football should receive some credit for not yet caving into the lucrative practice of featuring official sponsors of national team kits.

The nature of the World Cup, and the reverence with which its fans and participants treat its ultimate prize, mean that football will be the main star in Brazil this summer. But that hasn’t stopped—and won’t stop—the considerable momentum that the branding and sponsorship activities have built over the years in their evolution into a prominent sideshow to the tournament.

How It All Began

It wasn’t always this way. There was a time when the World Cup—even professional football altogether—was just about the sport. But the phenomenon of television changed things forever.

The impact of television on the World Cup’s worldwide commercial boom cannot be understated: According to TIME, the number of TV sets worldwide “increased more than twentyfold” from 1954 to 1986, “from a little more than 30 million to more than 650 million,” laying the foundations for a truly groundbreaking moment in football history.

While the first live World Cup games, broadcast in Europe for the 1954 tournament held in Switzerland, reached only a handful of audiences due to the low number of matches shown, the potential of television and TV advertising was already apparent. In 1974, new FIFA president Joao Havelange turned his organization into a modern international NGO upon taking office, as he put in place the infrastructure, people and income-drive of a corporation to conquer the world of football and reap the ensuing economic benefits.

After the rapid expansion of the World Cup tournaments under Havelange’s watch—he added eight participant slots to the tournament, while also introducing other versions of the World Cup, including the U-17 and U-20 iterations, as well as the Confederations Cup—came the idea of corporate sponsorship to help bear the costs of hosting a global tournament in one country.

Thus came money-spinning deals with Adidas and other big-name corporations like Coca-Cola to finance the tournament, while television advertising, which had grown to become a huge cash cow with the boom of TV, led to increased premiums for marketers to get their spots and campaigns onto World Cup TV screens.

The sponsorship boom that began under Havelange has been taken to unprecedented new levels during the tenure of current FIFA president Sepp Blatter. According to a UPenn study, the stellar lineup of corporate FIFA sponsors (otherwise known as their “partners”) for the 2010 World Cup in South Africa included Adidas, Coca-Cola, Emirates Airlines, Hyundai-Kia Motors, Sony and Visa—who were “guaranteed exposure in the tournament stadium” and would receive “direct advertising and promotional opportunities and preferential access to TV advertising.”

As a result, FIFA’s revenues from the South Africa tournament reached a staggering $1.022 billion, and FIFA was to provide $420 million to all participating national teams and the football league teams providing players to those national teams. $30 million would go to the World Cup-winning team (Spain), while first-round teams automatically qualified for $8 million each. $1 million in preparation costs were provided to each participating football association.

So, yes, it’s a sporting achievement and an indication of a country’s footballing proficiency to qualify for a World Cup—but it’s also a great way for national football associations to make money. Football—and the World Cup—can no longer be considered as its own entity, separate from the clutches of money. After a period of explosive growth and the influence of a few key players, the World Cup and money have become intimately intertwined.

FIFA has ridden on this wave to further corporatise and globalise itself. Since introducing the World Cup in the United States in 1994, a move that proved to be a stunning success (USA 1994 still holds the total attendance record and average all-time attendance record), the World Cup has since traveled to Asia (2002), Africa (2010), and will go to Russia in 2018 and the Middle East in 2022. According to the Telegraph, Blatter has even entertained the idea of hosting the 2022 tournament across several countries in the Gulf region, which would multiply the brand and advertising exposure for FIFA’s partners across geographies.

To Sponsor or Not to Sponsor?

It’s not only the football that wins, however—after all, there has to be an inherent attraction to becoming a World Cup sponsor in the first place. Otherwise, brands wouldn’t be tripping over themselves to secure eye-watering contracts with national teams, players and the tournament itself.

So grand is the World Cup stage, that even smaller brands and smaller teams involve big sums of sponsorship money. Spain’s Joma sponsored Honduras in 2010 for $2 million a year, while China’s Hongxing Erke Group paid $7 million a year for the North Korean team.

But the battle is always at its most intense at the top of the footballing hierarchy, simply because a brand’s association with a team’s success will do wonders for its own brand performance, not least in terms of direct revenues. The UPenn study cites forecasts that the Adidas’ sales in the domestic Spanish market would grow by 8% if Spain won the World Cup in 2010 (they did), which would mean an overall 50% increase in Adidas’ sales from previous forecasts for 2010.

A continued association with success is also the driving force behind Nike’s contract with high-profile teams like Brazil, Portgual and the Netherlands, which guarantees a high level of visibility for the million-strong World Cup audiences around the globe. As the apparel hits stores worldwide ahead of, during and after the tournament, money will flow into the coffers of these high-profile brands, and even more so if their sponsored national teams perform well.

This explains the recent trend of new national team kit designs almost once a year: Brazil, England, Germany, Spain, Argentina and France are all examples of world-famous teams who have launched high-profile events and flashy marketing campaigns in conjunction with big-name sportswear companies and top international stars. And there are still those companies outside the sports arena that have allocated major funds and expensive campaigns to up their branding and advertising ante with the World Cup on the horizon.

Without doubt, the growth in sponsorship opportunities have provided many an ambitious brand to take advantage of World Cup to reach out to bigger audiences and rake in the ensuing benefits. But this path must be treaded properly.

The danger is that new kit launch events and over-the-top advertising campaigns have become hype machines that serve no purpose, and the risk is that the ever-expensive replica kits—one of the many inevitable products of the evolution of branding and sponsorship into World Cup sideshows—have become out of reach financially for that most important demographic when it comes to the most famous football tournament on earth.

For what is the World Cup without the common football fan?

Vince Siu is a featured columnist on the Premier League and football business for Bleacher Report, and is interested in exploring football’s potential for both societal and commercial good. Follow him on Twitter: @vincetalksfooty

'Union And The States Must Complement Each Other'