The Battle For Bihar

RJD and JD(U) leaders slug it out by trading charges on the recent dissolution of the Bihar Assembly -- who had the numbers, who tried to bribe whom and who was responsible... 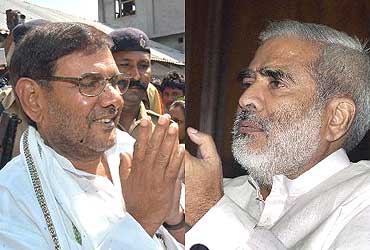 Transcript of the BBC Hindi special programme, Aapki Baat BBC Ke Saath with union rural development minister and senior RJD leader Raghuvansh Prasad Singh and JD (U) stalwart, Sharad Yadav on why have the leaders of Bihar failed the electorate of the state.

Nagendar Sharma: Why have the leaders of Bihar let down the electorate? The public seems at a loss to understand what is happening there. Do you take responsibility?

Raghuvansh Prasad Singh: Well, a lot of hue and cry was raised about 15 years of RJD rule in the state. All the forces were united against us, even one of the constituents of our alliance at the centre, Ram Vilas Paswan’s LJP added to the confusion in the state. The result was a fractured mandate. Despite all efforts to dislodge RJD, we did emerge as the single largest party, despite all odds. But, yes, we could not get the required figure and that is why Bihar does not have a government today.

Sharad Yadav: The government was about to be formed in Bihar when the UPA decided to subvert democracy. The NDA had won 92 seats in February, 17 MLAs belonging to smaller parties and independents had given unconditional support to us, taking the NDA tally to 109 in 243 member assembly. Now 22 MLAs belonging to Ram Vilas Paswan’ party decided to come with us -- thus we had the required number, and were about to stake claim on 23rd May. But at midnight, on 22nd May, the UPA government at the centre, under pressure from Lalu’s RJD decided to recommend fresh elections.

This was the worst possible assault on democracy. Therefore it is not that the parties could not form a government in three months, but the ruling alliance wanted something else.

BBC listener from Madhubani (Bihar):: My question, to Raghuvanshji, is what is the basis of allegations levelled by him recently that NDA was trying to buy MLAs by bribing them upto three crore rupees? And, Sharadji, how do you reply to this. It is a serious allegation.

Raghuvansh Prasad Singh: Well, governor Buta Singh had warned 10-15 days back that he had information about attempts of horse-trading. In fact, he had warned all the parties of Bihar to stay away from these corrupt practices. Why did the NDA take the MLAs of Lok Janshakti to Jharkhand? It was because they had a government there and could do whatever they wanted. NDA is an expert in horse-trading. In Jharkhand, they had kidnapped five independent MLAs, taken them to Rajasthan and then forced them to support their government. Here the NDA was exposed before it could do this. Now they are crying over violation of the constitution. Is not allowing time for horse-trading a violation? We succeeded in foiling the worst malpractice in democracy --that is, to form a government by bribing MLAs. How can they claim 22 MLAs, when Paswan was claiming he had 10 MLAs with him.

Sharad Yadav: It is strange. When more than two-thirds of MLAs belonging to Paswan’s party were ready to support us, how can they call it horse-trading? The constitution of the county clearly says if two-thirds of the group is ready to merge with another, it would be recognised. Why is the UPA alleging without basis? Merely 11 MLAs were in Jharkhand, the others were at different places. If it was horse-trading, then why did the UPA not proceed with any legal action? Why are they merely talking, they should prove it.

BBC listener from Jodhpur: We have two big leaders fighting over government formation, but what about the people of Bihar? Can Raghuvanshji reply what has his party done for the state in past 15 years? We have only broken bridges and roads with potholes. ..

Raghuvansh Prasad Singh: It is easy to point out the backwardness of Bihar, but nobody looks at the reasons.For the past six years, there was a NDA government at the centre, which did not release adequate funds for our state. Let me give you an example about my ministry, Rural Development: More than Rs 1800 crore was blocked by the centre, and all schemes in rural areas remained a non-starter due to this. Bihar has been a victim of step-motherly treatment by successive central governments. Sharad Yadav was one of the twelve ministers from Bihar in the NDA government for six long years. Can he tell me what all they did for the state? We have tried to change all this during the past year of UPA government.

Nagendar Sharma: Sharad Yadav, how do you respond to this charge? And if the people were against RJD, why did you fail to get a majority in the February polls and even after three months you could not muster support?

Sharad Yadav: I think people like Raghuvansh are in politics because they can talk and do nothing else. The NDA government had given a special Bihar package of Rs 52,000 crores. It was for basic infrastructure, roads, development of Patna airport etc., but why the RJD government did not spend it properly is for them to answer. So far as three months time is concerned, please remember that Vidhan Sabha was kept in suspended animation for six months, and within three months, we were able to get the necessary support required to form the government. We would parade more than 130 MLAs before the president for the world to see the reality.

BBC listener from Spain: One year has been wasted by NDA crying hoarse on tainted ministers, but can Sharad Yadav say confidently that they are no tainted leaders in NDA? On the other hand, Laluji’s RJD claims to be secular despite their ally Congress joining hands with Muslim League in Kerala...

Sharad Yadav: Well, you have raised some valid points. There has been a in this 57 year old Indian parliamentary democracy. No person charged for economic offences remained a minister during Congress governments, or United Front or even NDA governments. I was the Janata Dal president in 1996, when the UF government was formed. I was facing false charges for Hawala, therefore I refused to become a minister. I had said, though false, charges are charges, and I would like to be cleared before joining the ministry. The NDA, during its tenure, did not allow a single person facing economic offence charges to be in the ministry. Remember, Buta Singh had to go out of the cabinet then? It is now for the UPA government to continue following this tradition -- would they do it?

Raghuvansh Prasad Singh: Well, NDA leaders should try and look into their own selves before preaching morality to others. Sharad Yadav should know well that he has been supporting Advani and company who committed the gravest assault on Indian constitution by demolishing the Babri Masjid. Can anyone defend that shameful act, which has led all Indians to hang their heads in shame in front of the world? Traditions for a democracy are good, but a line has to be drawn some where on who preaches them!

BBC listener from Raipur: What has the RJD done during the past 15 years so that people of Bihar should continue to be with them and when would both big parties of Bihar, that is RJD and JD(U) do something constructive, other than mud slinging?

Raghuvansh Prasad Singh: Well, the biggest contribution of RJD rule for Bihar has been the transformation of who wields power. We have succeeded in transferring power from the feudals to the common poor people of the state. It is now the feudal forces who are trying to undo what we have done. The poor and the backwards, who were not even allowed to walk on roads and lead a respectable life for the initial four decades after independence, have been provided a life of honour and dignity by the RJD government.We have fought discrimination, and now the time for development has come. The UPA government would undo the damage done to Bihar by the NDA.

Sharad Yadav: Well, what has RJD done to Bihar is evident from the February assembly elections, where they have got less than one-third of the total seats in Bihar. Let them gloat over the fact that they are the single largest in the state. So far as communalism is concerned, we do not support the demolition of Babri Masjid, and our stand is absolutely clear. But Raghuvansh ji should not forget that it was the Congress, which had allowed the opening of locks at the disputed site in Ayodhya, and it is this that led to the entire trouble in the years to follow. JD (U) is clear, it only supports the NDA on national agenda for governance, and nothing else.

Nagendar Sharma: But, Mr Sharad Yadav, does your party find itself in an uneasy position due to BJP’s agenda? Recently you had criticised the Gujarat riots...

Nagendar Sharma: But does the JD(U) think Gujarat was one of the main reasons for defeat of NDA in last year’s general elections?

Sharad Yadav: Well, there were many reasons for the defeat. I think the major ones were holding of early elections, due to which the NDA government could not publicise and tell the voters all the good work it had done during its tenure.

Raghuvansh Prasad Singh: Sharadji may try to downplay the Gujarat riots, but let me remind him that Sunder Singh Bhandari, a senior BJP man, who was the governor during riots period has raised several questions on Narendra Modi government. Atalji had himself said he is ashamed of what happened in Gujarat. Is anything else left to be said? I am shocked to see Socialists defending Gujarat, the indefensible.

Nagendar Sharma: Raghuvanshji, why did the UPA government not ask governor Buta Singh to give one chance to the NDA to try and form a government rather than force fresh elections on the state?

Raghuvansh Prasad Singh: The results of Bihar assembly elections were declared on 27th February -- why did the NDA not stake claim to form a government in the state for three months? The only party which staked claim to form the government was RJD. Instead of staking claim, the NDA went to the governor to request him not to invite the RJD. Now when they had lured certain MLAs by offering huge sums of money, they are shouting from the roof-tops. What did they want time for? For horse-trading?

According to NDA, if they are not allowed to break MLAs, then it is a violation of the constitution. I want to ask them, why were they afraid to stake a claim to form the government for three months, when they claim that the verdict was against Lalu Prasad's RJD?

About two months back, the NDA chief ministerial candidate, Nitish Kumar had publicly given up the efforts to form a government in Bihar, saying Paswan was not cooperating in his effort. Now what is NDA complaining about? In fact, they are confused about their own efforts. They owe an explanation to the country, as after giving up efforts once, from where did they get the energy and resources to claim again?

Nagendar Sharma: But, Lalu Prasad and Ram Vilas Paswan do not see eye to eye, what would be the UPA's strategy for the fresh assembly polls in Bihar ?

Raghuvansh Prasad Singh: UPA constituents have learnt from the past mistakes and have realised that split of secular votes in Bihar only hurts the voter ultimately. This time we would make efforts to forge a wide unity among secular votes. Let me disclose this now. We did not fare badly because of public anger, but internal reasons. Our ticket allotment was not fully correct. We have learnt our lessons from February. The NDA was lucky then, not anymore.