The Axis Of Opportunity 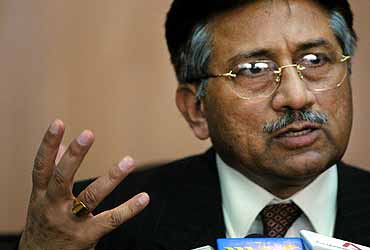 The post-September 11, 2001, volte face of President Pervez Musharraf of Pakistan in joining the US as its frontline ally in its war against the Taliban and the Al Qaeda had three objectives -- to safeguard the strategic nuclear and missile assets of Pakistan from any pre-emptive strike by the US due to fears that they might fall into the hands of the Al Qaeda and other international terrorist elements; to seek as a quid pro quo US activism on the Jammu & Kashmir (J&K) issue in the hope of achieving through collaboration with the US what he could not  through Pakistani terrorist organisations on the ground; and to bill the US for his services in the form of increased economic and military assistance to revive  the comatose economy and to revamp the Armed Forces.

His expectations have been only partly fulfilled.  He, as an individual ruler, has been the greatest beneficiary of his opportunistic decision.  His sins of commission and omission as a military dictator have been overlooked by the US and other countries of the West.  References from Washington DC and other Western capitals to the need for strict adherence to the roadmap to restored democracy have become increasingly muted. His proclaimed intention to continue as the President for at least another five years, even if elections as promised are held in October next, has not been opposed by an US which has let itself be convinced that there is no alternative to an enduring Musharraf if its strategic objectives in the region are to be met and if  the nuclear and missile assets of Pakistan are to be prevented from falling into the hands of terrorists still lurking in the region.

As against this, Pakistan as a nation has lost more than it has gained from his volte face.  The limited gains have been in respect of greater bilateral (US $ one billion plus per annum) and multilateral (another US $ one billion plus per annum) cash flow; generous re-scheduling of the bilateral component of the external debt (US $ 12.5 billion out of US $ 38 billion); removal of restrictions on the sale to Pakistan of spare parts for the US military equipment purchased in the past; revival of military-to-military contacts and training programmes; and limited supply of new military equipment needed for strengthening the military's border management capability on the Afghan border.

The till now belied expectations have been more substantial than those fulfilled.  His pleas for a write-off of the bilateral debt component have had no sympathetic response except from Canada and the Scandinavian countries despite his offer of a debt for education swap, that is, to invest an extra US dollar in the social sector, particularly in education, for every dollar written off.  His calls for the abolition of quota restrictions on textile imports from Pakistan and for the lowering of tariffs have met with resistance  from the US textile industry and its supporters in the Congress.

The greatest loss Pakistan has sustained as a nation has been strategic.  India has played its cards intelligently and well and has gained strategically more than Pakistan.  The Pakistani military-intelligence establishment's illusions of a strategic depth in Afghanistan lie shattered.  The new regime in Kabul -- at least, large sections of it -- feel more comfortable with New Delhi than with Islamabad.

The war has seen an emergence of a discreet convergence of analysis and assessment between New Delhi and Washington DC over the new threats to international peace and security from the dregs of the Afghan war---the survivors of the Taliban, the Al Qaeda and the Pakistani terrorist organisations--- now re-grouping and re-locating themselves in Pakistani territory.

There has definitely been a greater US activism in the South Asian-Afghan region than before September 11, 2001, but not in the direction desired and expected by Pakistan.  In its renewed activism, Washington DC has shown greater sensitivity, understanding  and attention to India's concerns over the threats to its security from these dregs in Pakistani territory than to Pakistan's expectations on the so-called Kashmir issue.

In the debate in Islamabad, which preceded Musharraf's visit to Washington DC, one saw the surfacing of the first indicators of concern over the more costs than benefits accruing to Islamabad as a result of the post-September 11 abrupt change of policy.  These concerns have thus far  been muted in the military-intelligence establishment despite the disquiet of sections of it, led by Gen.Mohammad Aziz, the Chairman of the Joint Chiefs of Staff Committee, over the implications of Musharraf's post-January 12, 2002, drive against the Pakistani terrorist organisations.

The debate also brought to the fore hitherto latent concerns in the Foreign Office over the implications of Musharraf's seeming acquiescence to the US plans for a permanent and enhanced US presence, not only in Southern and Eastern Afghanistan, but also in Pakistan itself.  The US plans for such a presence arise from a variety of  motives -- to make the region safe for US oil and gas interests; to have a fall-back position if the Saudi regime insists on a thinning out of the US presence in Saudi Arabia; to have discreet bases for the expected covert destabilisation  operations against the ruling Governments in Iran and Iraq; to counter a possible dilution of  the oil and gas interests of companies based in Texas, Bush's home State, which presently control over 30 per cent of the oil and gas market in Pakistan, due to the increasing Chinese role in the development and exploitation of the oil and gas resources of Pakistan; and to ensure that Pakistan's weapons of mass destruction do not fall into the hands of the terrorists.

What alarmed the professionals in the Pakistani Foreign Office during the pre-US visit debate was that Musharraf appeared to be not only unconcerned over the impact of the US plans on Pakistan's relations with Iran, Iraq and China, but even willing to help the US covertly in its destabilisation operations against the present Governments in Iran and Iraq in return for its strategic support to Pakistan vis-a-vis India and benign silence and inaction on Pakistan's nuclear and missile relationship with China and North Korea.

What he could not gain by projecting himself as the frontline ally of the US in the war against the Taliban and the Al Qaeda, he hopes to gain now by offering himself and his country to the US as a covert ally in its planned destabilisation operations against Iran and Iraq in the name of eradicating terrorism.

Amongst those in the Foreign Office, who forcefully articulated these concerns, was reportedly Abdul Sattar himself. Unconfirmed reports from Pakistan indicate that Musharraf has consequently kept him out of his forthcoming talks in Washington DC.