The Axis Of Irony

Has the Iraq crisis reinvigorated the UNO? Revealed Bush Jr.to be more of a multilateralist than the rest of the world thought (and feared)? Yes, says, the former US deputy secretary of state, there remains a high degree of continuity in American for 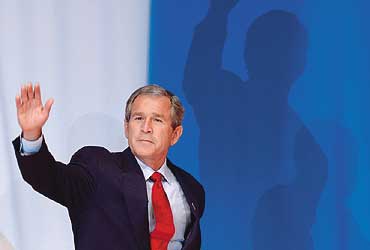 When George W. Bush assumed office in January 2001, many in his administration believed that the U.S. was a Gulliver who had given the Lilliputians the ropes to tie him down. Theirs was a new, more assertive, less consensual brand of internationalism. American foreign and defense policies would be rooted in the preeminence of American power and the willingness of the president to use that power to advance U.S. interests, unfettered by international agreements or institutions.

The new team in Washington relished the chance to show that it would have nothing to do with treaties that it deemed outmoded or that crimped American freedom of action. It had little use for alliances and international bodies. The United Nations and even NATO were more indulged than respected, more managed than utilized. Nor was the administration interested in following through - and improving - on diplomatic initiatives it had inherited from its predecessors in the Middle East and the Korean peninsula. There was some distaste for the very enterprise of diplomacy, which by definition entails compromise, and that was no longer to be the name of the game.

The stark horror of September 11 provided an almost ideal opportunity for the U.S. to demonstrate what it could do to its enemies with a combination of military prowess and political will. It also heightened tolerance abroad for a robust, purposeful, and devastating exertion of American power. A combination of international sympathy, outrage and solidarity muted, for the time being, complaints that Bush was a cowboy in charge of a rogue superpower. Instead, as a number of editorials in Europe and Asia commented at the time, the President suddenly had the look of a brave and righteous sheriff, like the Gary Cooper figure in High Noon.

In that movie, the townspeople cower behind closed curtains and locked doors while the sheriff squares off against the villains on a dusty street. The war in Afghanistan, however, departed from the Hollywood script. Largely at the instigation of Secretary of State Colin Powell - who had until then been a rather lonely and battered figure, outnumbered and outflanked by the unilateralists in the administration - the U.S. took several weeks to assemble a broad-based coalition, so that when the showdown with the Taliban and al-Qaeda came, the scene had more the look of a sheriff and a posse driving the bad guys out of town.

Then came the Iraq sequel. Even before Osama bin-Laden went to the top of America's Most Wanted list, President Bush had his sights fixed on Saddam Hussein. That was why the administration pivoted quickly from the war it waged a year ago in Afghanistan to the war it is preparing to wage soon in Iraq. It hoped to apply the energy generated by U.S.-induced regime change in Kabul to accomplishing the same objective in Baghdad. It had trouble, however, transferring international support for its handling of September 11 to its campaign to oust Saddam.

In the late summer, there seemed to be a growing determination, personified and articulated by Vice-President Cheney, to dispense with the UN and do whatever it took, with whoever would join an ad hoc coalition, to bring down Saddam. President Bush kept that option open when he went to the UN on September 12. He warned the UN that it risked becoming irrelevant and going the way of the League of Nations.

But, in a strategy designed largely by Powell, Bush said he would prefer working through the Security Council and using a tough new resolution as the instrument for forcing Saddam to disarm or, if Saddam refuses, as the basis for military action.

The tactic worked. The Security Council unanimously passed a resolution with teeth.

That's the first of the ironies that critics of the administration's mindset and mode of operation must recognize: Bush's ultimatum - his threat to act independently of the UN - may actually have saved the body from precisely the irrelevance that he warned against.

But there's a second irony: having won something close to the resolution he wanted, Bush may now be all but locked in to a UN framework for dealing with Iraq. He will no doubt reiterate that the U.S. has all the authority it needs to pull the trigger on Saddam. Indeed, he must keep reminding the UN of his determination, or the UN will slip back into playing a cat-and-mouse game with Saddam in which the mouse wins.

Still, having brought the Security Council this far and having put the new inspection regime in place, Bush is likely to stay with that process. Not only is he vested in it, but to break ranks with the UN would cost him international legitimacy, the participation of many states both in the conduct of the war and the keeping of the troubled peace that will follow, and U.S. domestic support as well (since the polls show that most Americans want a U.S.-led but UN-authorized action).

So on the issue of Iraq, at least - the one that the administration came into office determined to solve once and for all - Bush has become a multilateralist, even a traditionalist in his preference for working through international bodies in dealing with the villains of this world.

That leads to the third and final irony: Bush may well end up dealing with Iraq in a fashion that is quite consistent with the way his predecessor, Bill Clinton, dealt with similar threats to international peace.

The past dozen years, since the end of the Cold War, reveal a pattern in the way that three American presidents have made their country's power the driving force behind interventions on behalf of the international community.

The first President Bush did that in the 1991 Gulf War. He used his personal rapport with Mikhail Gorbachev to keep the Soviet Union, then in its dying days, from casting a veto in the Security Council.  The Clinton administration was marked by a series of conflicts, different in many respects but all with the common denominator that the U.S. took the lead in threatening and applying force. In each of these conflicts, with the U.S. in the lead, the UN and other global or regional bodies provided the cover of international participation in the military operation and in the nation-building that followed: the invasion of Haiti in 1994, which expelled a military junta and restored a democratically elected president; the use of air strikes against the Serbs in Bosnia in 1995, which forced them to the negotiating table; and the bombing of Serbia in 1999, which ended ethnic cleansing and established a NATO-enforced, UN-supervised protectorate in Kosovo - and which also led to the end of Slobodan Milosevic's dictatorship and to his current trial for war crimes in The Hague.

Thus, the Bush administration, for all its initial determination to repudiate anything and everything Clintonian, is now poised to deal with Saddam Hussein in a similar fashion, whether dealing with him means merely disarming him or - the unmistakable preference - decapitating him.

Back in the early months of the Bush administration, it was often said that what distinguished the new president's approach to the world from his predecessor's (and, for that matter, from his father's) was that those earlier occupants of the White House operated on the slogan: together if possible, alone if necessary, while with George W. Bush, it's the other way around.

Iraq may play out as a disproof of that conventional wisdom and as a reminder that there remains a high degree of continuity in American foreign policy - stretching from Bush to Clinton to Bush.

If so, that will come as a relief to much of the rest of the world, and it will increase the chances that others will follow the American lead in the future.

Strobe Talbott is the president of the Brookings Institution. He was deputy secretary of state in the Clinton administration and the first director of the Yale Center for the Study of Globalization.

Rights: © Copyright 2002 Yale Center for the Study of Globalization