The Arbiters Of Hindutva

'It is for Hindu religious leaders and social reformers to talk on the religion,' and not a 'declared non-believer' Karunanidhi, argues RSS mounthpiece Organiser. Why, then, does it present itself as a saviour of Muslim women from the 'tyrann 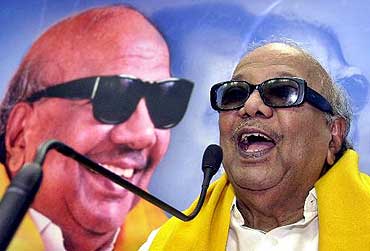 The irony cannot be more striking. Known for their fierce opposition to reforms in Hindu law that sought to ameliorate the conditions of Hindu women, Hindutva groups present themselves as ardent champions of Muslim women. The image of Muslim women as oppressed by their men and their religion is central to Hindutva discourse, buttressing their claim of Islam and Muslims being inherently and unrepentantly ‘obscurantist’ and ‘barbaric’. This explains the hypocritical defence by Hindutva ideologues of Muslim women’s rights, while at the same time the pogroms they unleash lead to the death and rape of Muslim women.

While Hindutva ideologues present themselves as saviours of Muslim women from what they describe as the ‘tyranny’ of Islam, they are fiercely opposed to any measures that might threaten Brahminical Hindu patriarchy. Thus, the cover story of the last issue of Organiser, the RSS’ official English weekly, protesting against a move to reform Hindu marriage, should come as no surprise. Titled, ‘A Mischievous Proposal to Tinker With Hindu Faith’, and written by a certain R. Balashankar, the article furiously denounces the proposal put forward by the Tamil politician, M. Karunanidhi, leader of the anti-Brahmin Dravida Munnetra Kazhagham, to allow for ‘self-respect’ marriages that do without a mandatory priest, who is generally a Brahmin.

The article refers to a letter sent recently by Karunanidhi to Prime Minister Manmohan Singh demanding an amendment in the Hindu Marriage Act, 1955 in order to legalise, at the all-India level, marriages without a priest. Presently, such marriages are recognized only in Tamil Nadu. This demand has been a long-standing one, and was first put forward by E.V.Periyar Ramaswamy Naicker, the pioneer of the anti-Brahmin movement in Tamil Nadu. Periyar was a bitter critic of Brahminical Hinduism, seeing it as a thinly-veiled guise for Aryan, North Indian, ‘upper’ caste Hindu hegemony. He regarded Hinduism as a creation of 'wily Brahmins' to assert their control over the ‘low’ caste majority whom they had reduced to servitude. He believed that the non-Brahmins could effectively challenge Brahmin hegemony only if they developed a sense of self-respect and refused to consider the Brahmins as ‘gods on earth’, a status that the Brahmins claimed for themselves.

As part of the comprehensive plan for cultural revolution that Periyar laid out, non-Brahmins would dispense completely with Brahmins to officiate over their religious and social functions. In particular, the use of Brahmins to conduct the marriage of Hindu couples was to be strictly avoided. In this way, non-Brahmins would be able to assert their equality with the Brahmins and would, at the same time, be saved from paying the Brahmins the hefty fees that they charged as ritual specialists.

That the RSS, and the Hindutva brigade as a whole, are simply a new face of Brahminism is well-known. Little wonder, then, that the Organiser spies in Karunanidhi’s proposal for state recognition of ‘self-respect’ marriages throughout India a conspiracy to ‘meddle with Hindu religion’, going so far as to denounce it as ‘promot[ing] atheism by deritualising and de-Hinduising Hindu marriages’. Clearly, it recognizes that marriages that dispense with Hindu priests, mostly Brahmins, are a potent challenge to Brahminism.

It is, however, careful not to register its protest in a way that reveals its own Brahminical agenda. Instead, it denounces such marriages as ‘anti-Hindu’, as ‘intimidation of Hindu religion’, and as calculated ‘to spite the religious sentiments of the Hindu majority’. The fact that the vast majority of ‘Hindus’ are non-Brahmins, who might well believe that they are equally capable as Brahmins to conduct their own marriages, is, of course, ignored. So, too, is the fact that many Dalit castes and Tribals, whom the RSS seeks to include within the ‘Hindu’ fold in order to augment ‘Hindu’ numbers, continue to conduct their marriage ceremonies without Brahmin priests and dispensing with Brahminical ceremonies.

Any critique of Brahminism, therefore, is interpreted as an attack on Hinduism as such by the RSS. Any move that might challenge the hegemony of the Brahmin minority or make a dent in the citadel of Brahminism is presented as an attack on the ‘Hindu majority’ and ‘Hinduism’, even if such moves as ‘self respect’ marriages might work in favour of the non-Brahmin majority.

As defenders of Brahminical or ‘upper’ caste privilege, Hindutva ideologues see every issue from the point of view of the Brahminical elites. Hence, the reasonableness of Karunanidhi’s demand is completely dismissed, without any recognition of the fact that it might well help the majority of the ‘Hindus’, who are from the oppressed castes, victims of Brahminism. The Organiser sees no merit in the proposal at all, and, instead, makes the ridiculous suggestion that it might be a communist-inspired conspiracy to ‘wean away Hindu youth from the fold of family and religion and make them tools of atheist, anti-Hindu tirade’.

The Organiser ends its vehement denunciation of Karunanidhi’s proposal with by insisting that, ‘as a declared non-believer, Karunanidhi and the [sic.] likes have no right to talk on Hindu religious affairs’. ‘It is for Hindu religious leaders and social reformers to talk on the religion’, it insists. If that is the case, then why, one must ask, do the Hindutva-walas appear to take such an inordinate interest in the ‘plight’ of Muslim women? If non-Hindus and self-declared non-believers have no right to talk about Hindu religious matters, what gives the RSS and its affiliates in the Hindutva camp the right to talk about Islam and shed crocodile tears over the ‘oppression’ of Muslim women?

It is striking how, despite their visceral hatred of each other, Muslim and Hindu fundamentalists think alike on a range of issues. Both speak of religious identity as a monolith, conveniently ignoring the obvious fact that the interests of the elites they champion have little in common with those of the poor.

On the issue of gender, too, both are firm upholders of patriarchal privilege. Like their counterparts among the Muslim clerics, the Hindutva-walas see patriarchal control as essential to their vision of religion, and hence any step that threatens to challenge it is regarded as a sinister anti-religious plot, as the Organiser’s furious reaction to Karunanidhi’s sensible and very welcome proposal makes amply clear.