Is Ian Thorpe preparing for an assault on Mark Spitz's haul of seven golds -- the most celebrated record in Olympic lore -- at the Athens Games? 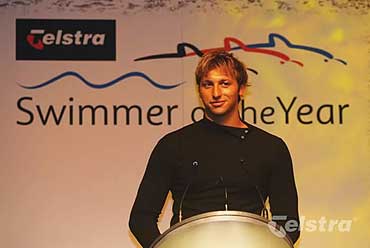 Rightfully, the nickname ‘The Shark’ should have been given to Ian Thorpe. And it would have had it not been for the fact that this sobriquet had long been bestowed on fellow Australian and one of the best golfers the game has seen, Greg Norman. While Norman reminds you of anything but the killer mammal, having gained infamy for wilting at the death, Thorpe appears to be the very embodiment of the fierce fish, both in appearance and intent.

Just 20, Thorpe lives most of his life and makes his living by racing in the water, intimidating the competition with his presence and prowess, and most of the time, cutting them to size. In order to slice through the water with minimum resistance, he dons a full-body black wetsuit, which clings to his colossal frame. His vital statistics: 6 feet 4 inches height, 105 kgs weight, a neck that resembles the stump of an oak tree, an arm span that extends nearly two metres, and feet size -- hold your breath --17. Perched on the starting block, Thorpe cuts an imposing figure.

He’s even more imposing when he hurls himself into the water and propels himself forward in his preferred freestyle stroke, using his large wing span and flipper-like feet. His stroke is characterised by an economy of movement, so much so that he appears to be caressing the water, even as others around him seem to be waging war with it. He motors on, quietly, efficiently, stealthily. The ‘shark’? Ah, but that’s been taken by Norman. He’s been given ‘Thorpedo’, brute power and accuracy in the water personified.

It’s a tag that sits well on his humungous shoulders and mature head. In his short six-year international career, Thorpe has scooped a rich haul in the pool: at last count, 22 world records, 10 Commonwealth Games gold medals, eight World Championship titles and five Olympic medals (three golds and two silvers). Phew! Funny thing is, as a kid, he was allergic to chlorine!

Thorpe is just getting warmed up. Many peers and critics feel Thorpe’s best is yet to come. Such prophecies might well compel rivals to go swimming in less competitive habitats. But for the sport’s afficionados, it’s a rare opportunity to see a champion athlete -- perhaps, the best ever this sport has seen, though Thorpe himself would squirm at such adulation -- at the peak of his powers, competing as much against himself as against rivals, trying to stretch the boundaries of his sport.

Thorpe is currently training and competing with the 2004 Athens Olympics in mind. Athens is still more than a year away, but there are good reasons to believe that Thorpe could launch an assault on the biggest gold medal haul in a single Olympics -- Mark Spitz’s seven golds in the pool at the 1972 Munich Games.

In the lead-up events, instead of polishing his art in his pet middle-distance freestyles (200, 400 and 800 metres), Thorpe is spreading his wings and broadening his sights. In recent months, he’s added the freestyle sprints (50 and 100 metres) as well as the two individual medleys (200 and 400 metres), competing in them sporadically. The Australian Nationals, scheduled later this month, will see him enter four events.

In the recent past, Thorpe has shrugged off probings by intrepid reporters and fans on whether he’ll be taking a crack at Spitz’s record at Athens. But ever since he parted ways with his long-standing coach Doug Frost last year and went under the tutelage of Tracy Menzies, he’s been experimenting with more events.

Ergo, there’s a possibility that Thorpe might sign up for seven, even eight, events in the 2004 Games. He’ll almost surely swim the freestyle in the three middle-distance events and in the three relays (4x100 freestyle, 4x200 freestyle and the 4x100 medley). That leaves him to choose two more events. By mixing it up and testing the competitive waters in his new events, Thorpe seems to be giving himself plenty of leg room to make that call.

Of course, much will depend on how good he feels his chances are in the new events and whether the Athens itinerary favours the pursuit of such lofty ambitions, and allows him a realistic shot. It’s important that Thorpe’s events are spaced out and staggered, so that he can swim on the limit. It’s not just one race; there are the heats, the semis and the finals. Spread out over eight events, that could be punishing.

Taking on a greater workload could backfire for Thorpe, especially in events where he isn’t a country mile ahead of his rivals. Like the 200 metres freestyle, which will see him renew his rivalry with good friend and sometimes nemesis, Holland’s Pieter van den Hoogenband. In his other ‘non-chosen’ events too, the competition isn’t going to make it easier for Thorpe.

Spitz recently said he would love to see Thorpe go for the record, but handed out a word of warning: "I would hope that the people that surround Ian aren't leading him down the path of trying to attempt him to do something that would actually make him look foolish and actually be more destructive to his own inner-person than what it would be to just back off and just say, 'Hey I'm going to the Olympics to win the 100, 200 and 400 metres freestyle, which has never been done before'."

Athletes thrive on challenges, whether it comes in the guise of settling old scores, setting the record straight, rewriting record books or raising the bar. For the best, perhaps, it’s harder to stay motivated and have the recurring urge to compete, as there’s little left to prove. It’s even harder when you’re the best and are a considerable distance ahead of the field.

Boris Becker was a classic example of a champion at the top of his game being knocked off the summit because of a lack of motivation. Explains Bob Brett, the German’s coach during his climb to the top of the world rankings: "Becker just lost it after he became number one. He still had the game, but he had lost it in the mind. He had no drive left to continue playing tennis, leave alone to win."

But then, for every five or 10 Beckers, along comes a Sampras. Or a Hewitt and Graf. In other sports, in the present, there’s Tendulkar, Schumacher, Woods, Marion Jones... These athletes love to compete against themselves, create new challenges and goals for themselves, and rush headlong in that conquest. Thorpe too belongs to this elite grouping, and that perhaps explains his glance at Spitz’s haul.

Thorpe is far from mastering his new events, leave alone being the best in them. Even as he continues to work on understanding the nuances of the new disciplines and snip milliseconds on the timing beam, he’s realistic and humble enough to acknowledge that it’s a tall -- though not impossible -- ask.

Says Thorpe: "The possibility is there, but I don't think I'll win seven. That's such a fantastic achievement, and I've said before it's something I don't think I'll achieve. I'll be trying to swim as well as I can." It’s typical Thorpe, the master of understatement and a picture of humility. That’s quite a contrast to Spitz, who, in his hey-days, was outspoken and cocky. Before the 1968 Mexico City Olympics, the American declared he would win six golds; he ended up with two, but more than made up in Munich.

Thorpe won’t be caught dead shooting his mouth of or making outlandish statements. It’s just not in his nature. To many, even in his own land, it’s surprising and unreal, for Thorpe comes from a country with a rich sporting ethos, where athletes wear their hearts on their sleeves and being jocular is a way of life.

Thorpe is a throwback to the yesteryears of sport, the very antithesis of the quintessential Australian the world is used to seeing on sporting arenas. And therein lies his appeal. Shy, polite, mild-mannered, gracious and articulate, Thorpe is bemused by the public interest in his life and the adulation he gets.

Behind the stardom, flashlights and attention, though, there’s an everyday guy who is extremely dedicated in the pursuit of his art form, one who recognizes the beauty and the bigger, truer purpose of sport.

Before the 2000 Sydney Olympics, his first, he said: "I'm not obsessive as some may think, but I'm obsessed with the Olympics and what good comes from them. It is the one time that the world stops and lets its people do the talking. When prowess dominates over economic barriers. It is the only time when your race, colour, creed or religion is irrelevant. We compete against each other as one world. It is a time when the human spirit triumphs over all and the winner is everyone. Everyone that experiences the Games… I look at performances from past Olympics, and I’m continually inspired by them."

There couldn’t be a nicer, more deserving swimmer to break Spitz’s record.