This victory, hopefully, will make both the teams believe in their abilities rather than the toss of the coin 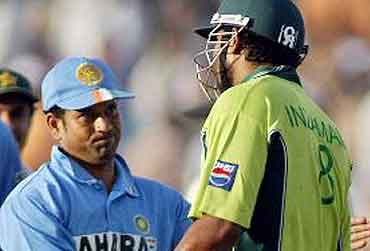 An Indian defeat is never a reason to celebrate. In fact, it leaves Reverse Swing quite distraught. (A celebrity write would have said: 'It (being sad) is the least I can do for the country.')

Today’s defeat in Ahmedabad will rankle more than usual. Not because of any empathy with Mr Modi and antipathy towards 'Mian Musharraf', but because it is one more barb in the hands of those who have been trying to make the case that Sachin does not win matches. Beyond helping the team get to 315 in 48 overs on a pitch where television experts were pitching 260 as a winning score, what could he have done? Bowled 10 overs and taken five for 38? Come on, guys, leave him alone.

Still, there is a bright side to the defeat, for, it is also a defeat of the coin, which had of late become the most potent factor in this India-Pakistan one-day series. Inzamam and Saurav, it seemed, had become more concerned about the tossing form than batting or bowling. (Wonder if there underwent specially organised net sessions for it, too.)

And why not? Match strategy had lately been reduced to a straight line: win the toss. Bat, bat, bat and bat. Make the other team sweat, sweat, sweat and sweat. Then relax and carry out that onerous formality of bowling and fielding, secure in the knowledge that the match is already in the bag.

Column after column, expert after expert, and those include current players, have been talking about the importance of the toss. Statistics have been dished out revealing how many matches India have won after winning the toss and vice versa.

Why? India may have the reputation of lousy chasers, but they have successfully chased over 300 in one-day cricket on at least four occasions, every time against a credible attack. Pakistan hadn’t, till today, but then they had Inzamam in their ranks. It is well established that with him on the crease, no total is safe – a fact that was underlined today. The pitches, graveyards for bowlers, haven’t changed their character during the course of a match. So why this mindset? Why did Inzamam’s face this morning looked like the face of a vanquished warrior. He had merely lost the toss.

Reverse Swing hopes that, now that Pakistan have prevailed with Inzamam’s last ball strike in today’s match, sanity too will prevail. Fine! Don’t listen to Reverse Swing. Just rewind one of Steve Waugh’s quotes, which said that the toss is merely the start of a game, not the end. And then run a check through the number of matches the great man won against all odds.