'When I started playing I was playing against seniors, and now the roles are reversed. One has to love what one does and work hard.' 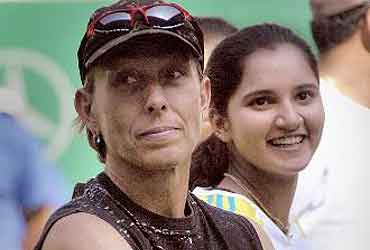 The secret of evergreen Martina Navratilova's success is neither hidden in some age-proof magic potion nor a designer drug concocted at some North American laboratory. But it has got to do with the 'age old' mantra of hard work and enjoying what one does.

At a time when players of her grandchildren's age are struggling to cope with the punishing schedule of professional tennis, the 48-year-old legend has stayed fit and proved to be more than a challenge to her younger opponents.

The legend, on her first official visit to India to play in the WTA Tour Hyderabad Open, put the reason behind her success succintly: "The tennis ball does not know the age of the players."

"When I started playing I was playing against seniors, and now the roles are reversed," Navratilova said on the eve of the $140,000 Tier 4 tournament.

"One has to love what one does and work hard. At the same time play other sports as well and engage in other activities," said the Czech-born American who has 167 singles titles, including 16 grand slams, to her name.

She is also the only player, man or woman, to have won at least once all the grand slam crowns. Is she ever bored of winning so many titles?

"Do you get bored with life?" pat comes the reply.

Navratilova, whose Indian connection has so far been restricted to winning mixed doubles titles with Leander Paes, is fascinated by the country's vegetarianism and sheer strength of democracy.

"Amount of vegetarianism ... it's funny. If you are in Europe, other than the UK, if you say you are a vegetarian, they will try to give you fish," she said.

"I was a vegetarian for seven years," she added as an after thought.

"Amount of people living here... and how it works... it's amazing," she added.

Navratilova retired from singles in 1994 before attempting a comeback in 2003, only to find the 11-month Tour calendar too demanding. She has since then restricted her ambitions to winning in doubles.

She will be competing in doubles event here with Anna-Lena Groenefeld of Germany as partner. That might have dampened the spirit of home fans who would have loved to see her play with local favourite Sania Mirza.

Her decision has been more in keeping with her competitive nature.

Asked for her opinion on Sania, Navratilova said the Hyderabad girl was talented and had the potential to break into the top 50.

"It's important for girls to make a difference and be role models. It's an opportunity for others in India to draw inspiration from her."