Team Must Back Ganguly

The players must look him in the face and convey a sense of complete confidence. If they withdraw in the hope it would give him space to rediscover his belief, they might, unwittingly, end up shattering him completely. 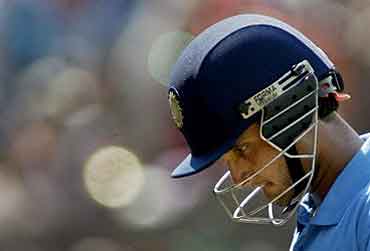 It is this moment in Saurav Ganguly's career where another wrong step and he falls into an abyss. It will be all over. Faced with similar predicament, some captains in the past have willfully withdrawn themselves from the team. Mike Denness of England did it in the 70s.

In our sub-continent though, it is easier said than done. It is like riding the back of a tiger. You just can't get off and not face the consequence.

Everything Ganguly has earned -- fame, money, pride and self-respect -- is slipping out of his hands like quicksand. He is being sucked into oblivion. As he confronts his fate, I hope his teammates are rallying around him.

They must look him in the face and convey a sense of complete confidence. If they withdraw in the hope it would give him space to rediscover his belief, they might, unwittingly, end up shattering him completely. He needs his men in this dark hour and they must not desert him.

In our times, we used to find new ways to help our troubled teammates. Instead of nets, we would order a practice match and bowling and fielding would be designed to allow the troubled soul to rediscover his confidence. A few dashes down the pitch, a few dabs past the slip and the man would be on the move again!

Though like Ganguly, Sachin Tendulkar too hasn't got going but he does not look completely out of touch. It is just that the Jamshedpur pitch had something in it for fast bowlers. Tendulkar was clearly beaten by pace. I have noticed that he has been tentative with his strokeplay on the off-side cordon.

It hasn't escaped the notice of the Pakistan team too, who at one stage, had just two players on the onside. He is tentative with his movements.

It wasn't a pitch like the ones we saw in the first two one-day internationals. The manner of dismissals of India's key players, Virender Sehwag and Rahul Dravid, would suggest it had a lot more bounce and carry.

Dravid was clearly not prepared for a ball which rocked him on the backfoot and lobbed off his bat in the gully region. As for Yuvraj Singh, he is woefully out of touch and like his captain, seems to be searching for the ball. Mohammad Kaif contributed a typical 30-odd innings but all of it wasn't going to carry India far.

Mahendra Singh Dhoni is just learning the fickle nature of the game. His shots carry punch but the jury is still out on his technique.

All of this makes me feel the advantage has passed on to Pakistan. India has its camp in disarray. Besides its batsmen, there are worries about the fitness of Lakshmipathy Balaji and now Harbhajan Singh. Irfan Pathan too, whenever he tried to bowl yorkers, ended up bowling full-tosses. They would be more concerned about whom to play and whom to rest instead of plotting Pakistan's fall.

Pakistan will look to drive home the advantage.

Pakistan did its own funny acts. Thy were well on the way to a total of 350-plus before losing wickets in a heap. The stand-out act between Salman Butt and Shoaib Malik deserved a better score.

While on Malik, I must say his new bowling style made him look no better than Younis Khan or Butt who sometimes turn their arms over. It was as if Malik had gripped the ball for the first time in his life. He has been cleared by the ICC and this must be the new action he is experimenting with. But he looked completely harmless to the batsmen.

Pathan did strike a few lusty blows in a dying Indian response and he can turn out to be handy with the bat in future. He carries power and his defence is tight. His is a similar case to that of Malik, whom we developed as a batsman. Today's cricket is all about maximising the potential of your players.