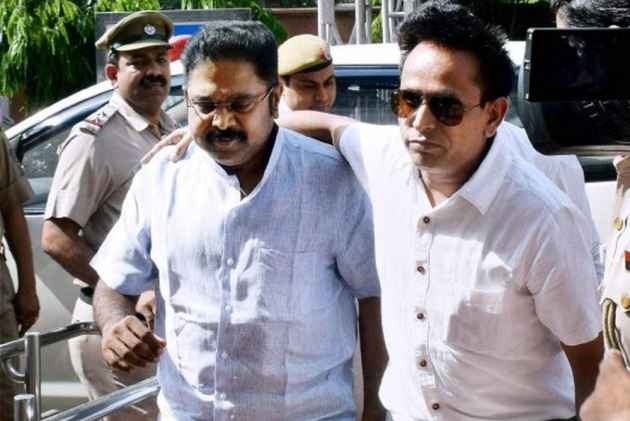 In a dramatic development the Tamil Nadu Assembly Speaker P. Dhanapal today disqualified 18 MLAs belonging to the Dhinakaran camp of the AIADMK under the anti-defection law.

TTV Dhinakaran immediately announced that the MLAs would be challenging the action in the Madras High Court, which had restrained the Speaker from conducting any trust vote till Sept 20 but not taking action against the AIADMK MLAs. “They want to prove their majority by short cut which is legally invalid,” said senior pro-TTV MLA P. Vetrivel.

The disqualification appears like a preemptive strike aimed at bringing down the majority mark to 108 from 117. The EPS government has the support of 114 MLAs who had turned up for the Sept 12 general council meeting that had removed Sasikala from the general secretary’s post.

While 19 MLAs had given individual letters to the Governor in August saying that they had lost trust in Chief Minister Edapadi K. Palaniswami one of those signatories S.T. Jakkaiyan MLA from Cumbum, informed the Speaker that he was withdrawing the letter and expressed his support to the Chief Minister. So his name was not included in the list of the disqualified MLAs.

The Speaker’s action raises doubts if disqualification can apply when the MLAs have not violated the whip’s direction to vote for the EPS government, in the absence of a trust vote. However a legal advisor to the Speaker said that the no confidence expressed against the Chief Minister, who was jointly elected as the legislature party leader, itself amounted to defection and can attract provisions of the 1986 anti-defection act.

Chief Minister Palaniswami, speaking at a public function on Monday morning, asserted that no one can bring down his government and any conspiracy would be defeated with the support of the cadres. A senior AIADMK Minister said that the disqualification was also a warning sent to the dissenting MLAs. “Even if they manage to get a court stay and participate in the confidence vote, they would think twice about voting against the government,” disclosed the minister. He was confident that at least nine MLAs in the TTV camp, housed in a resort in Coorg, would vote for the government in a trust vote.